For the purposes of this article, I will broadly agree that the Romantic period of Western Classical Music runs from 1830 until the early 20th Century. With this slice of musical time firmly in mind, we can observe many notable changes that took place within it regarding the orchestra as an ensemble. It is also important to understand that many of these changes came about as a direct result of the composers who creating new works at the time and making ever-increasing demands upon the orchestra.

By the end of the Classical era in music, the orchestra had developed considerably from when that period began. From an orchestra of perhaps thirty players, numbers were growing towards 50 players on an increasing variety of instruments.

What we discover as the Classical period merges into the Romantic period is those numbers continue to increase. Haydn in his final Symphony, the 104th (1795), scored it for double woodwind, horns, trumpets, timpani and a string section.

By contrast, Mahler in his Eighth Symphony (1906) scores it for considerably larger forces including, four flutes, clarinets (plus bass clarinet), bassoons (plus contra-bassoon), eight French Horns, three trumpets, and trombones, timpani, organ, two choirs, eight soloists and a very full string section consisting of some seventy-five performers. Only a little over a century separates these symphonies but the orchestra they employ could not be more different.

The instruments themselves were changing too. Clarinets only became an orchestral instrument towards the end of Mozart’s life encouraged by his relationship with the virtuoso clarinetist Anton Stadler. In the Romantic orchestra, we find composers writing for a whole family of clarinets that would never have been an option before. This included clarinets in Bb/A/Eb and the bass clarinet.

The flute section would now include a piccolo that added the possibility of an extra octave to the woodwind family. In addition, the contra-bassoon gave the lower end of the range more depth with its dark, reedy voice. Further on in the century, the saxophone makes an appearance or two in the ranks of the orchestra bring with it a completely revolutionary sound.

By the mid-nineteenth century, brass instruments had the addition of valves, first invented by Heinrich Stölzel around 1815. This made the option of composing in more difficult keys containing many sharps or flats possible which was important as the boundaries of tonality were being increasingly stretched. The range of these instruments also extended as their build quality evolved alongside their reliability and tuning.

French Horns, once a matched pair in the previous period became the quartet, sextet eventually to octet giving rise to rich walls of brass chords. Mutes became more widely used in the Romantic orchestra’s brass section adding the possibility of vivid changes of colour to the composer’s score.

The string section was now divided into clear sections in their own right. At their largest the first violins could number as many as twenty players; the second violins twenty; the violas twelve; the cellos ten and six to eight double basses. Composers had the option to subdivide these sections into smaller sections in their scores allowing for huge dynamic contrasts and changes of texture within their music.

The percussion section was no exception to the changes and development of the orchestra. The lonely timpani is soon joined by an array of cymbals and gongs, wood-blocks, bass drums, tubular bells, anvils, triangles, side drums and vibraphone to name but a few additions to this vital part of the orchestra. A range of devices for playing these instruments emerged.

Cymbals could be struck together or suspended on a stand and played with a variety of hard to soft sticks or beaters. Likewise, drums were not simply hit with one type of stick but ones with wooden, leather and eventually nylon ends, each giving a very different tone.

It was not uncommon for a small range of other instruments to join the forces listed above and compliment the evolving orchestra. Harps become a frequent visitor to the concert platform, along with a concert piano and celeste. In some Romantic works, such as the Symphony No.3 by Saint-Saens, a pipe organ is asked for in the score and in this piece used to great effect.

As in Mahler’s Eighth Symphony, the orchestra was on occasions united with solo voices or a choir or two, bringing the total forces available to the composer beyond the wildest dreams of the earlier Classical composers.

As a result of these gradual but momentous changes, composers during the Romantic period and those of the periods that followed had an extraordinary array of alternative sounds available to them. Each section of the orchestra could be sub-divided into smaller more intimate groupings. The combinations of possible sounds and textures that could be created through blending instrumental groups became almost limitless and gave rise to some of the most wonderful music ever written. As the focus of the Romantic composers was to express their deepest feelings and create whole, complete sound-world never before heard, these changes were vital to their success.

The evolution of the symphony orchestra we know and recognise today differs very little from the one the Romantic composers at the end of the nineteenth-century were composing for. Whilst the musical focus may have changed for composers of today, the largest musical ensemble available in Western Music remains broadly unchanged today. Playing techniques have continued to develop and tonality was finally destroyed by Wagner, but the symphony orchestra has survived. 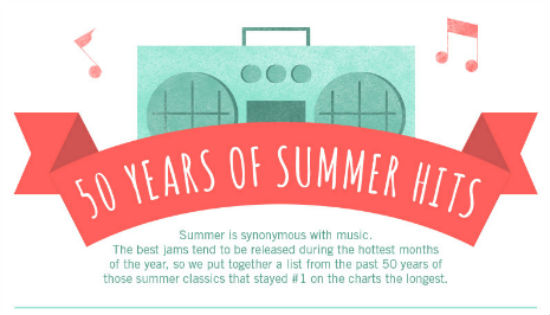 D Grant Smith - Sep 1, 2015
This infographic takes us back to 1965 and cycles the songs that have trended #1 for the hits of summer. It's interesting to note...