For the purposes of this article, I will confine my selection of violin works to the Baroque, Classical and Romantic periods of music. Once you stray into the pieces of the 20th or even 21st century, there is no shortage of extremely difficult music which makes the choice more complex and even less enjoyable.

The other basis for my brief survey of truly challenging violin pieces is the technical and expressive demands of each individual piece, keeping in mind that the instrument itself developed over this time period as well as the technical prowess of the performers.

J S Bach was renowned for the ability to improvise immensely complex pieces on the spot and his reputation as a formidable organist was deserved. Even though Bach’s wove beautiful polyphonic musical textures through many of his works this was never at the expense of melody. This gift alongside Bach’s immeasurable ability to create robust musical structures is in evidence in this partita.

This partita is a reasonably late piece of Bach and shows Bach’s full mastery of the violin which he studied as a young man. The Partita was a musical form popular in the Baroque period and comprised of a number of movements based on dance–forms from the Renaissance.

In this partita, they are as follows: Allemande; Courante; Sarabande; Gigue and Chaconne. Most violinists consider that the faster sections of the partita are the easier to play but Bach saved the greatest test for the final section; the Chaconne. (The chaconne itself is thought to have its origins in Spain).

Bach takes this old musical form and composes an inspired eight-bar theme which is then followed by thirty-two variations. From relative simplicity springs one of the most difficult violin pieces Bach ever wrote and one of the most beautiful closing sections to any piece of music.

You only need to listen to the first five minutes of this piece to realise that it is a magnificent piece from Beethoven’s pen as well as a tremendous feat of performance skill for both the violinist and the pianist alike. Like the ‘Eroica’ Symphony that shortly followed this composition, there is a sense of the heroic and of struggle. It forms a central focus to many of Beethoven’s that followed.

The sonata was written originally for George Bridgetower but following a disastrous first performance, Beethoven erased the dedication altering it to the now more familiar, Rudolph Kreutzer who was an outstanding French violinist.

As you may expect, this sonata is made up of three movements, each with its own difficulties. Beethoven opens the sonata with a short lyrical introduction in the tonic minor (A minor), before launching into a hair-raising presto that forms the main part of this movement.

The second movement is a slow one marked Andante con variazioni interestingly written in F major. As a final movement, Beethoven chooses a rondo form, bringing the work to a spirited close. The whole sonata requires huge levels of technical control together with vast amounts of energy. It is a deeply lyrical and intense work for only the virtuoso to attempt.

We return for this selection of pieces to the world of the solo violin. These pieces were composed in batches over a fifteen-year period for solo violin and together make one of the most formidable collections of pieces ever composed for the instrument. Paganini was a legendary virtuoso performer. There are many accounts of his technique being so incredible that rumour spread of his association with the Devil himself.

A caprice is a piece that is usually lively and one capable of almost instant changes of mood or direction. Each of these caprices Paganini composed is full of character, together with a specific technical challenge that the master himself would have ably demonstrated.

As you listen to each of the works do not be fooled into thinking that they are purely technical exercises. Each Caprice is uniquely musical and similar perhaps to the miniatures Schumann wrote for piano. As you listen to the Caprices some violin techniques to listen for are double, triple, quadruple stopping of the strings; harmonics; very fast passagework; bowing and plucking simultaneously and double-stopped trills.

It is the last caprice that is perhaps best known amongst the twenty-four as composers who came after Paganini has arranged and made extensive variations on this compelling melody. Rachmaninov’s “Rhapsody on a theme of Paganini”; Eugene Ysaye – “Variations on Paganini’s 24th Caprice”; Lizst – “Etudes d’execution transcendante d’apres Paganini”.

I realise I’m stretching my definition of Romantic music with this choice but it is a vitally important work to violinists across the world as well as being one of the most difficult pieces written for violin and orchestra. Sibelius is an often neglected composer whose music follows on from the great Romantic composers before. His facility to conjure the landscapes and images of his homeland of Finland are unparalleled.

This Violin Concerto is a truly virtuosic work drawn from Sibelius’s own experience as a violinist himself. In his earlier years, Sibelius was determined to become a virtuoso soloist on the violin attracting compliments like genius from his teachers at a Helsinki University. Unfortunately, Sibelius suffered significantly throughout his life with depression and eventually alcoholism and so resigned himself to the life of a composer, not a performer.

It is perhaps all the more remarkable then that no trace of any personal weakness is evident in this masterful work. Even the revised version of 1905 that ‘simplified’ passages for the violin soloist, still leaves an immensely daunting task ahead for the instrumentalist learning the work. (Listen for the independent rhythms the soloist has to play following the climax of the 2nd movement).

The movements are as follows: 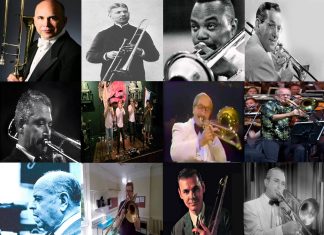 CMUSE - Jan 25, 2018
https://www.youtube.com/watch?v=Ysqj3Ppcb0g&feature=youtu.be Feel free to Subscribe to Our YouTube Channel if you like this video! The trombone has always played a critical role in brass parade bands. Around the...