Gibson guitars are one of the most sought-after. They give you the perfect blend of durability, performance, and design aesthetics, and have a luxurious feel.

They’re very beginner-friendly guitars too, and no Gibson model overloads itself with a plethora of features that end up becoming a steep learning curve. These guitars are dependable and always there to produce rich and warm music.

Two of the most popular picks from Gibson include the J35 and J45- both of which are guitarist-favorites.

However, choosing between the two can be hard as they look pretty identical (both are dreadnought-shaped) but have a huge difference when it comes to the price point.

So to help you out, we’ve reviewed both the J35 and J45 models below. Let’s dive in!

First up is the Gibson J35, which is a vintage-looking acoustic guitar. It’s not in production anymore and is discontinued, however, the existing models are relatively cheap and cost between $1600 and $1800.

It comes with a black hardshell case, which is pretty standard, along with 4 gold latches. 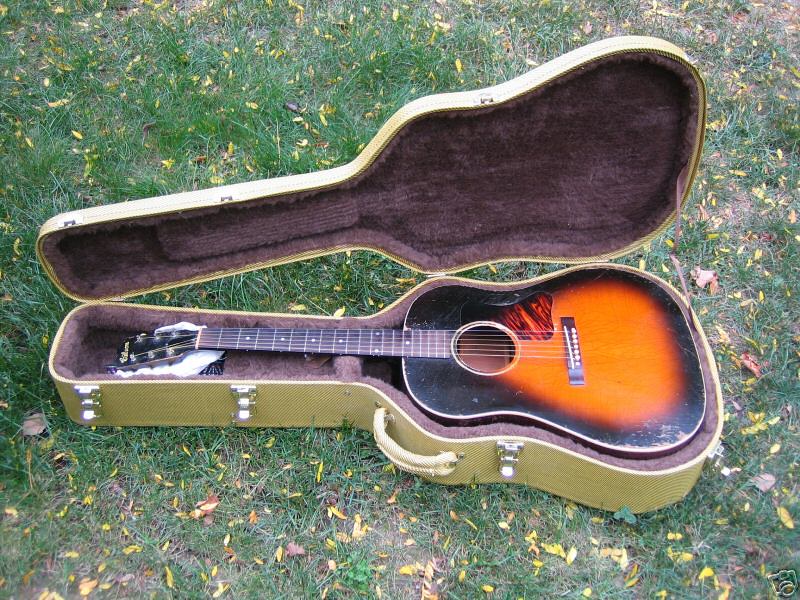 The J35 is a quality hand-crafted guitar that follows the flat-top and dreadnought shape of most guitars. It produces the most amazing full-body acoustic tone, thanks in part to the solid tonewoods it’s made from.

The top bit of the guitar is Sitka spruce while the back and sides are made of mahogany. These materials produce a warm and expressive tone that is popular among artists, record producers, and mixing engineers.

This dreadnought guitar has a short-scale neck with a neck-to-body joint and dovetail. These provide easy playing and smooth tonal response.

The bracing pattern is scalloped X, which means you get a lot of control on the tonal balance and can easily maneuver through an audio’s low, high, and midpoints. The fingerboard and bridge are made of rosewood. 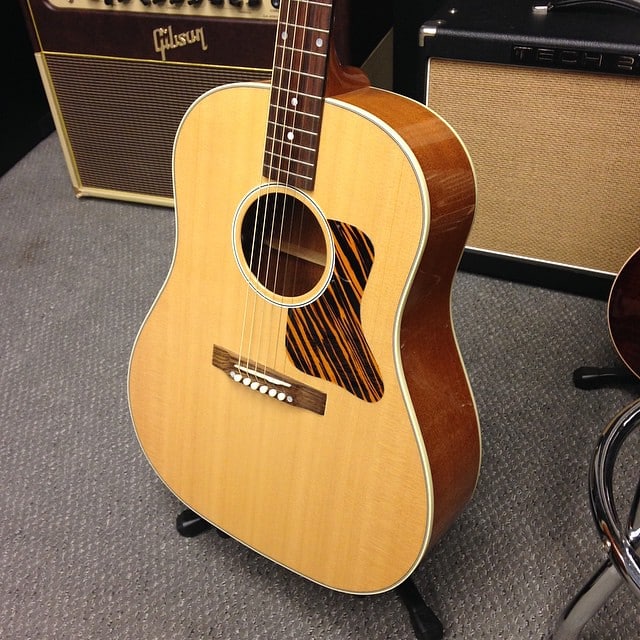 While dreadnought shapes are sometimes considered to be too bulky, this model has a nice sleek finish. The shape is designed with the utmost comfort in mind- you can play for hours on end without feeling burned out.

Plus, the vintage aesthetic enhances the warmer tones that the guitar produces, going with the overall theme. The spruce guitar top is accompanied by a bone saddle.

The guitar also packs tuners that are nickel-plated, along with white vintage or classic button tuners. The finish on the guitar is acrylic and natural.

The finish on this guitar is perfectly durable and can withstand minor falls, scratches, and chemical repellents, even after years of usage.

To improve sound quality, the J35 model lets you pick between left and right-hand playback. There’s an L.R. Baggs Element, which is fitted in a small soundhole along with the volume control and a simple 9-volt battery.

The lower-end chords sustain a note just as well as the midpoint and can be added to complement the open chords or strings.

There are some minor flaws in these guitars. For example, there’s no strap or button added to the side of the neck where the treble lies, nor is there any strap around the neck heel.

Now let’s talk about the Gibson J45. This is the newer and slightly more expensive version of the Gibson J35, and it’s an excellent acoustic guitar. Gibson J45 is still in production and you can nab the Standard version for $2850.

Gibson J45 has a pure mahogany body and neck. This solid wood gives the guitar its distinct luxurious feel. The fretboard or the fingerboard is made of rosewood, but it blends well with the rest of the guitar.

As for its dimensions, the J45 is structurally identical to the J35, though the finish on it is different. J45 has a distinguishable Vintage Sunburst finish instead of the dark brown color that the J35 dons.

The J45 is surely more eye-catching and attractive when it comes to design.

As for the size, the J45 is perfect for adults. It’s neither too big to require large hands to strum the chords, nor is it too small to slip away from the grip. It looks quite like a Martin dreadnought- it has sloped and rounded shoulders with smooth curves.

The J45 guitar top is made with solid Sitka spruce, which is responsible for giving the punch and clarity Gibson guitars are known for. This, combined with the mahogany wood body, makes sure that the sounds produced are darker and more reserved.

To summarize, the J45 is very similar to the J35 from a design aspect, though the former is more vibrant.

Moving on to the electronics and hardware components, the first important thing to notice is the L.R. Baggs element, which is situated right underneath the saddle, fixed on the upper end of the guitar soundhole.

Even though the element is placed below the saddle, there’s no dampening or reverb. The natural tone of the audio is preserved, then compressed.

The soundhole contains a control setup where users can adjust the loudness and manipulate the tone of their music. The interior bracing is a hand-scalloped X, which creates great resonance. 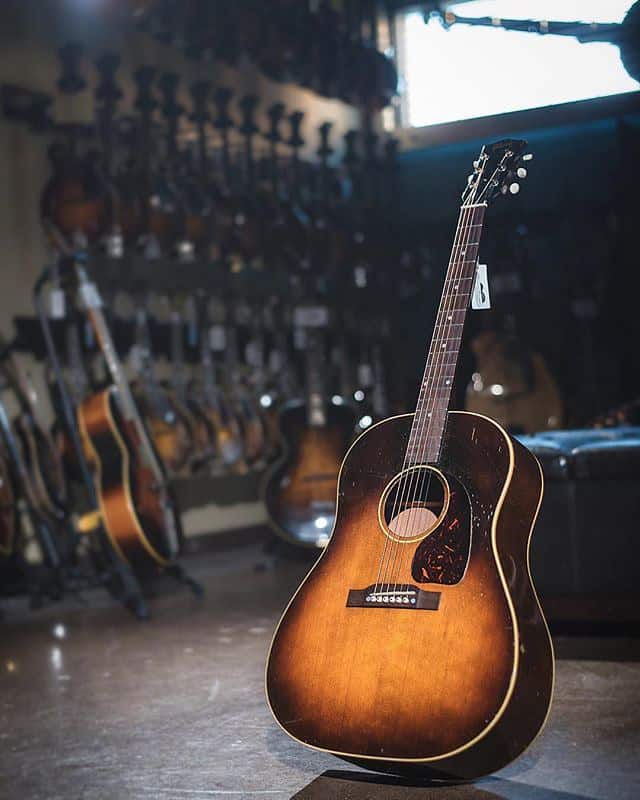 The guitar has cut down on unnecessary dials and knobs, so there are no external problems regarding playing There are no exterior knobs or dials that will obstruct your playing sessions here.

The hardware has a solid interior bracing in a hand-scalloped X design created to increase resonance.

The J45 has premium weighted bridge pins. The weight is increased by using extra material, which helps sustain the strings a bit better.

The guitar has closed-gear Rotomatic tuners made from Grover Nickel. These are easy to run and fine-tune your audio live while also keeping your tuning precise.

The J45 is kind of a unique guitar, mainly because it focuses on perfecting mid-range tones and treble in comparison to the loud stage acoustics.

The booming quality of sound is limited thanks to the smooth mahogany body. The treble range is much enhanced from the older models too.

One thing you’ll notice about a change in sound quality is that if you cut the chords off a lot or switch between two very distinct chords, you’ll hear some dampening. It’s not a dealbreaker issue though.

The guitar is good for players who like strumming too- in fact, the outboard mic is designed to make strumming audio sound heavenly.

The overall sound quality is very versatile, though there’s generally extra warmth and richness. The mid-tones are quite warm while the bass packs a tight punch.

Before we pick a winner between the two guitars, it’s important to note that both these Gibson models are excellent choices and there are only some notable differences in the quality of music produced. You can’t go wrong picking either guitar in this budget.

However, the Gibson J45 does hold advantages over the J35, which is why it’s the best pick out of the two.

While yes, the J45 is a little too warm and rich for some people, the tonal qualities of the J35 are easy to replicate with the J45 as you gain experience playing.

For example, you can play closer to the bridge to get the signature J35 sound and make the experience less immersive. J45 also has greater resonance and a more refined look. All in all, it’s the best out of the 2.