The tone you desire has to be delivered by each part of the instrument. Stringed instruments, for example, have nuts as one of their most integral parts.

It is the nut (saddle) of your instrument that determines overall performance, playback, tone, and clarity. There are many kinds of guitars on the market these days, and that is especially crucial.

Therefore, you should be careful not to mess it up in any way. In most guitars available on the market, you’ll find plastic nuts. 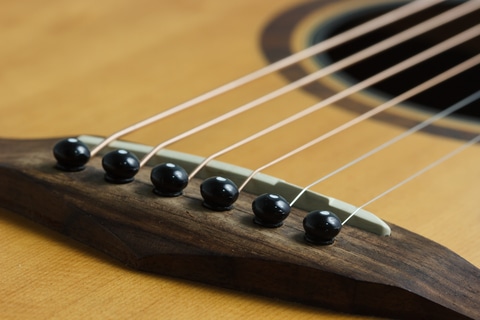 You should also be aware of two natural materials often incorporated into the guitar nut, such as Tusq and Bone, which will enhance your overall experience.

Choosing Between Tusq vs Bone Saddle

Natural bone nuts or saddles create a warmer, fuller tone than synthetic Tusq, which produces a bright and clean tone. Bone nuts differ from Tusq in that they are made of animal bone rather than synthetic materials.

Saddles with these characteristics are typically more durable, clearer, and sharper. To understand this better, imagine dropping the tusk and bone on a tiled floor.

Using the bone will produce a ring, but using the Tusq will produce a more melodious one. A Tusq saddle produces a consistent sound because it is manufactured.

Bones may have soft places, just like ivory, making it difficult to slot them to the exact depth you need. They will also wear unevenly, causing string buzz and reduced sustain as a result.

Oiling them will also be necessary frequently. While Tusq XL nuts are capable of self-lubrication, Tusq XL nuts have uniform wear patterns.

Natural materials such as bone and ivory can vary in composition, for example, they may contain hollows or soft areas that hamper slotting.

They will also vary from blank to blank, so you will have to try several different ones in order to find the one that works best for you.

In contrast, Tusq is made from synthetic materials, which allows it to be consistent between nuts as well as within. If you purchase one off the shelf, you will find that it is exactly what you expected.

This synthetic polymer was invented by Dave Dunwoodie in the 1980s. The idea of owning a guitar that not only plays better but also feels luxurious was popular worldwide when bones and ivory were widely used for exotic guitars.

The reason for this is that your guitar contains real ivory or bones from rare animals. During that time, exotic guitars were often made from bone and ivory. 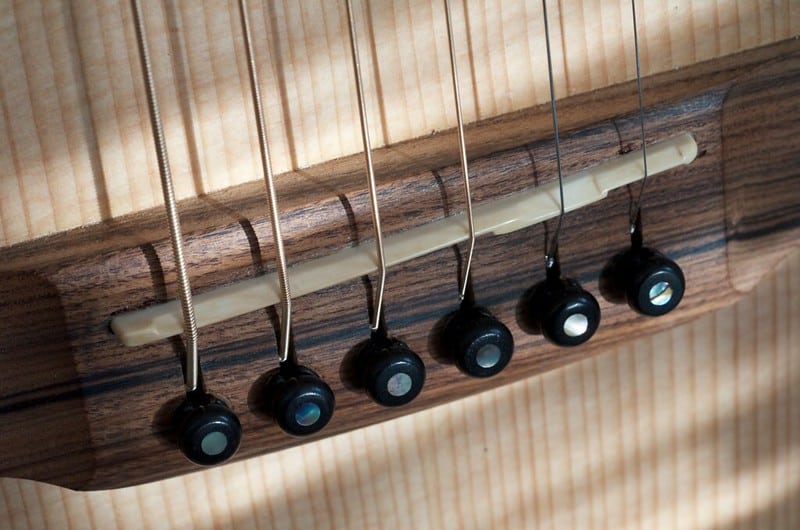 There were many famous jewelry pieces and accessories from that period that were in that situation. By contrast, TUSQ is completely synthetic. Performance-wise, there is, even more, to be impressed with, according to some guitarists.

To acquire superior guitar nuts, one should, at the very least, pay careful attention to this aspect when shopping for them. A major advantage of using Tusq for guitars is that it is an entirely synthetic material.

Consequently, your nuts are perfect and there are no lagging points in them due to the surgical design of all of their features and characteristics.

Due to the fact that there are no soft spots on bones or any other issues that could appear on the ivories or bones, you will have a significantly better and more consistent experience with the TUSQ.

You can take care of a guitar as much as you want but eventually, the saddle nut will wear out. By limiting wear and tear, it is possible to reduce the amount of damage. 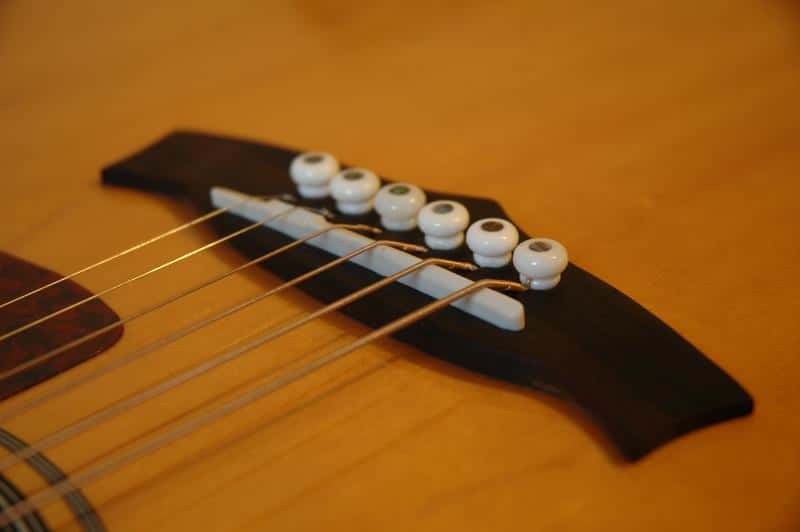 Due to its polymer construction, TUSQ will sustain significantly less damage than ivory or bone due to its less consistent wear and tear.

If you do this, you’ll both improve your general playing structure and your guitar tones. Due to its name, you’d think it was ivory based on its appearance. You may also confuse it with genuine ivory due to its appearance, which mimics the same qualities.

Regardless of what you plan to do with your guitar, that will be the best thing for you to enjoy it. TUSQ will not deteriorate, lose its luster, or turn yellow over time, which is another cool benefit.

You won’t have to worry about it going bad, looking dull, or catching yellowish color. An acoustic guitar that costs between $500 and $2,000 typically contains a Tusq saddle. People may prefer Tusq’s clear, bright tone over Bone’s.

To have a richer and better playing experience with a variety of tunes, some guitarists believe that natural materials like bones are still the best choice. All you need to do is ensure that you are picking the tones correctly.

TUSQ and other synthetic materials are being advocated for guitars and other applications by an increasing number of people who are becoming more environmentally conscious.

Different kinds of bones have been used for making these guitar saddles in the past. Today, most bone saddles used on guitars come from Chinese cows or oxen, because they wear out more slowly and have a greater resonance.

Despite the benefits of bone saddles, there are a few disadvantages you should keep in mind before opting to use one. 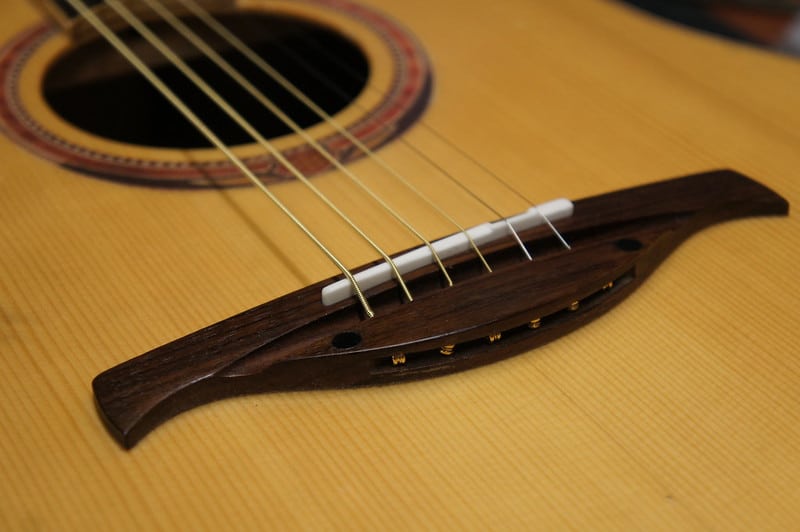 Despite all of the quality assurance efforts, because the bone is an organic material, it’s possible that a bone saddle won’t sound very good when it’s installed.

You will need to decide whether you feel comfortable installing those on your guitar before proceeding. Another reason some people may avoid a bone saddle is the fact that it is made from the bones of animals (considering it is against nature).

The wear and tear that bones endure are likely not to be uniform because they are composed of natural materials, so different areas of the bone will deteriorate at varying rates. 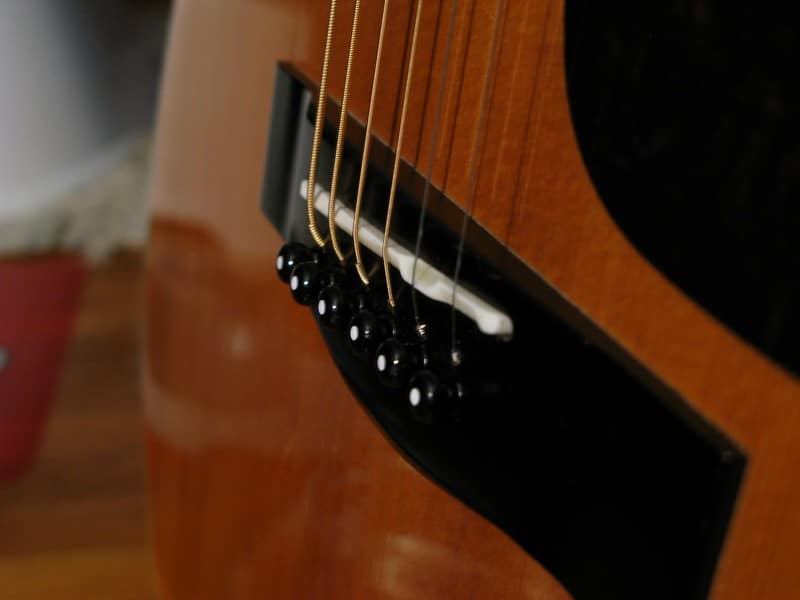 As a result of the bone saddle’s dynamic nature as well as the uneven wearing, you can anticipate other similar problems.

The list includes things that you probably don’t want your guitar to have, such as tonal instability and other issues of the same nature.

The density of bone makes it a great choice for picking up richer tones in a way that is both deeper and more effective than using any other material.

Benefits of Using the Bone Saddle

Using the Bone Saddle does provide some benefits, among them providing you with some of these benefits. Since they are not faced with such a problem, they are not able to select the appropriate tones.

A saddle’s density is not uniform, and there may be areas where the bones are denser than others.

The Bone Saddle will require you to be cautious about the consistency of the tone, so you might have to deal with some issues when using it.

Thus, the Bone Saddle is recommended only for professional guitarists with years of experience. A newbie may find it difficult to manage music tones on a guitar with a bone saddle.

A guitar nut plays an important role in overall appearance and performance. So you should be very careful when choosing the material for a guitar saddle.

Two of the widely used and the best materials used to make these nuts are described above. All the manufacturing and performance differences are briefly explained.

If we have to choose a winner, TUSQ will stand out in performance and durability. Tusq is naturally lubricated, which can help with tuning stability, and it will not have soft pockets like bone does.

It makes it superior to the bone in this regard. Furthermore, a TUSQ saddle is not susceptible to excessive wear and tear as the bone is.