In the world of musical instruments, guitars have always enjoyed a prominent position. It is a recognizable instrument even for those who know little about music.

While we all love listening to the guitar, playing it is an entirely different experience. Studies have revealed that people who play guitar experience less anxiety and tend to be more confident in their lives.

That being said, guitars come in various shapes and types. Among all the styles, folk and dreadnought guitars enjoy massive popularity. They have been used for decades now and are pretty comparable.

So, it could be a stressful job for a newbie to choose the right one. If you are unsure which one to buy, read on to know which guitar is right for you.

Below is a detailed comparison between folk guitar and dreadnought guitar.

Any musician would tell you that the folk guitar is one of the most sought-after guitars in the industry. These guitars are mainly known for their attractive design, similar to classical guitars.

They can play almost every genre and have been used to record thousands of songs. They tend to be relatively smaller than their classic counterparts and have significant curves. 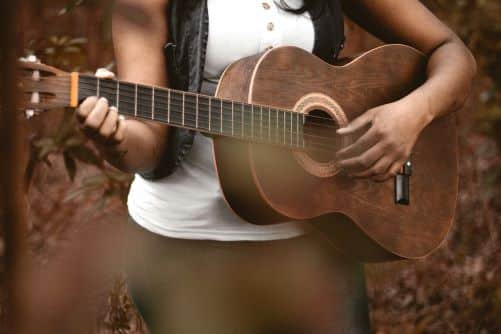 Most newbies often take folk guitars for acoustic guitars. As a matter of fact, they both happen to be quite similar, and even their tones sound similar to some extent.

Since folk guitars come with thinner strings, they are an excellent choice for anyone who likes strumming acoustic guitars.

However, as mentioned earlier, they are a bit smaller than acoustic and dreadnought guitars, which is why they are not as loud, and you get a gentle tone, as you generally see in folk music. This makes them a fine choice for both fingerpicking and strumming.

As far as their construction is concerned, folk guitars also tick this box. The strings are connected to the tuning machines in these guitars. They have a size of 000, which means that they are ideal for fingerstyle playing and are small enough to carry around simultaneously. 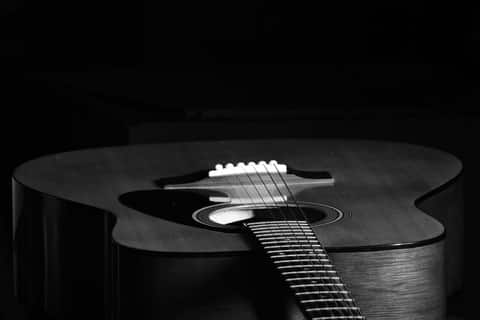 If you are a guitarist who often travels with the guitar, you can’t go wrong with a folk guitar. However, it is pertinent to mention that some folk guitars are also available in relatively bigger sizes.

Apart from that, another thing that sets the folk guitars apart from the dreadnought ones is that they both use different tuning pegs. You will notice this clear difference as soon as you see them from the top.

Moreover, these guitars have a rich bass, shiny coating on the top, and a balanced midsection. All these design factors of the folk guitar make it a primary choice for people who are into folk music.

Another cool thing about folk guitars is that they feature thin strings compared to dreadnought guitars. This also significantly impacts playability as the sound coming from light strings tends to be brighter.

These factors contribute to a smooth and well-balanced tone that all fingerstyle guitarists love.

In addition, it is also seen that they are a bit easier to play. Thanks to less tension, these guitars need less pressure to fret. They also feel great while playing, thanks to their smooth texture.

However, a few caveats have also been associated with thin strings. Firstly, they require more attention and care as they are likely to break relatively easily.

Of course, light strings mean that they need less pressure to break. Furthermore, their sound is not as loud as you get with thicker strings. 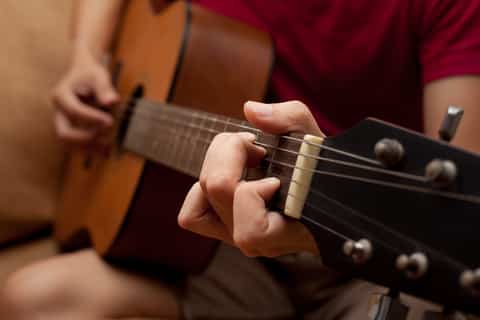 Although folk guitars can be used to play multiple genres, they are particularly preferred for playing classical and folk songs. However, they are not recommended for performing against big crowds since they have a softer tone.

The dreadnought guitar was designed in 1916 and then launched in 1931. It was not very popular back in the day for some reasons, but it gained musicians’ attention as it evolved over time.

Today, it is one of the most liked guitars in the music world and is widely used by people who are just getting started with guitars. 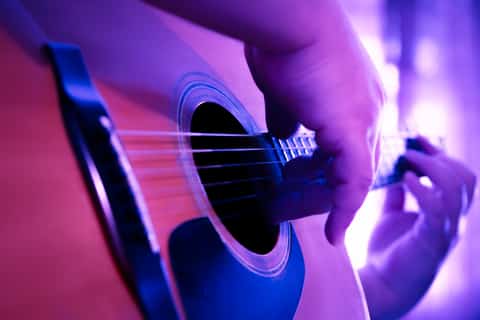 Dreadnought guitars are mainly known for their large bodies. They have broader and much larger bodies than folk guitars. As a matter of fact, their name comes from HMS Dreadnought, a royal navy battleship that is known mainly for its colossal size.

The size of dreadnought guitars has reduced a bit as it evolved over the years. At the time of its release, it was much bigger than what we have today.

The models that we see today bear a resemblance to the design proposed by Martin in 1931. Unlike previous dreadnought guitars, that guitar model was made of rosewood.

The dreadnought guitar is all bells and whistles when it comes to performance. Thanks to their larger bodies and massive soundhole, they produce a beefy and warmer sound. These guitars are designed to maximize sound, volume, and projection.

This makes the dreadnought guitars a great choice for performing in auditoriums in front of a big audience. They deliver the right sound that you need to rock the arenas.

As for construction, most of the dreadnought guitars come with mahogany back, neck, and sides and a rosewood bridge and fingerboard. The bridge of these guitars comes with a saddle and several pegs.

Essentially, the pegs keep the strings attached to the bridge. If you are to change your strings, you’d need to take the peg out and then replace your strings.

Most of them feature tuners in the headstock, giving your tone stability. All in all, the dreadnought guitars would be an excellent choice if you are looking for a sturdy guitar that can handle heavy strumming.

Another great thing about dreadnought guitars is that they are readily available in the market, and you can easily find one that suits your budget. Some companies even offer to custom build these guitars as per the users’ needs.

Having said that, there are also a few downsides to using the dreadnought guitars. For starters, their huge size could be the elephant in the room for some people.

They have a square-like design on the bottom and shoulders, which is only suitable for tall people. Apart from that, the subtle curves also impact their tone.

Their larger size also directly impacts their weight, and they weigh far more than most other guitars on the market. They could be a hassle to carry around, and if you travel a lot, we can only send you sympathies. 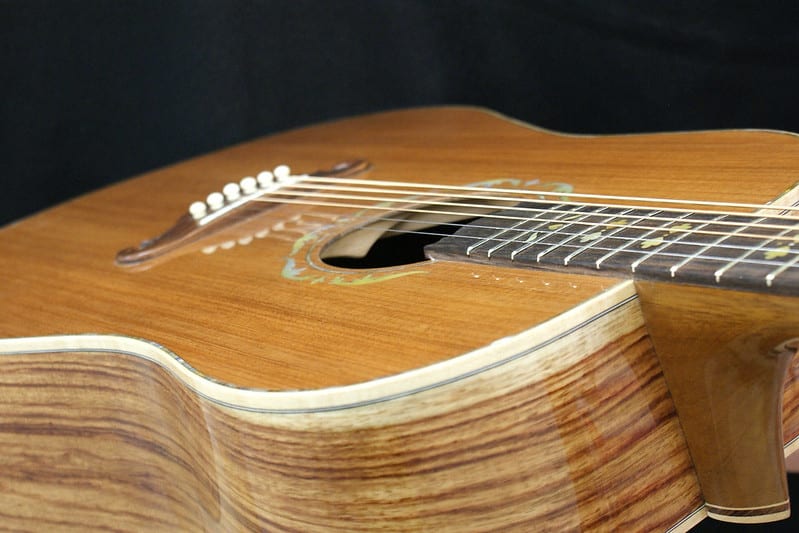 Another good thing about the dreadnought guitars is that they usually come with steel strings that deliver a darker tone. They are more durable than folk guitars and can withstand heavy strumming.

However, these strings are also harsh on the hands, and over time, they can hurt your hands big time.

Apart from that, there are times when you are not looking for a loud tone. If you are playing at your home, your neighbors probably won’t like your dreadnought guitar. And yes, you may find it too noisy if you play it in an echoey room.

Folk guitars utilize thinner strings, and since they are made of poplar, the sound isn’t as rich either. Compared to a dreadnought, they are also much smaller in size.