Although it’s unlikely you’ll come across many of these instruments in a symphony orchestra any time soon, they all are top of the list if you’re looking for the world’s largest playable musical instruments ever made. Some have combined elements from two instruments, others have taken advantage of incredible natural phenomena, and then there are those that have just been dreamt up purely from imagination. Let’s take a look at some of the world’s largest musical instruments. 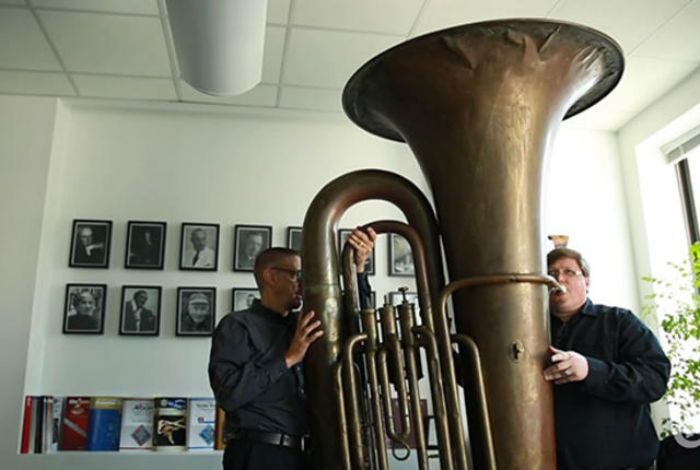 This tuba stands out so much from the rest that it even has a nickname: Big Carl. As we reported last year, a music store in New York came into possession of it around 1900 and has kept it in the shop ever since. It is estimated to weigh three times more than a normal orchestral tuba and requires two people to play it properly. Unsurprisingly, as with many things claiming to be the largest, big Carl has some competition. A giant tuba is exhibited at the Musikinstrumentenmuseum in Magneukirchen, Germany, and it is claimed to be the largest tuba in the world which is playable.

In July 2011, the construction of a mammoth six-meter-high drum with a diameter of 5.45 meters was completed at a traditional music center in South Korea. It was built using pine wood and 40 cowhides. The Guinness Book of World Records recognises it as the largest drum in the world, surpassing by far several large bass drums owned by American universities that had each made a claim to the title. You can hear it being played here. 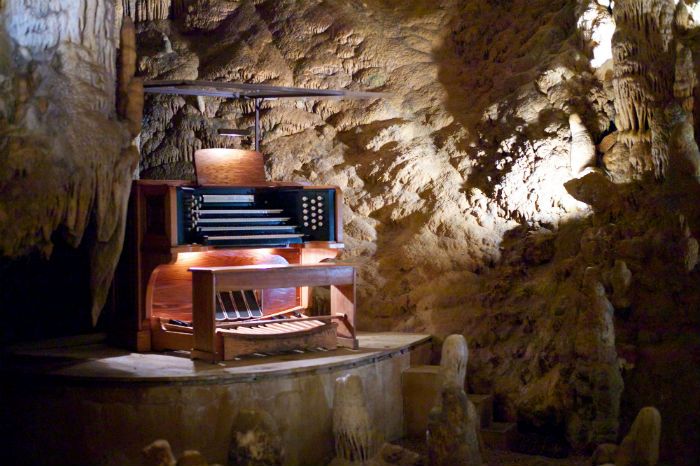 The organ was constructed in the 1950s in the Luray Caverns, Virginia, USA. It stretches across an area of three acres and can be heard throughout the 64-acre caverns. Leland Sprinkle, who was responsible for its creation, used stalactites found in the caves to produce the musical notes for the instrument. Some reports say that he tried over 2,000 stalactites out before he obtained the correct sound. The stalactites are struck by rubber mallets controlled by an organ-style keyboard. As you can hear in this performance of Beethoven’s Moonlight Sonata, the sound it produces is incredibly clear, and it’s not surprising to learn that the area had been known for its musical characteristics long before the organ itself was built. 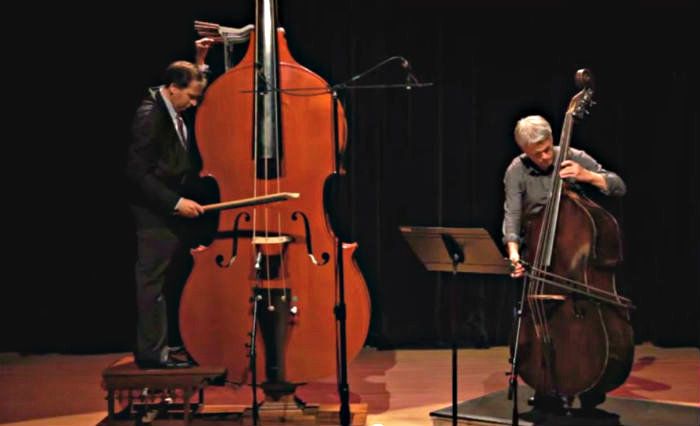 First built in Paris in 1850, the octobass is the largest string instrument ever created. It is tuned two octaves below the cello and some of its low-end notes are on the threshold of human hearing. Understandably due to its size, it is an instrument usually played by two people, with one operating the bow and the other doing the fingering. However, there are levers that can be used to push down the frets to get the right note. There isn’t a huge selection of repertoire written for octobass, but here you can see it in action performing a Bach piece with four double basses at a recent festival in France. 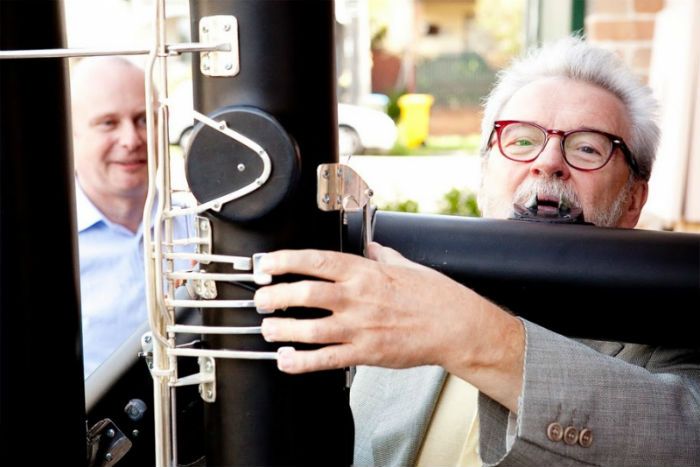 If you thought the contrabass or even double contrabass flute was as low as it got, it’s time to think again. The hyperbass flute is the equivalent of the octobass for the flute family. It is built from PVC and wood and is composed of 15 meters of tubing. Italian flutist Roberto Fabbriciani is one of the few musicians who perform with the instrument.

Biggest Playable Violin Ever Made 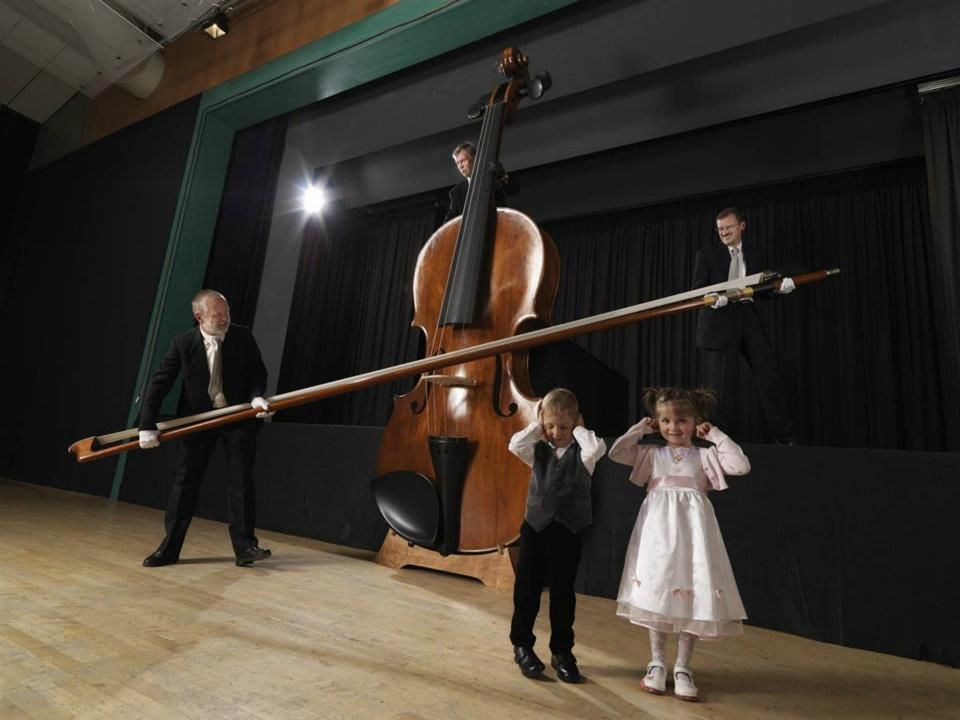 Officially entered into the Guinness Book of Records (2012) the violin is constructed by 15 violin makers from the town of Markneukirchen, Germany and it stands 4.27 meters tall and the bow is 5.22 meters long. Apparently a piece has already been composed especially for it by composer Stephan König: Rhapsody for Giant Violin and Orchestra.

The Earth Harp is the longest stringed instrument in the world, with strings that extend up to 1,000 feet in length. The Earth Harp’s first installation featured the resonating chamber mounted on one side of a valley with the strings stretched out nearly 1,000 ft to the other side. How does the Earth Harp work? The Earth Harp is played using violin resin on cotton gloves and musical bows. The performer’s hands are run along the strings to created beautiful cello-like tones. The act of rubbing the strings creates a longitudinal compression wave.

This 2.5-ton monstrous contraption was designed and built by English composer and sound sculptor Henry Dagg. Unfortunately, the sharpsichord suffered a few setbacks. Initially planned as an installation in the garden of the English Folk Music Society, it was decided that it was no longer safe to have it there due to the vast quantities of expensive metals used to build it. Dag maintained ownership of it and has even made some appearances in concert on his new invention, such as with Bjork. The one big downside to the sharpsichord is that the mechanical 46-string harp can only play melodies for 90 seconds before it begins to repeat itself. Here is the instrument in action playing a familiar pop song from the past.