Stratocaster marks itself as the guitar that has been around longer than most of the other guitar brands. It exceeds in versatility and demand, thanks to its durable construction and excellent performance.

Stratocaster holds the privilege of being played by a number of the most popular artists of all times. The list includes Eric Clapton, George Harrison, Jeff Beck, David Gilmour, and Jimi Hendrix.

You can remember Jimi Hendrix with his iconic righty-played-lefty style. Anyways, the track record of Strat is awe-inspiring.

The only problem with the Start guitars is their cost. Some people might be able to afford the Strat guitars by spending the paychecks of a lot of months on the instrument.

The rest of them don’t find it practical enough to spend $600 to thousands of dollars on these guitars. Regardless, Stratocaster guitars varying in the model and year can be quite elusive.

The good news is that Squier, Fender’s child company, manufactures the affordable version of these guitars and hence, grants their access to the Average Joe.

The Squier Stratocaster guitars come in a number of different models varying on the basis of fingerboard wood, pickup types, inclusion or exclusion of the tremolo bar, and so on.

On the list of Stratocaster guitar models, the Standard and Affinity series stand on the top. There have been a lot of debates on their features and specifications.

This article concerns the comparison of these two models and decides which one is the better choice for you to play.

Squier Series places the Squier Stratocaster Standard on the top rank because of multiple reasons. It follows the same pattern as the Fender American Standard Stratocaster Series.

Just like the American model, it has a two-point pivot bridge and 22 frets. 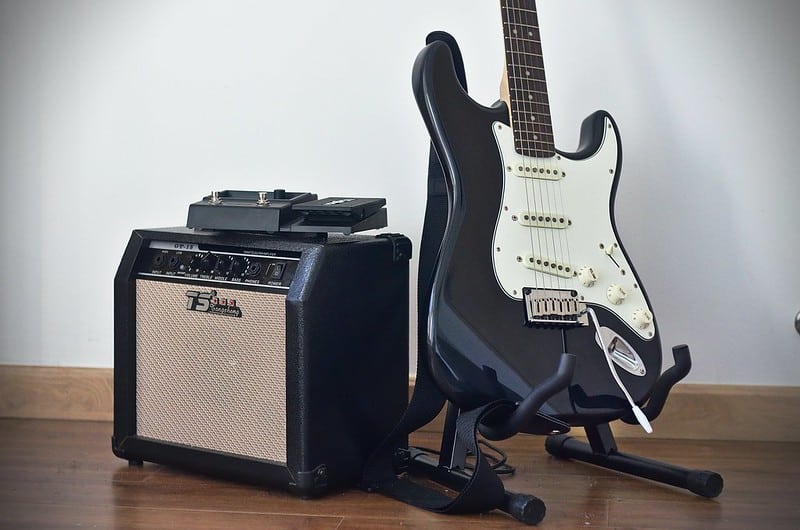 The design of the Standard stays captivating whether you are buying it for the first time or if it is your 12th purchase. It has everything that you look for in a good Stratocaster.

It comes with an iconic double-cutaway body design and a huge 60s-style headstock.

As far as the body material is concerned, it is solid Agathis/basswood. However, the color choices for it are limited. It’s either an antique burst or a candy apple red.

The Standard Start features a neck that has a bolt-on maple construction. Its shape is a modern C with a slick satin finish. The C-shape is quite comfortable for most guitarists but it is still subjective because every player has a different pair of hands.

The fretboard is maple and the number of medium jumbo frets is 22. The cool ‘skunk stripe’ at the rear of the neck is a distinctive feature that is not observed in the cheap Affinity Strats.

Obviously, there would be no awards for the Standard Strat on originality but its traditional design is pretty cool. The experience you get from playing this guitar is quite comforting and lightweight.

The hardware department of the Standard is quite exceptional as it contains the necessary components of a decent budget Strat.

The conventional neck, bridge, and middle positions hold the three pickups. A master volume controls them. However, middle and neck pickup are specifically controlled by tone control. 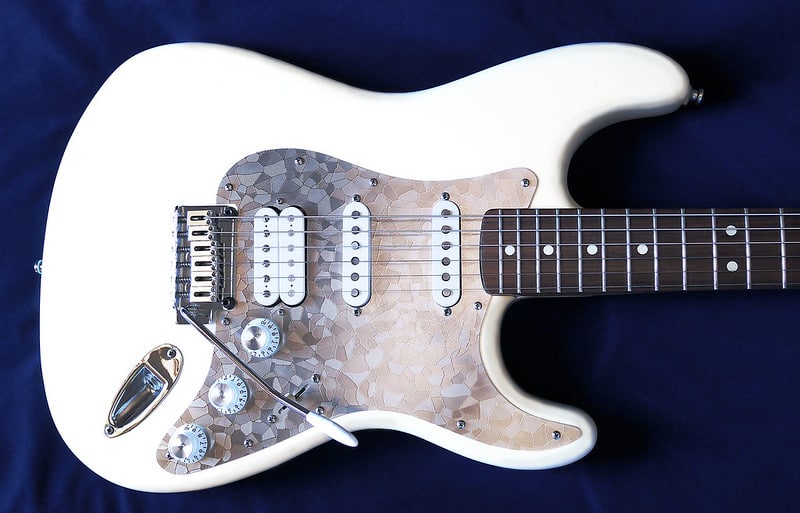 When you look at the bridge, you would be satisfied with it. The bridge is a simple stainless steel six-saddle affair. There is a whammy bar accompanying the bridge. The tuning is held well but the sealed tuners.

An important thing to remember is that you don’t need to divebomb on the Squier Stratocaster Standard.

As far as the tone department is concerned, the Standard performs pretty great here as well. There is no doubt that it cannot sound exactly like the expensive Fender model, but it does contain all the elements which you might want from a guitar’s sound.

Just like a good Start, it has bright and clear clean tones. When you add the overdrive, the heat up is pretty nice.

It shows a reliable performance in the rhythm playing but if you ask about its ideal place, that would be ideal for a lead guitarist in any band.

You are bound to get extraordinary sound results from the Standard whether you are playing rock ‘n roll, country or blues.

The playability of the Standard is pretty smooth. It is definitely an upgrade from the Affinity Starts, thanks to its complementary design tweaks.

The sound of the guitar can be as amazing as it can get if you don’t feel nice while playing it, then the tone and sound are of no use. 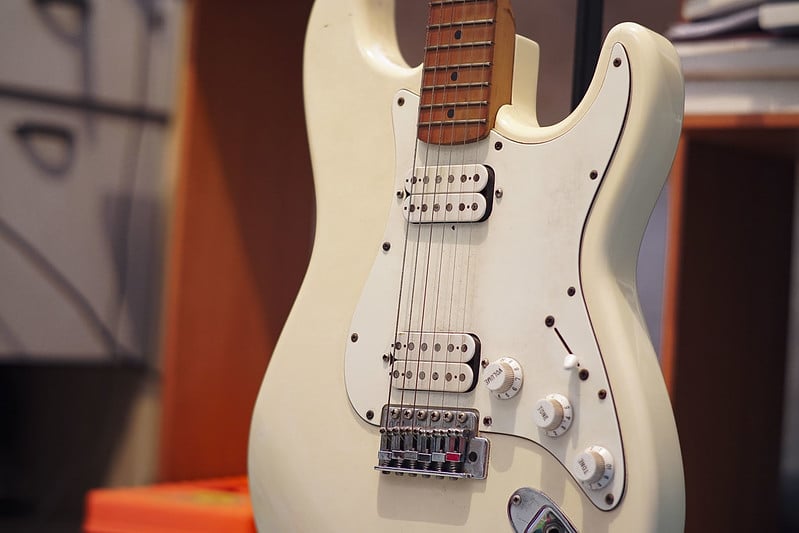 It can’t be said that it’s the nicest guitar in terms of playability but it is definitely adequate. It can do what the players need to do. Most of the players might mind the high action of the Standard.

Another thing that lacks while flying up and down the fingerboard is the catching and sharpness.

Beginners can get the most out of the Squier Stratocaster Standard if they go for its purchase. However, it’s not a suitable choice for advanced guitarists who are in need of a solid strat for the upgrade.

When the construction of the Squier Stratocaster Affinity was carried out, it was assured that this guitar would just suit the beginners

But the way its features and quality turned out, it can be appreciated by any player. It comes without a guitar case, gig bag, or any other accessories. 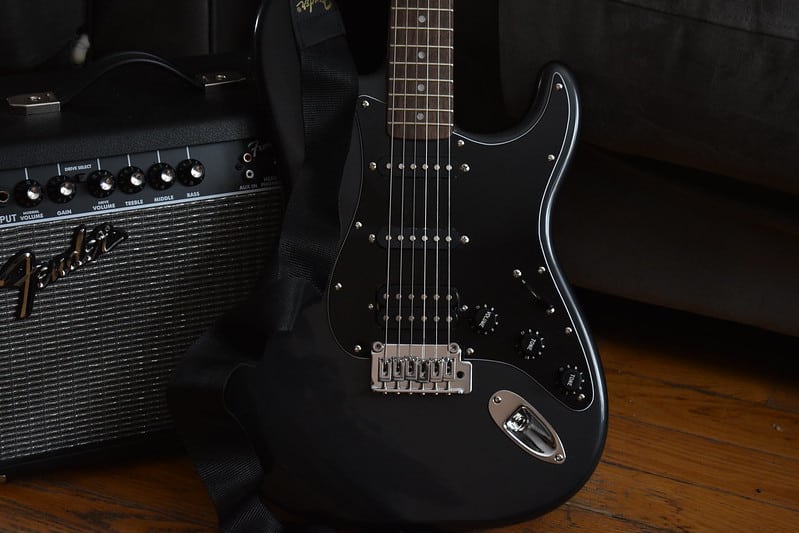 You can play the Affinity successfully for the live performances, teaching students, studio sessions, touring, and creating YouTube videos for a lot of years. Affinity is very durable and long-lasting. It pays for its price in the best way possible.

Ever since the launch of the first Squier Stratocaster Affinity, design is the most important feature that has been original all through these years.

If you ever look at its dual-cutaway body, the pickup layout, and the headstock, you will find it quite true to the original. 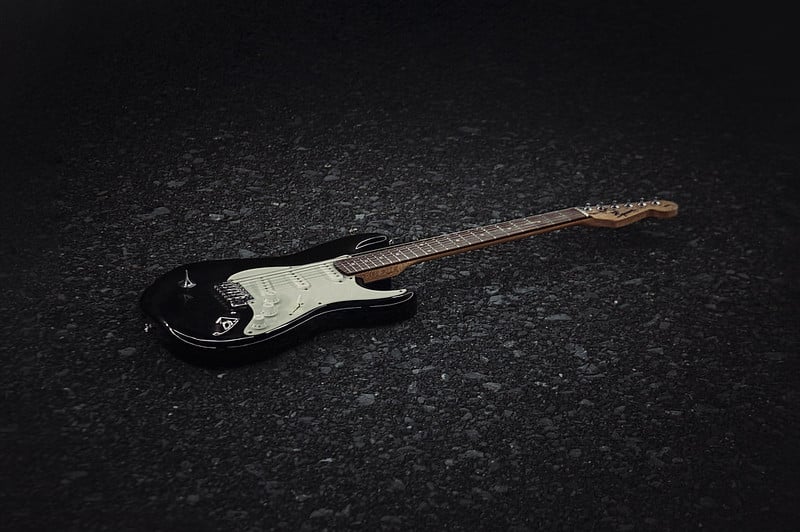 Its classic design has been synchronous with many genres of music including blues, rock, indie, R&B, pop, and metal. However, the metal genre requires replacement pickups.

The best thing about the Squier Stratocaster Affinity is the extent of its customization. You can find multiple options for the replacement parts. Whether it’s the pickups or the string tuners, you can effectively customize the Affinity Strat with them.

The five-way pickup adds to the versatility of the guitar. Players can easily jump from one genre to another with it.

No matter how many different music preferences you might have, you can’t just resist the sound of the Squier Stratocaster Affinity. It delivers the peak rock and country tones.

If you have to hold this guitar for long hours, you won’t get exhausted or bored at all. The reason is that its simple controls offer funk styles and blues.

The crisp and bright tone adds more to the suitability of this guitar for the blues, country, and funk.

Looking at the price range, it is clear that Affinity is quite affordable. There might be no replacement for this budget-friendly guitar on the market.

The construction of the Affinity Stratocaster takes place in China especially to ensure that the Fender specs are adapted as much as possible.

Comparison Between The Squier Stratocaster Standard And Affinity

The Standard and Affinity series of the Squier Stratocaster is pretty prominent as compared to the rest of their models. The reason behind their popularity is the affordability and decent quality that accompanies them.

Both of them have maple fingerboards that make them more and more like the classic Fenders.

The neck of the Affinity is pretty rough when compared with the Standard. There is just not enough polish on the back of the neck.

Talking about the frets, their edges also lack smoothness. Let alone the edges, the frets themselves don’t feel polished. 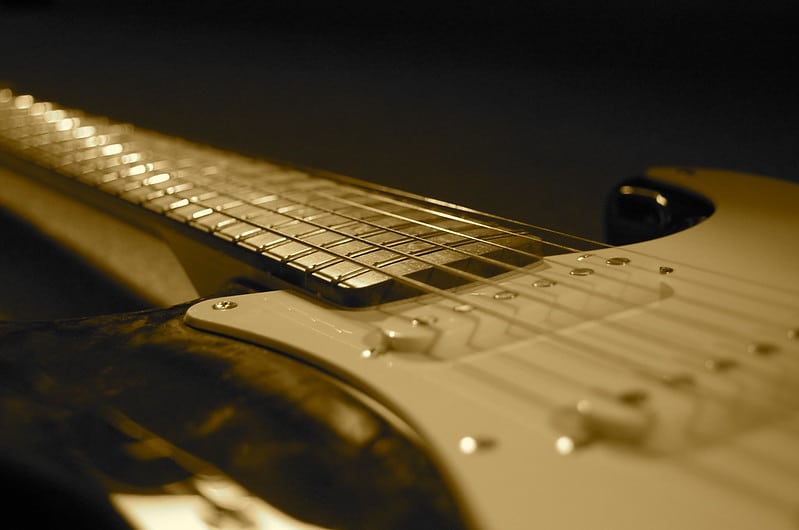 The tuners of the Affinity are definitely functional and stable but they don’t feel smooth when you turn them.

When a comparison is set with the Standard tuners, the Affinity tuners are somewhat loose. There is also some level of delicacy associated with them which makes them very easy to break.

As simple as the plastic shape of the Affinity pickguards is, they are not beveled like those of Standard.

As advantageous as the Standard guitar is, it is from the discontinued series. No matter how hard you try, you will still get your hands on a used model.

However, you can find a plethora of Affinity Strats varying on the pickup and hardware configurations.

Even if you get a Standard Start, it might be obscure. It’s better to go for the Affinity models because they are a more realistic option.

Intermediate players or beginners who are in search of an electric guitar with multiple features at the cost of under $300 can opt for the Squier Stratocaster Standard.

However, Affinity is a promising model for lovers of premium bass and exotic design.