Electric guitars are all the rage these days, thanks in part to the resurgence of classical music. Specifically, guitars with thinner fingerboards are in huge demand as they’re easier to learn and carry.

And two of the best electric guitars in the market nowadays are the PRS Silver Sky and the Fender Strat. Both these options are loved by guitarists and have unmatched durability, sound quality, and versatility- they even look similar!

However, there are some noticeable differences in the hardware, build, and performance that sets both these guitars apart. Learning about these can help you make the crucial decision of purchasing one.

Let’s compare these two guitars and discuss their differences.

Let’s start with the PRS Silver Sky. This is a relatively younger guitar (the first one came out in 2018) as compared to the Fender Strat and the newest model was released in 2021.

However, it has amassed quite a big following and is loved by most guitarists. It’s inspired by the Strat too and offers a different take on the instrument we’ve all accustomed to loving.

However, the Silver Sky is much costlier than the Strat, so you will be paying extra.

Let’s start with the materials- it shares most of the wood types with the Strat. The Silver Sky has a solid alder wood body, similar to the Strat (though the latter may have some ash wood in its place).

Both the guitars have a neck made of warm and durable maple wood and a bridge composed of steel tremolo.

The fretboards on either are usually composed of rosewood. Both have 3 single-coil pickups as well. They also share the nickel hardware type and vintage-locking tuners.

That being said, they do have different inlay designs and pick-up materials. The PRS Silver Sky has small birds crafted into the fretboard as the inlay designs while the Strat has rectangular boxes.

Likewise, the pick-up on the Silver Sky has 635JUM while the Fender Strat uses Player alnico 5.

Even their sizes are identical- the Silver Sky and Strat both are 25.5 inches big boasting a radius of around 9.5 inches. They have 22 frets that are smooth to glide across, making the guitar perfect for a comfortable playing experience.

With that said, Silver Sky does have a slightly better finishing and shiny polishing. 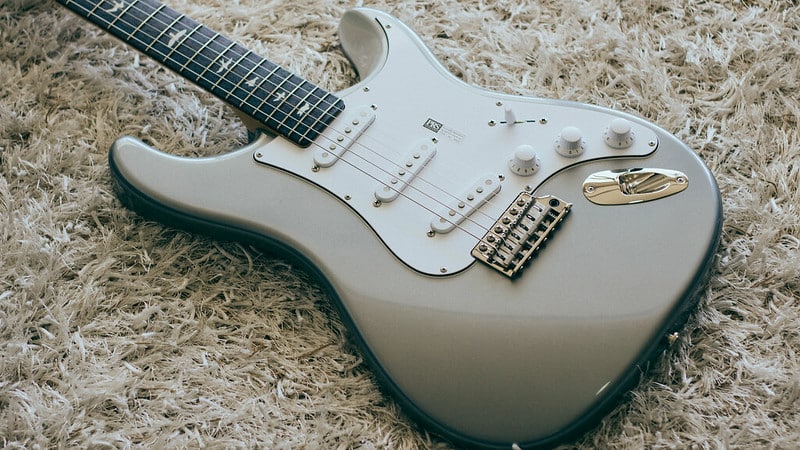 On top of that, they both carry synchronized tremolos, single-coil pickups, bolt-on maple necks, a distinct double-cutaway shape, and five-way pickup selectors.

Both the guitars have just the right amount of elasticity to enhance your playing experience. Their volume and tone controls are remarkably similar as well.

To be honest, the SE Silver Sky’s design creates a similar sensation to the Strat, so one can replace the other and you don’t need to purchase a new guitar.

Having said that, despite the body shape and pickup layout is almost identical, this guitar does not feel like a knockoff of a Strat. The reverse 3-a-side PRS headstock is unusual at first, but we’ve grown to appreciate it

If you like to do things differently, this guitar will look great on you. 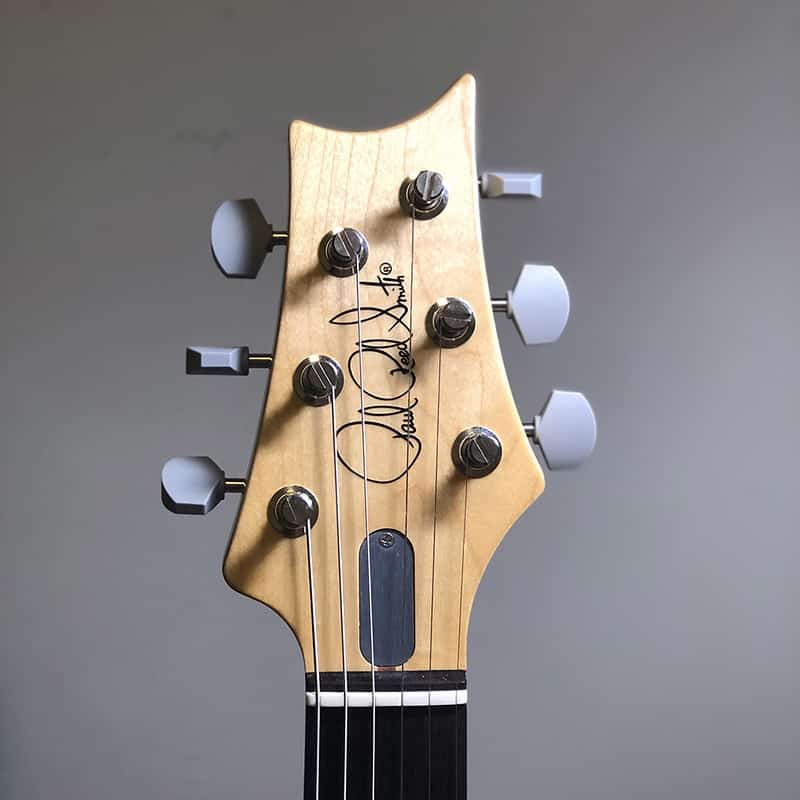 You will notice some changes in the performance and hardware when you try the Silver Sky for the first time. As we mentioned above, the main difference is the pickup control- the Silver Sky has 635JM coils arranged singularly.

This replicates the punchy but warm and cozy vibe of the Strat, despite being a little inferior in quality.

The pickups are designed to give you a smooth and balanced tone, and you won’t hear distinct differences if the volume and tone settings are adjusted in both guitars.

The Silver Sky pickups produce a less icy, picky, and sharp tone that’s aurally pleasing to the song. Whereas the middle pickups and the neck look much like the Strat, giving out a fun-friendly, thick, and clean tone with regular bass.

The guitar’s headstock shape has the trademark PRS design, but it’s inverted to give a consistent length of the player string behind each nut. This makes sticking in one tune easier.

The tuners on the fretboard are vintage-style and closed-back, having a locking design. There’s also the steel tremolo that incorporates knife-edge screws, set up in a way that the bridge only lowers when in pitch.

This increased contact between the bridge and the body enables the guitar to be noticeably louder.

The Silver Sky doesn’t produce much background humming or noises, even though the 635JMs are a dirty guitar amp.

The output is lower than Strat though, but it has nicer control and gives a more comfortable response. If you’re looking for greater output and extra power then the Strat is your obvious pick.

While the Silver Sky is easy to moderate to play for all styles, the Fender will be either easy or difficult, and it all boils down to your playing technique and style. If you love using brute force when playing, it’s best to sit the Silver Sky out.

However, if you like more touch sensitivity, then this can be your next go-to guitar.

If you’re on a budget and want a dependable guitar with guaranteed durability, then the Fender Strat is another great option.

It is undeniably the best bang for your buck, as the guitar is versatile and can be used to play all kinds of genres. 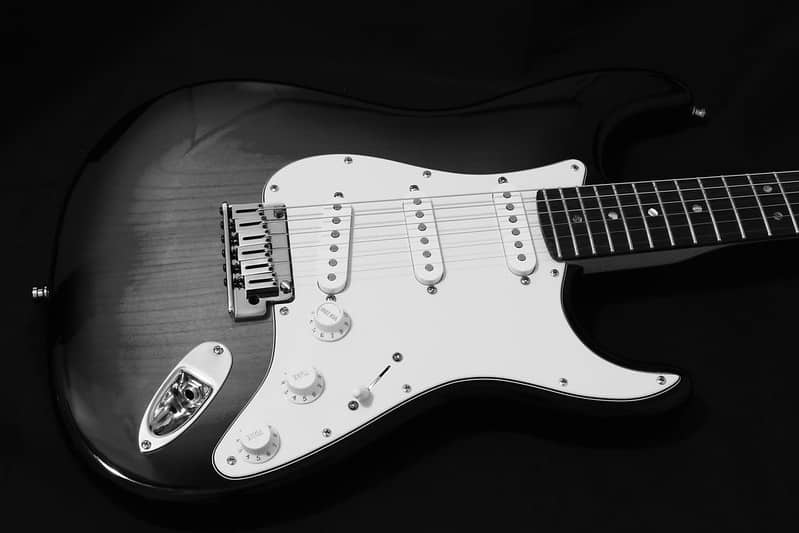 The Fender Stratocaster is one of the most replicated guitars in history, thanks to its massive appeal among guitar players. The original Strat was released in 1954 as Fender’s new top-line guitar, in both tremolo and non-tremolo models.

Because of its outstanding versatility and comfort while playing, the Strat rapidly became one of the most popular guitars on the market, being used by performers of many styles.

The Fender Strat is pretty similar to the Silver Sky in hardware, however, there are some key differences between the two. For example, with the Strat, you get a hardshell case in comparison to the gig back case that arrives with the Silver Sky.

The Strat has diecast metal tuning pages on it, which are quite durable and will likely outlast the plastic ones in the Silver Sky. The bridge on this guitar is also a two-point pivot. 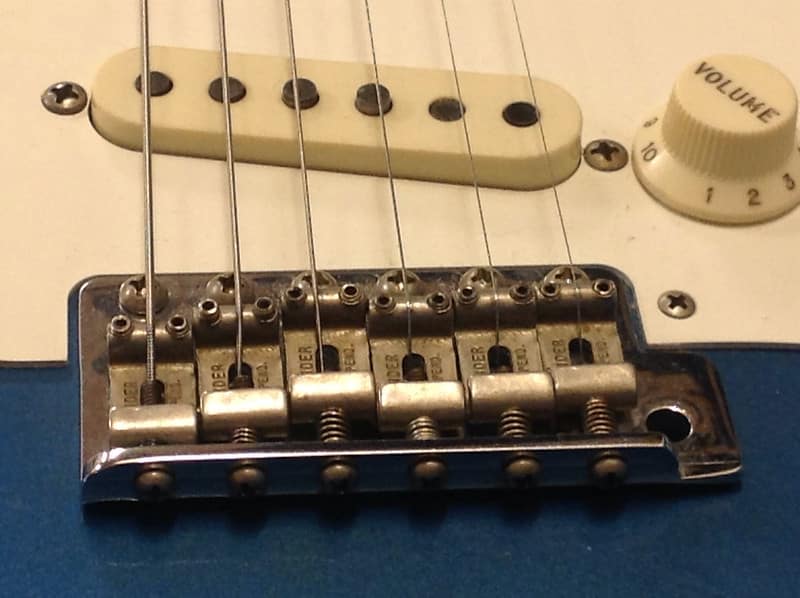 As for the design, the Strat has a more classic feel. It goes the traditional route in terms of color and finishing, and the cutaways and the carves are designed to provide your arm with the utmost comfort when playing.

If you value traditionalism over other traits, then this electric guitar is for you.

Strat also carries more powerful pickups (the Player alnico 5) instead of the 635JMs. The fingerboard radius and neck profile are flatter as well.

They are voiced a little differently than most, offering a more modern take on the Strat sound, but when paired with the right amp to be EQ’d nicely, they can take you back to old-school ’50s territory of classic and nostalgic rock.

The Player Strat has a bridge pickup that provides all of the brightness to the tone, top-end, and that punchy bite that the 635JM lacks, and while it can sound a little disorderly and overwhelming at times, it has that unmistakable ‘Strat’ tone.

All in all, the Strat is an amazing guitar with the best balance of utility and durability, something most other guitar brands and series suffer with.

This guitar uses the best materials with soft edges to be scratch-resistant. Investing in a Strat is one of the best decisions you can make when it comes to purchasing lasting instruments and equipment.

The Fender Strat is one of the most iconic instruments of all time. If you’re looking for something that’s instantly recognizable and is incredibly versatile.

However, if you want a guitar that can also tackle metal music just as well, the PRS Silver Sky would be a wise choice. The pickups are more robust, and many famous icons use it!