Fender is a classic name in the guitar industry as it has been in the business since 1946. All their guitars are well-made and are easier to play with. In addition, they have incredible playability and sound output.

They have designed an array of guitars to meet different music genre needs of the users, including bass guitars, acoustic guitars, and electric guitars. Similarly, Stratocaster and Mustang are the two most popular guitar ranges, and if you’ve to choose one, there are significant differences that you must know.

The first Fender Mustang was designed and launched in the 1960s and was designed as a part of the student series. It was first designed to help players learn how to play and handle guitars. The first Mustang guitar was designed with a blue collar and had a medium scale.

It would clock at 24 inches and had twenty-two frets as well as a dual pickup. There was a vibrato system, which helped change the pitch and sounds. The modern versions of the Mustang have an uncanny resemblance to the first model. This guitar is popular among country and rock musicians.

These guitars are popular for the short scale as compared to electric guitars, and professional musicians call them medium-scale guitars, but the neck is shorter. In particular, the current models have 22 frets and a 24-inch scale. The short and skinny neck of the guitar makes it easier to follow the strumming techniques.

In the past, Fender has also designed a Mustang with a 22.5-inch scale, but it was discontinued and impossible to find these days. The guitar’s body can directly impact the sound, tone, and playability of the guitar. The Mustangs have a compact body, which makes them easier to maneuver and won’t feel clunky.

The guitar has a C shape, which significantly impacts the sound – it makes the playability more comfortable and condensed. As far as the appearance is concerned, it has a cool design, which makes it suitable for rock musicians. The American Performer model has an alder body design, which promises a sharp attack and exceptional sustain.

The guitars are glued down, which makes them easier to work with and leads to a clear and full-bodied tone. The guitars have a satin polyurethane finish on the necks, which looks pretty amazing. Moreover, there are slider switches, so you can switch off a single coil and run it out of phase or in parallel. 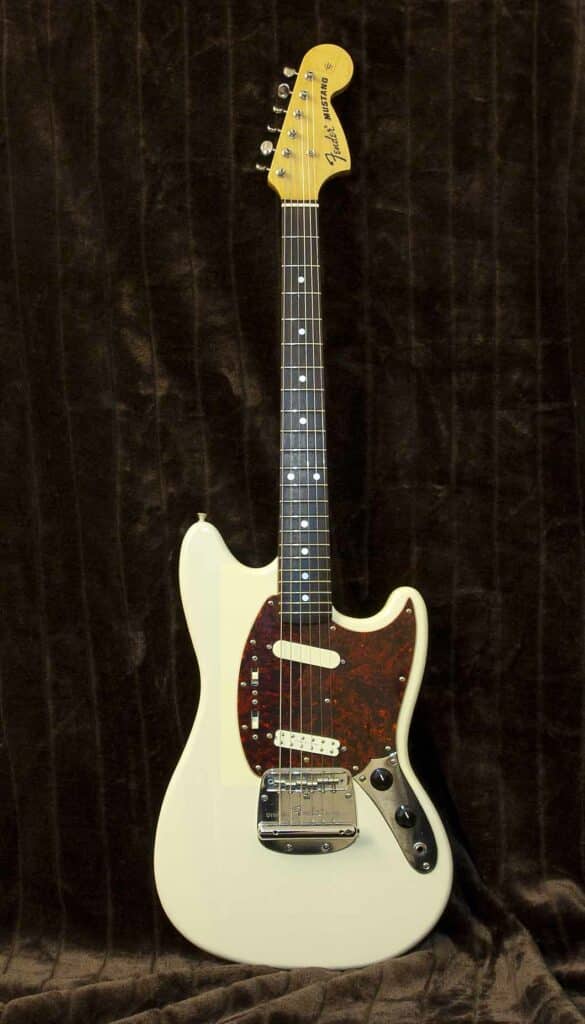 There is also a synthetic bone nut, which means they won’t break, but you have to set them multiple times to hold the tuning. Lastly, the guitars have maple fingerboards that promise articulate and precise notes with a tighter low end.

Since these guitars have a short neck and medium scale, it leads to a brighter music tone. However, the short scale means that the fret spacing is limited, but it also minimizes tension in the guitar strings.

As a result, the strings won’t be rough on the fingers, and players won’t have to stretch their hands to access different frets. The modern versions of this series are designed with two single-coil pickups that produce a bite in the sound. The pickups help produce a bright sound.

However, if you are used to using humbucker pickups, you won’t find it deep or smooth enough. All in all, the single-coil pickups help create a twangy and punchier sound. The Mustang guitar with a tremolo arm allows the users to experiment with different genres and create different sound effects.

The best thing about these guitars is that they are suitable for every guitarist, irrespective of their skill level. The professionals can use the Mustang guitar for live performances, but since it was designed for students, beginners can use it as well.

The first Stratocaster was designed and launched by Leo Fender in 1954 and became extremely popular in the US. In addition, various copies of this guitar have been designed by different guitar manufacturers. However, the original guitar was designed with an alder body, and it’s quite easy to source these days.

The guitar has a huge headstrong, and a synthetic bone has been used. Fender has used a two-point tremolo in the guitar, which is more modern as the screws are added on the bridge’s opposite sides. However, this tremolo doesn’t offer a great sustain.

For this reason, there are steel saddles in the guitar to help ensure better tuning stability and sustain. On top of everything, the guitar is designed to restrict friction, promising stable tuning.

The guitar has been designed with alder wood as the primary wood as it’s a medium-weight wood. The alder helps produce a full-bodied and clear sound. In addition, it produces extremely powerful mids while the lows are resonant and warm. However, some users have experienced fizz in the top notes.

The neck and fretboard have a maple wood construction. The fretboard has a radius of 9.5 inches, and 22 frets have been added. Fender has used nickel-silver fret wire because it conforms to the fingerboard pretty well and can resist oil stains. In addition, the fret wire tarnishes well, promising durability. 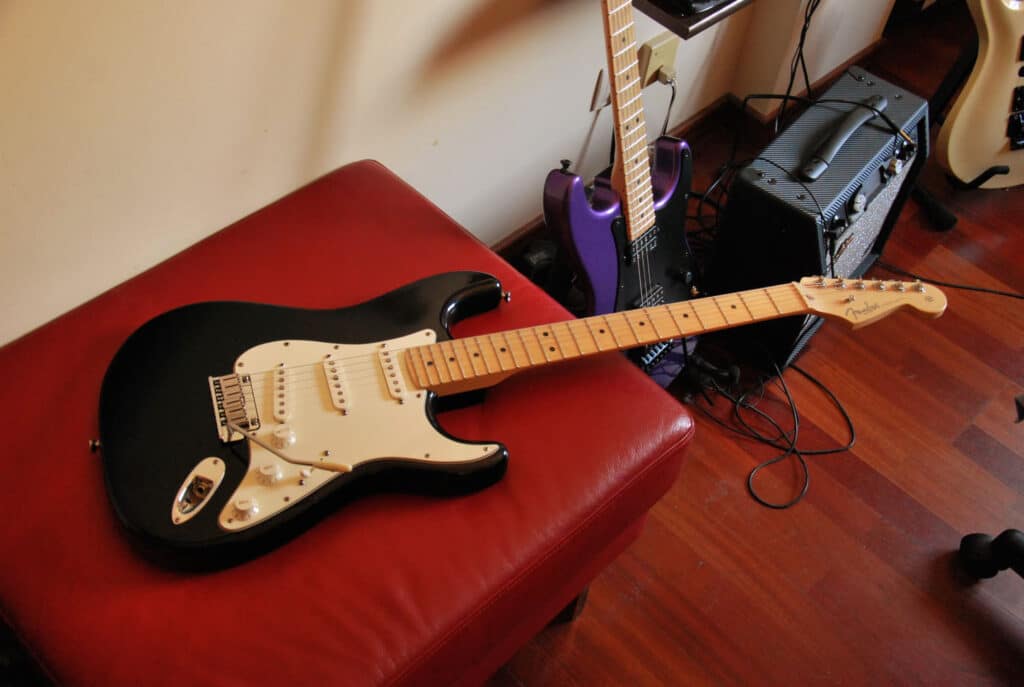 There is a bolt-on neck in the guitar as well as a dual-action truss rod, which results in the concave shape of the fingerboard, making it easier to pull the strings. There are standard dots on the guitar’s fingerboard, which adds a smooth appeal.

In addition, it has a sliding pickup selector and three knobs for easier volume control and effective two-tone control. The first control can be used to operate the neck and middle pickups, while the second control helps control the bridge pickup.

The guitar is known to produce a crispy and bright tone as well as warm and thick sound, given the use of alder in construction. In addition, the alder wood results in an exceptional sustain level. The contoured shape of the guitar makes it easier, more comfortable, and more efficient to play the upper frets.

The maple fretboard of the guitar helps produce articulate, clean, and precise notes with exceptional bite. This is because maple is a hard and dense tonewood that helps produce snappy and bright tones. There are 22 frets in the guitar, which result in a thicker and warmer sound as well.

In addition, these frets are extremely easy to play with. It is integrated with single-coil pickup, which promises better volume control and higher frequency response. Moreover, it helps keep external interference at bay. 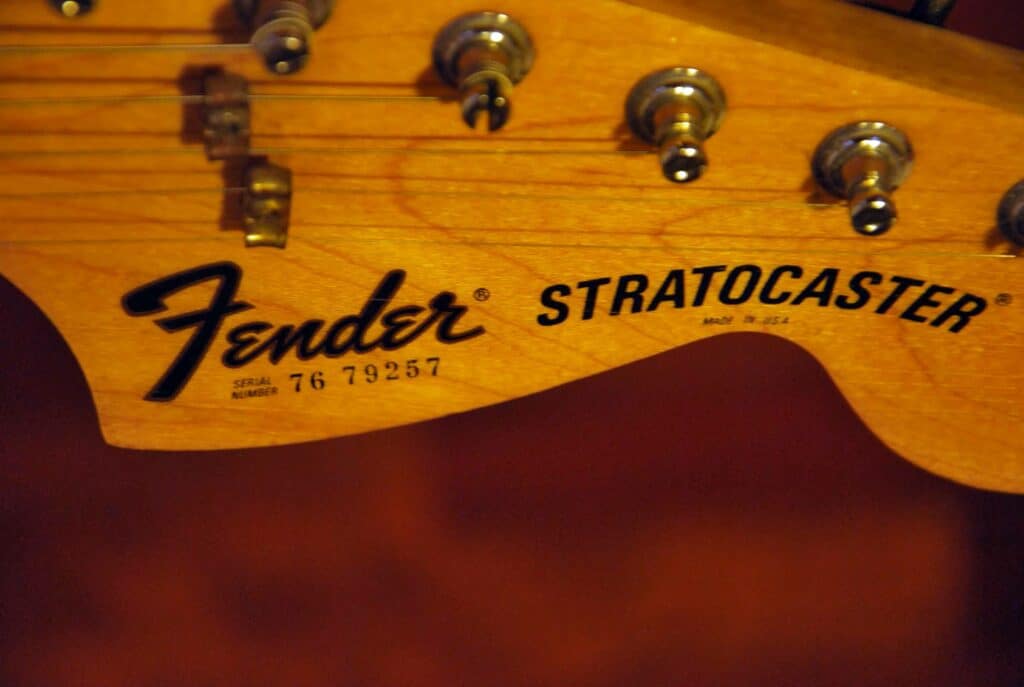 The guitar is designed with five alnico magnets, which results in a balanced lower end on the mid-range – the sound output can be punchy as well as subtle, depending on your playability. All in all, it promises a unique sound output and has a playable neck, making it suitable for beginners.

Both Mustang and Stratocaster have exceptional build and sound quality. However, Mustang is recommended for people who need a compact guitar (people with small hands should use this guitar as it’s easier to access the frets).