This article crosses many borders in a search for compositions that have been specifically written for that iconic popular music instrument, the electric guitar. The instrument itself came into existence in the early 1930’s and quickly gained a place in the Big Bands of the time.

The advantage of the electric guitar was that its amplification allowed this gentle almost timid instrument to be heard above a large ensemble. As you would expect this cross-section of works rests heavily on pieces from the 20th Century but shows the possibilities of the instrument in a diverse number of ways.

We begin with one of the better-known works for solo electric guitar by the American composer, Steve Reich. Reich is considered by many people to be one of the most exciting composers to align himself broadly with the Minimalist style of composition. His work has a strong rhythmic drive and his output demonstrates an impressive diversity of works; each uniquely engaging. The ‘counterpoint’ series of works began in 1982 with “Vermont Counterpoint”, the “Electric Counterpoint” coming in 1987 with Pat Metheny its dedicatee.

This compelling piece is in three sections marked with the following tempi: fast-slow-fast. In keeping with the homogeneity that often hallmarks the minimalist sound, Reich scores the work for a solo electric guitar or amplified acoustic guitar, together with seven additional electric guitars and two electric bass guitars. For the solo performer without the availability of live players, Reich provides a taped recording of the extra parts. This is a formula he had successfully employed in the earlier New York Counterpoint for clarinet.

Steve Mackey is one of the most significant contributors to the growing repertoire of electric guitar music. He is not only a gifted composer but also an astonishing performer; featuring as the soloist in this recording of Physical Property. This piece comes from a trilogy of pieces titled “Fables with Three Tasks”, that Mackey has chosen to score for electric guitar plus string quartet.

The narrative is of vital importance to each of the pieces as is the exploration of life from Mackey’s own perspective that embraces the importance of freedom. Mackey describes Physical Property as like a headlong plunge down a ski piste with the vague hope of amazing bystanders and himself at the end of the run.

Another work that followed the trilogy is titled “Deal” (1996).

This challenging piece is scored for a chamber ensemble with a generous percussion section. It feels much more aligned to the model of a Concerto than the previous trilogy partly because the guitar soloist improvises throughout the work with the ensemble adding material suggestions. Mackey comments that the idea was to try to capture the essence of how electric guitarists, in particular, tend to perform: in a free, improvised manner. This he considers offers each individual performer’s the opportunity to play in their own unique style. The result is an engaging tapestry of musical images that flow effortlessly from one to another.

This piece, first presented in 2009 at the Lincoln Centre, USA, is intended for as many electric guitar players as the venue will allow. Chatham originally intended this piece to be performed by 200 electric guitarists and 10-16 electric bassists. In this recording, the numbers reach 400 producing a mesmerising, if rather lengthy work that seems to gently evolve like a distant giant nebula coming into focus in a telescope.

Crimson Grail is in three sections and is littered with subtleties that challenge the ear to hear during the performance. Interestingly, the physical arrangement of the performers is key to the piece as they form a u-shaped grouping around the audience to produce an effect similar to the quadrophonic sound you might hear in a cinema. Crimson Grail has been met with great popularity and if you are interested in becoming part of one of Chatham’s grand performances here is his website.

4. Concerto Suite for Electric Guitar and Orchestra by Yngwie Malmsteen (1998)

Perhaps unlike other attempts to bridge the perceived gap between the world of popular music and contemporary classical art music, this work aims to be a genuine concerto in the classical sense of the word. The piece is divided into twelve sections that vary in length but each taking a traditional classical tempo or style indication like, Sarabande, Toccata or Fugue. The soloist does not arrive on stage at the start of the work but instead makes an entrance following the opening section titled “Icarus Dream Fanfare”.

What comes in the next section is a virtuosic display from the solo electric guitarist whilst the orchestra falls very much into the role of accompanists. As the piece progresses Malmsteen takes us through a range of pastiches that at times feel rather contrived but do at least hold to their origins. The entire work is over an hour in duration and certainly has its merits in terms of melodic writing and the opportunity for the soloist to fly about the fretboard, it appears to offer little in terms of the development of the ideas.

John Lord has become synonymous with the progressive rock pieces both as an independent artist and with the legendary rock group Deep Purple. Lord is a virtuoso keyboard player whose specialism is the Hammond Organ. In the piece above, Lord dips into the world of classical orchestral music to achieve a synthesis between heavy rock and contemporary classical. What Lord creates is a kind of 20th Century Concerto Grosso but instead of a Baroque chamber ensemble, a symphony orchestra; and replacing more traditional instruments, electric guitar, drums, electric bass and drums as the concertino.

This is probably as far as the term concerto can be applied to the piece that combines some fabulous blues and rock riffs with the full support of the symphony orchestra. Even though the electric guitar is not the only soloist here, it features as a major player throughout the fifty-minute work. If nothing else it is a wonderful example of the spirit of the 60’s and the immense imagination and skill of both Lord and Blackmore. 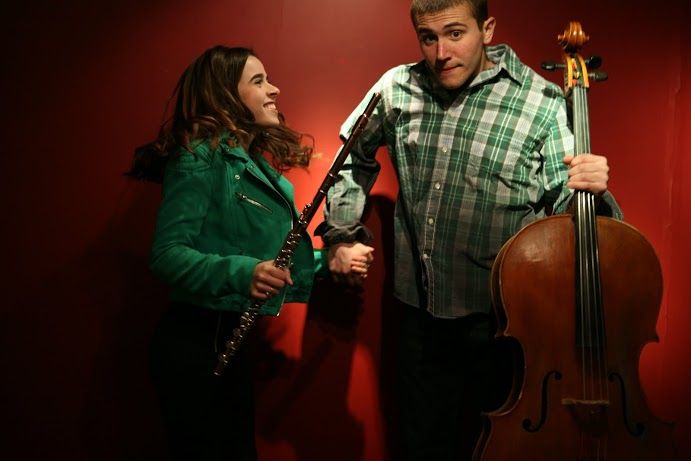 Classical Music And Beat Box, Out Of The Box

Andrea Caccese - Aug 29, 2014
If you are a purist when it comes to music, you might miss out on many truly amazing things. Music is, after all, about...

QUIZ: Can You Identify These 10 Famous Composers From Their Photos?