If you have just bought your electric guitar, you need an amplifier for it. There are a lot of guitar amps, varying in the brand, size, shape, and cost. Just like the rest of the instruments and equipment, there are different brands available for the amps as well.

The analysis of a wide range of electric guitars reveals that Marshall and Orange are one of the most sought-after and popular amp manufacturer brands on the market.

It is obvious to encounter confusion while making a choice between one of them. The best suggestion is to pick the one that can meet your needs and requirements in an efficient yet economic manner.

Before jumping on to the comparison between Marshall and Orange, it is better to go through their features and attributes.

The Main Differences Between Orange vs Marshall

Orange is a British company that has been manufacturing amps since 1968. Their amplifiers are of premium quality. Who doesn’t love the British tone? Well, Orange amps pride themselves in encapsulating the British tone.

The first Orange amp was manufactured by Cliff Cooper who was working on them in a London shop basement. Over the span of 50 years, Orange amps have encountered exponential growth.

There is a proper household name and color associated with Orange.

When you look at history, you see that the greatest musicians of all times opted for Orange instead of Vox or Marshall. Why wouldn’t they? The sound of Orange is as incredible as it can get.

There is no compromise made on the quality of the Orange amps. If you are looking for reliable components to get your hands on, you can’t go wrong with the Orange.

It is free of any silly switches and insane features. Everything is just balanced and adequate. 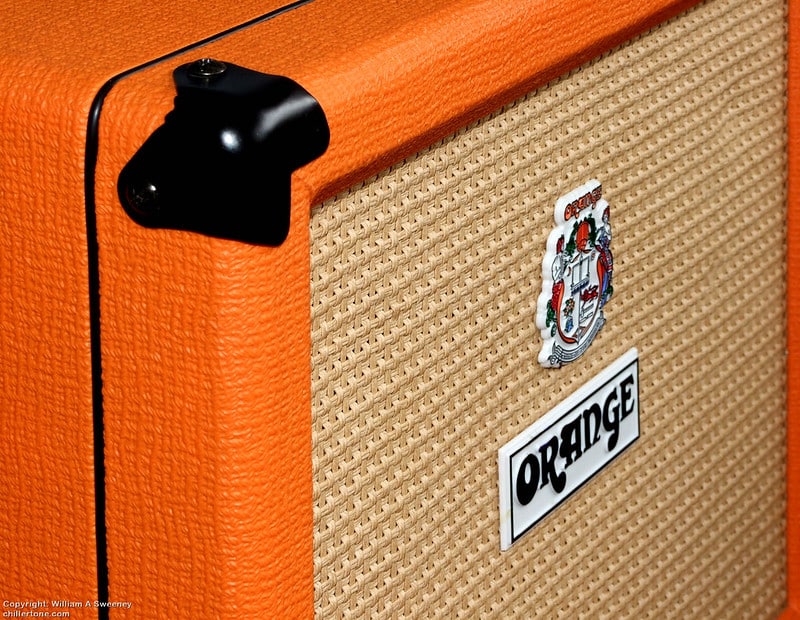 It doesn’t matter what musical genre you use the Orange amps for, they are bound to put the rest of the amps to shame.

Although it is right about the Orange amps doing sludgy stuff you can trust them with the metal and modern rock. As far as the blue sounds and British indie are concerned, Orange holds the power to simply nail them.

The compatibility of the Orange amps for different sorts of speakers and musical instruments makes them a more favorable option for you to choose.

Another great thing about Orange is that it also deals with the manufacturing of speakers, so you can get both speaker and amp from Orange and they can perfectly complement each other.

Ever since the launch of Orange company, a large number of universally acknowledged guitarists have chosen Orange.

Most of the tones you love and repeatedly listen to today are a result of the mutual work of the founder Cliff Copper and Jimmy Paige, Fleetwood Mac, Stevie Wonder, and Oasis.

Recently, Slipknot’s Jim Root and Brent Hinds of Mastodon got their two signature terror amps from the Orange. Both of them proved to be massive hits.

The playability of the Orange amps also extends to the guitar and bass ranges of modern musicians including Beyonce, Iron Maiden, Deftones, Catfish, The Bottlemen, and Foals.

The best thing about the Orange is that its quality amps are not too expensive to get. There is a large number of amps from Orange that have several uses in the musical industry.

On the large list of options, you get the portable Terror amp heads, classy Tremlord, and everyone’s favorite affordable Crush series. However, the top of the tonal tree accommodates the Rockerverb, thanks to the AD series bass amp.

The versatility of the Orange amps is worth mentioning again and again. If you are used to playing heavy metal but occasionally play an indie tune, you can use either The Crush, The Rocker, or Rockerverb. 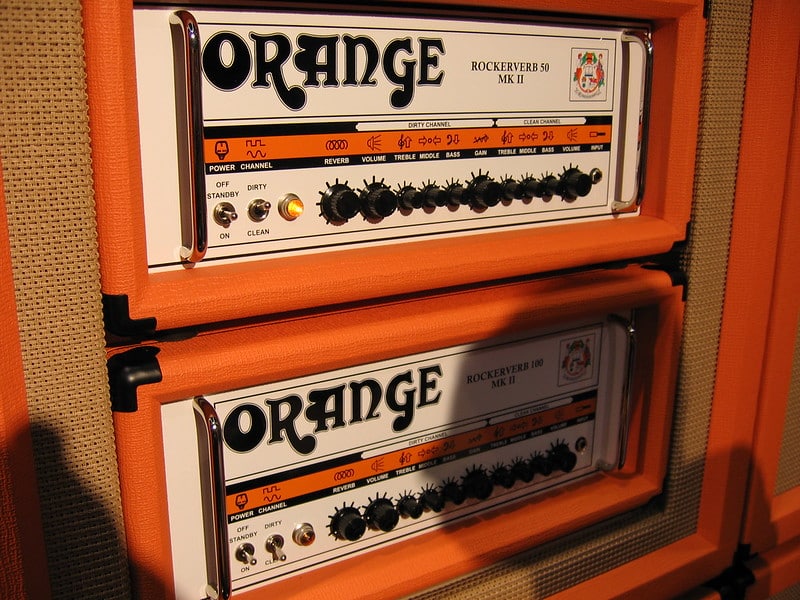 You will get your desired aggressive tones. No matter what music you intend to play, Orange amps can work quite well for you.

The world of amplifiers holds the name of the Marshall brand in a very high place. The reason behind it is very clear. The powerful sound produced by Marshall is perfect for every brand regardless of where they are playing.

The best thing about Marshall is that they keep launching new products with better modifications and improvements. Marshall is ideal for high power and low power modes.

Although the old tone production is quite common with Marshall, there also exists flexibility for modern playing. It’s not just the performing that gets the most of Marshall, you can also use these amps for the recording.

Back in the day, most British rock bands had a classic mid-range sound. Marshall focuses on giving you the same sound while adding more organic touch to it. The vibrant and raw sound is also maintained side by.

The best use of the Marshall amp would be for the strong tones of the rhythm guitar. However, solos can also get a smooth sound from it.

Unfortunately, you shouldn’t expect to get a floor-shaking bass from Marshall. But you can add more crunch to the sound by cranking up the master level. The intensity of the sound is also balanced very well.

The aforementioned detail on the characteristics makes it clear that metal is not the favorite choice of the Marshall amp. But rock bands that are playing classic 60s and 70s rock music can find this amp ideal.

Comparison Between Orange And Marshall

The popularity of Marshall is way more than that of Orange. Everyone has probably heard of Marshall amps somewhere. Its fame is because of the extraordinary features that it flaunts. It also wins in the market reach as well.

The number of bands that use Marshall amps exceeds the ones using Orange amps. However, that’s not the standard for preferring one amp brand over another.

The major reason behind the wide popularity of Marshall is that it was launched before Orange. It had a lot more time to set its name and fan base as compared to Orange.

Talking about the Orange, it rose to its peak in the early to mid-1970s. As soon as it got successful, it outshined Marshall in many aspects. Not only did it compete with Marshall well, but it also surpassed it as a major amplifier brand. 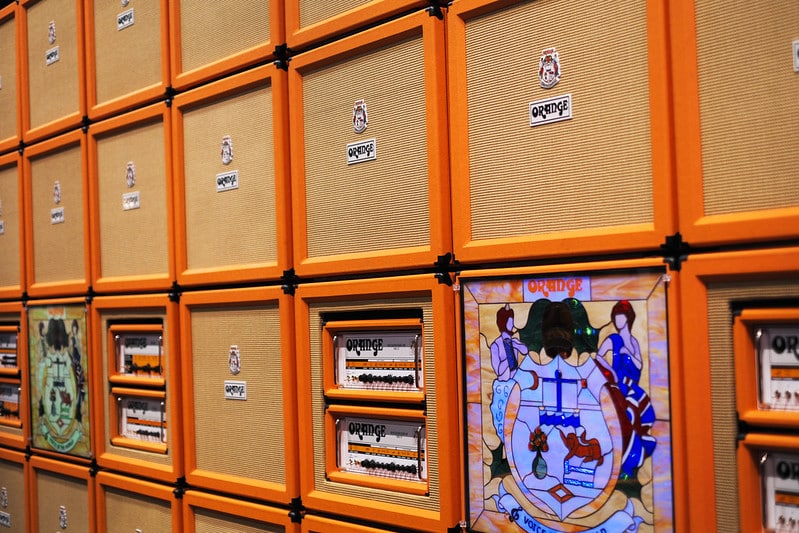 In the early years of the 2000s, the cult classic status was achieved by the Tiny Terror which is an Orange amp.

However, it was possible mainly because of the endorsement from metal, stoner, alt, and indie musicians. Still, in the musical industry, Marshall has got a more consistent mainstay.

Marshall wins over Orange in having a wider range of amplifiers. You can get any amp depending on your requirements. The range of the Orange brand is limited comparatively.

The signature sound of Marshall has its own crunch and a sizzling distortion. On the other hand, there is tons of gain offered by Orange. However, it’s only Orange who undergoes the proper maintenance of definition and exceptional clarity.

There is more compression to the clean tones of the Marshall amp. The distortion of the Marshall valve amps takes place at lower volumes as compared to that of the Orange amps.

The latter have fuller tones while the Marshall amps feature sharper tones.

When using gain, Marshall amps give a crunchy and gritty vibe to the tone. When the gain is set high, you can observe the fuzziness in the tone of Orange amps.

When comparing the design and aesthetic of Marshall and Orange, the difference is quite clear because as the name indicates Orange is bright Orange and Marshall is black. With the black logo and tolex color, Orange amps get a retro look.

As far as the Marshall amps are concerned, it preserves their sleek design of black amps. The latter are studded with gold knobs and white faceplates.

The iconic and yet more advanced look of Marshall has been around for decades and it is still applauded. 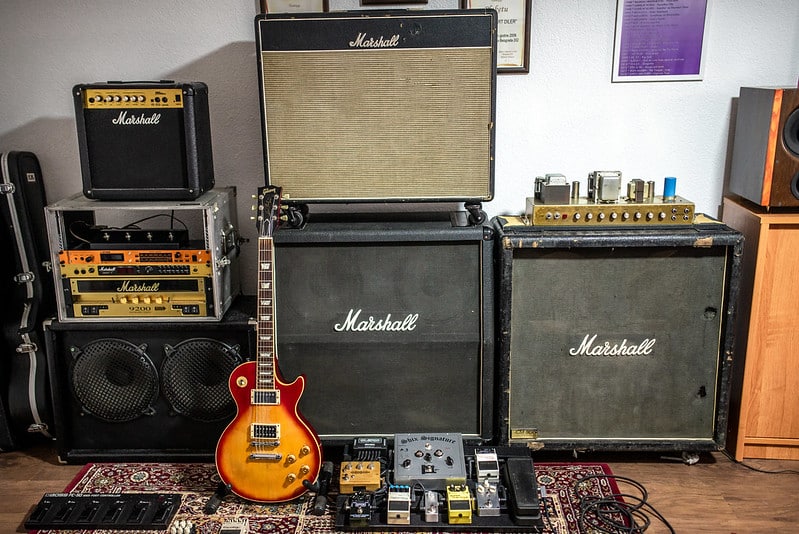 When Orange and Marshall amps are compared for similar voltage, it is clear that Orange amps are easily affordable. Marshall amps can be quite expensive for some.

Both the amps give you comparable sound with the difference of less wattage from Marshall than Orange.

Musicians often wonder which amp would suit them the best as per the particular music genre. The capability of playing a wide range of music styles is for both Orange and Marshall.

The suitability of Marshall amps lies for the rock players whereas modern heavy metal guitarists with a preference for a scooped sound should opt for Orange amps. 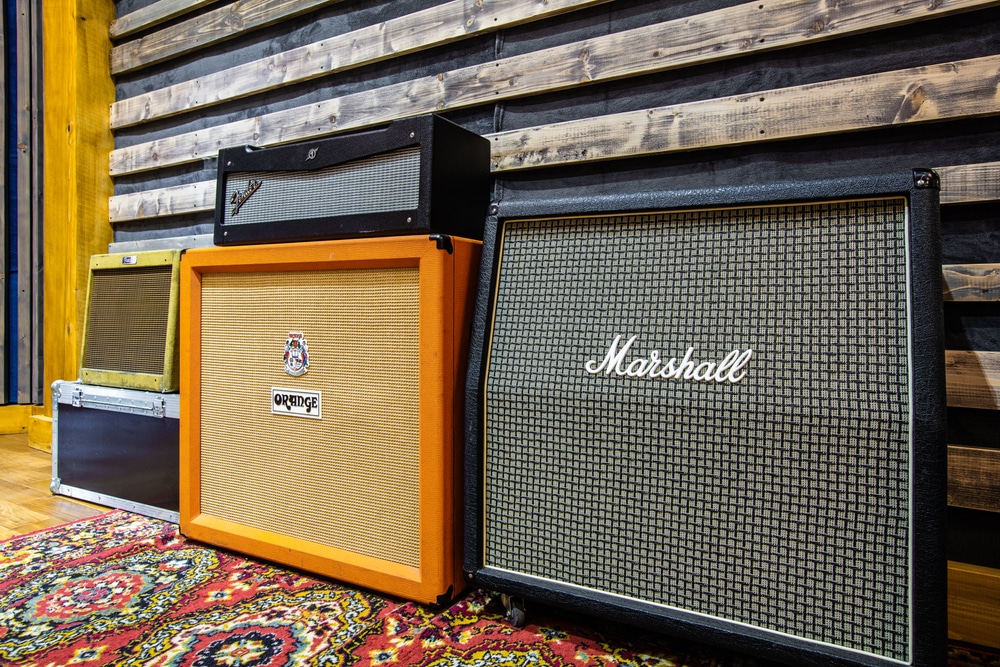 It can’t be said that one amp brand is better than the other because of multiple factors.

Players who are after the best amp tones can opt for Orange amps because the latter are free of unnecessary features and non reliable construction.

No matter what tone you want to dial in, Orange makes it possible for you. On the other hand, rock players who are looking for a classic tone can get the most out of Marshall amplifiers.

Before settling for any one of these, do a double-check and see if the chosen amp is fulfilling your needs.