There are many levels on which a comparison of these musical giants could be made. One might be an analysis of their pianistic ability, another perhaps their contribution to the development of the piano. What I will aim to achieve here is a summary of the achievements of each composer, leaving the final judgement to you.

Ludwig van Beethoven (1770-1827), was a composer who bridged the transition from the Classical world to the Romantic. His feet were firmly in the traditions and expectations of Mozart, Haydn and to an extent Bach, but his mind as we can hear in his work, was far away in the musical future.

Beethoven composed extensively for the piano, which could probably be considered to be his instrument of choice. He was a gifted and innovative pianist who often performed his own compositions even though deafness increasingly hampered his ability to do so as he got older.

In total, Beethoven composes thirty-two Sonatas for Piano (Op.2 – Op.111) and five extraordinary Piano Concertos; the last of which received the title “The Emperor Concerto”. These works alone illustrate the immense capacity Beethoven had as a composer and highlight the expectations he had of the piano, directly contributing to its development into the instrument we know today. Beethoven took the concept of sonata form from his predecessors and developed the structure almost to breaking point in some of his later sonatas for piano.

Beethoven was also a great symphonic composer. He wrote nine complete symphonies in his brief time on earth, each a masterpiece in its own right. Such was Beethoven’s creativity and invention, that he pushed the Classical symphonic form into a completely uncharted territory and paved the way for other symphonic composers like Bruckner, Brahms and the operatic composer Wagner. Beethoven is often considered to be the first ‘tone-poet’ as his music is so powerful and evocative he allowed the composers who followed him to compose in the way they did because of his work.

In addition to his piano and symphonic work, Beethoven singlehandedly made the String Quartet his very own vehicle for rich, emotional expression. There are seventeen completed string quartets that include the Op. 133 titled “Grosse Fuge” that was originally intended as a finale to Op.130. Each of the quartets provides us with a window into Beethoven’s meticulous compositional practices accompanied by the dominant sense of struggle and redemption that saturates his output.

Frederic François Chopin (1810-1849), has been described by many as the ‘poet of the piano’. Similar to Beethoven, Chopin’s main instrument was the piano and like Beethoven, he too pushed the boundaries of pianistic technique and composition. What is undeniable is that Chopin used his legendary facility as a pianist to create works of inordinate beauty and sensitivity that have been unparalleled by other composers that followed.

Unlike Beethoven, Chopin adored the company of others and people were drawn to the somewhat enigmatic figure that he must have cast. Surprisingly, Chopin did not enjoy the experience of performing in public even though his abilities were exceptional. His persistent ill health did not help his anxiety about performance and he preferred to make his living teaching nobility, giving only very few concerts in the last two decades of his life.

Chopin may well be thought of a lyrical poet although he had very little interest in literature. His association with the French author George Sand is widely acknowledged as important in Chopin’s life as she was a huge support and inspiration to him even though at their first meeting Chopin questioned whether or not she was actually a woman at all. Chopin’s compositions stemmed from his desire to express whatever was inside him and far from being the withering melancholic that many suggest, he was a formidably gifted composer who made a substantial contribution to the world of Romantic music.

Chopin centred almost his entire output on works for the piano or ones that brought the piano into the main spotlight. He is perhaps best known for his Nocturnes, Polonaises and Mazurkas. Frequently in these works, we hear echoes and influences of Chopin’s Polish origins. Sideways glances at the music of the peasantry with all its vital rhythmic drive and earthiness. As an exile from his home country, it is perhaps easy to understand how the need to include what was still a fundamental part of his make-up, into his compositions.

Equally famous compositions by Chopin include his terrifying Études, of which there are twenty-seven, three Piano Sonatas and two Piano Concertos. Many critics have passed harsh comments on these longer musical compositions claiming that Chopin had not really the skill to sustain lengthier pieces. My feeling is that you will need to make up your own mind, but take care not to so easily dismiss Chopin purely as a miniaturist. He wrote no symphonies, operas or indeed any songs or string quartets but what he left us with is a superb collection of pieces for piano that still remain amongst the most performed pieces today.

Both Beethoven and Chopin led short, difficult lives in which they each significantly furthered the development of the piano as an instrument as well as providing us with a repertoire that is unique. They each crafted the cornerstone of contemporary piano technique.

Both composers were able to pour themselves into the music they left us. Chopin and Beethoven were equally gifted tunesmiths and structural innovators. There are very few classical tunes that we find ourselves familiar with that are not composed by either of these two great composers.

Beethoven was able to extend his work into ever more elaborate and sustained compositions whilst Chopin excelled in smaller but correspondingly inventive, intimate pieces. As pianists, they probably could not have been more different. Beethoven was supposed to have actually broken the strings on his piano as his deafness increased whilst Chopin was described as a delicate, technician.

As far as we can ascertain from Chopin’s correspondence, he admired Beethoven’s Appassionata Sonata (Op.57), but otherwise expressed no particular like or dislike about his music. Beethoven, as far as we know, knew nothing of Chopin’s work and given how infrequently Chopin performed, never could have heard him play a piece. What is certain is that without these composers the world of piano, symphonic and chamber music would be much the poorer. 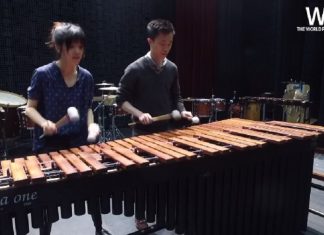 CMUSE - Aug 18, 2017
The World Percussion Group has the great players and they always find a way to remind us where they are the elite of percussion...

All About That Bass Gets Big Band Cover From Postmodern Jukebox