To many people, the mere mention of the word Ragtime prompts the name, Scott Joplin. This is because he is perhaps the most celebrated composer, and performer, of the style of music that came to be known as Ragtime. One of his most played and adored pieces, ‘The Entertainer’, composed in 1902 for piano solo, demonstrates so many of the characteristics of this style of music that we will explore in this article.

Ragtime music is essentially an early form of jazz music that dominated the American Jazz scene from the late 19th to the early 20th century. What can perhaps be considered to be part of the enduring appeal of Ragtime is the fact that it is a combination of music from both African and Western cultures. A characteristic of African American music was a rhythmic feature called ‘syncopation’. This means music that does not play on the beat of any given bar, but instead ‘off the beat’ creating a sense of lilt, swing, and forward motion. When this music was fused with the more traditional and somewhat straight-laced marching band music of the Western cultural tradition, the music of Ragtime was formed.

This fusion of cultures came most commonly in the form of piano pieces that would characteristically have the steady march-like pattern of accompanying chords in the left-hand of the piano, whilst the right-hand played the syncopated melody. The left-hand style I refer to is also known as ‘stride’ piano technique designed by pianists at the turn of the century to give the impression of a piano re-creating the sound of a larger jazz ensemble.

Stride playing involves the bass note of the chord sounding in the lowest part of the piano, on the main beats of the bar, whilst the chords are on the weaker beats towards the middle register of the instrument. It is not an easy technique to master but this is one of the key elements of Ragtime piano music.

The melodies, especially those of Scott Joplin, were extremely appealing and catchy. This was in part due to the syncopated rhythm, but also the careful construction of the tune combining a compelling mix of movement by leap and step. 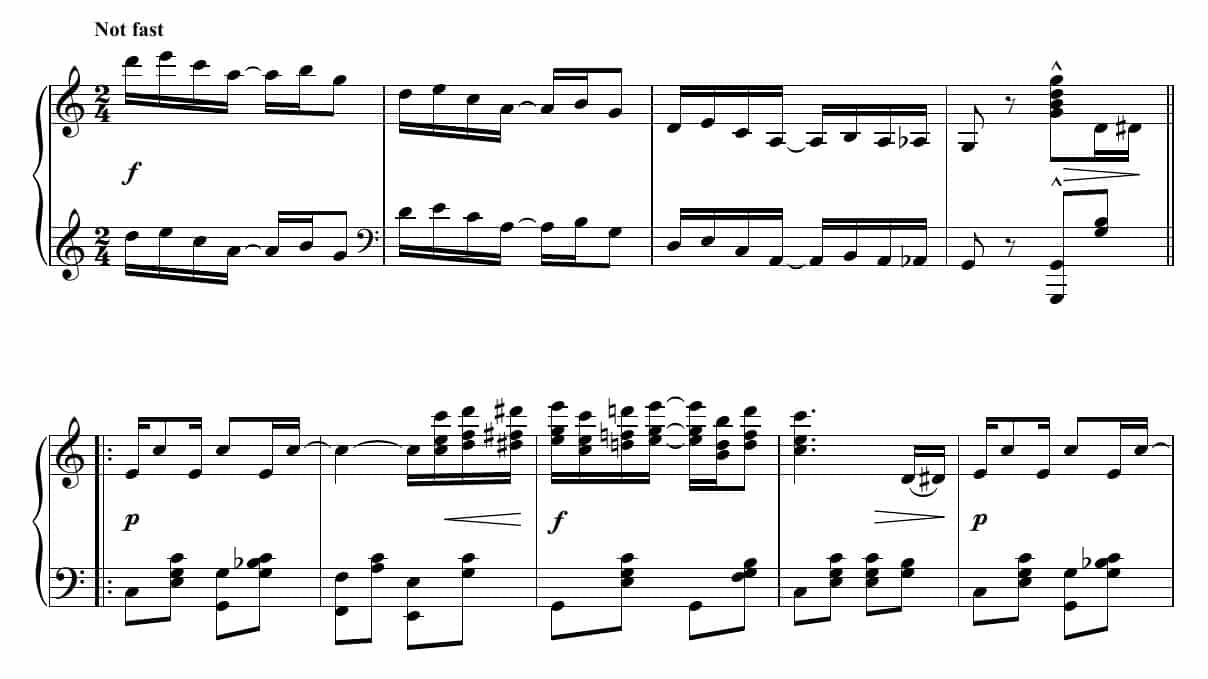 In the extract above it is easier to understand the characteristics of Ragtime I mentioned in the earlier paragraphs. This is the opening of the famous composition ‘The Entertainer’.

Here you can see the ‘stride’ in the left-hand and the melody in the right-hand. Notice that the right-hand, in this case, is also playing in harmony. Joplin also cleverly splits the melody into two different registers of the piano with the first bar-and-a-half marked ‘piano’ (soft), then the higher register marked with a ‘crescendo’ (getting louder), to ‘forte’ (strong).

Regular ‘phrasing is another feature of many ragtime pieces, each adhering to a four-plus four-bar phrase length. This regularity makes the music easy to connect with as it provides a gently predictable pattern that has appealed for many centuries. The harmony also underpins this phrasing and even though many Ragtime melodies are quite chromatic in parts, the harmony is decidedly tonic/dominant based. This gives a very solid harmonic feel to the piece without stepping very far out of familiar tonal boundaries.

That said, Scott Joplin, Jelly Roll Morton, Joseph Lamb, or James Scott to highlight the key Ragtime composers, were not in any way confined by the tonal system, they exploited and employed it in colorful and imaginative ways. It was the keen ear that these amongst other composers of the time possessed, that created a compelling style of music that we still enjoy over a century after its invention. ‘Elite Syncopations’ (Joplin; 1902), is a fine example of not only intelligent, innovative creation of harmony and melody in a rag, but also a clear indicator that Joplin was not as many white commentators of the time claimed, just a peddler of nice tunes.

In this rag, Joplin structures the piece in this way: Introduction – A A B B A C C D D. This is not a regular, predictable form Joplin is using but an extended one that allows him to show his own powers of creation and to demonstrate that the Rag is not a limited musical form. Harmonically he begins in F major, modulates (changes key), to Bb major for the ‘C’ section, and remains there without returning to the tonic key. Joplin’s choices could have been very different and a perfectly functional rag could have been composed in a more straight forward manner, but this is not Joplin’s motivation. Joplin, perhaps more than other Ragtime composers, was eager to show his understanding of Western Art music in his use of harmony, chromaticism, and more complex structures.

Joseph Lamb was a contemporary of Joplin’s and the story goes that Lamb met Joplin in 1907 when he came to Joplin’s publishers (John Stark & Son), to buy a copy of his music. When you hear or play the music of Lamb, it is easy to see why Joplin was impressed by this young composer. Lamb took the ideas that Joplin had made his own and developed and extended them. A characteristic of Lamb’s work is the use of harmonic ‘sequence’ that he utilized to develop his compositions. It is also possible to hear that Lamb side-stepped the confines of regular four-bar phrasing to more complex lengths that gave a unique feel to his music.

Ragtime music offers a fascinating and absorbing combination of Western Classical Music with early Jazz. The underlying 2/4 of 4/4 march-time serves as the rhythmic momentum for each Rag and is overlaid with a glittering array of inspired melodies that fuse smooth chromaticism with sleek syncopation. Structurally modeled on earlier Classical music Ragtime created new music out of older, established forms and in the process gave us a unique genre of popular music. Even though Ragtime is not perhaps heard as commonly as it was a century ago, the music enjoyed a resurgence of interest following the 1973 film ‘The Sting’ that featured adaptions of several Joplin’s Rags.

D Grant Smith - Sep 1, 2015
This infographic takes us back to 1965 and cycles the songs that have trended #1 for the hits of summer. It's interesting to note...

How to Play Classical Piano