This article will take a quick tour through a variety of some of the most well-known ragtime tunes for piano. Ragtime music first emerged around the turn of the 20th century with its foremost exponent being the pianist and composer Scott Joplin.

Before embarking on a closer look at the music it is perhaps useful to be aware that Ragtime as a musical form is a perfect blending of black jazz music with white marching band music.

The racial division was terrifyingly evident at that time in social history and the music was viewed in a similar separatist manner. The result, however, is a hugely popular musical form that combines a regular march-like two-beat rhythm with the subtle syncopation of early jazz.

This is doubtless the most famous piece of Ragtime music ever composed. It was written around 1902 and gained steadily in popularity. The piece enjoyed a resurrection in the 1970’s when it was brilliantly used in the film titled “The Sting”.

This is not a simple piece to play as like most Rags, uses a stride, a left-hand piano technique the effectively adds both bass line and chords to the melody. The light-hearted nature of the music and compelling tune has made this rag amongst the favourite of all Joplin’s oeuvre. Joplin himself made his living as a piano teacher and composer, dying tragically at the age of forty-eight.

Even though the Entertainer has become the winner of best-known Rag, it was The Maple Leaf Rag that assured Joplin his reputation. This was probably the first Rag Joplin published and one that has enjoyed many years in the spotlight. There is no introduction to the piece like The Entertainer, but an upbeat from the bass and we are plunged into the melody. It’s a wonderful display of how Joplin played, I would suggest, and makes full use of the colours and range of the piano. It has been referred to an archetypal Rag meaning that it set the tone and structure for most Rags that followed.

In this Rag, I feel the presence of the Marching Bands more clearly than in other works by Joplin. This is particularly because of the bass line which acts as a counter-melody to the fast flowing tune above. Harmonically it uses some of the subtle chromatic tricks of the Maple Leaf Rag that add a gentle spice to the otherwise traditional chordal patterns. Structurally, the Rag falls into the familiar AA-BB-A-CC-DD with the exception of the final section that presents new material. It is also in the slightly more approachable key of F major as opposed to the Maple Leaf Rag in Ab major.

Born in 1887 in Montclair, New Jersey, Lamb became one of the most noteworthy Rag composers of his time. This Rag was composed in 1916 and is considered by many to be amongst his finest. Lamb was well aware of the music of Joplin and even though his earlier Rags pay close homage to Joplin’s works, these later Rags demonstrate a new approach to Rag composition and a unique voice. Rhythmically, Lamb becomes increasingly experimental and also explores a greater variation in phrasing patterns in the melody. He favoured sequential patterns for development and certainly shows himself to be an equal to Joplin both as pianist and composer.

Like many pianists of his time, Jelly Roll Morton made his living early in his career as a pianist in a brothel. His music offers us a refreshingly adventurous voice in the world of both Jazz and Ragtime music. Morton has many tricks up his compositional sleeve and Tiger Rag is no exception, although he is not the only composer who claimed to have written the piece. He is harmonically and melodically daring in this Rag, breaking many of the expectations of the form. Listen for the forearm smashes later in the Rag. This Rag is also amongst one of the most arranged and performed pieces of its genre, and of Jelly Roll’s substantial output.

Born in South Dakota George Botsford was a key performer and composer of Ragtime music. This Rag was published in 1908 and highlights Botsford able grasp of the Rag style. Botsford received a formal musical education and this appears to give his music a slightly less flexible and relaxed feel. Botsford composed music both in the Ragtime style and other musical genres but this Rag is considered to be his best-loved. It was made even more famous when it was used as the theme music for the UK television snooker series called “Pot Black”.

This is one of the most fascinating of the Rags in this selection and accompanied by a performance from the actual composer. The Rag was composed in 1899 and seems to have a huge variety of styles within it. The familiar Rag rhythms litter the piece but there are also aspects of the later boogie-woogie style alongside traits of Jelly Roll Morton. More colourful and complex harmonies blend with crunched melody lines. There is more than a sprinkling of humour in the performance and the Rag itself. Altogether a more experimental and diverse piece of music from the time of Rag.

Often considered by scholars to one of the ‘big three’ Ragtime composers Scott composed this rather smart Rag around 1914. Given the historical significance of that date, the Rag itself is lively, optimistic and not untypical of something that Joplin himself may have composed. Scott developed a notable career working as an accompanist for the silent movies, also earning a living teaching piano. He was kindly known by people as the “little professor” due to his studious disposition and frequent absorption in thoughts of his own. 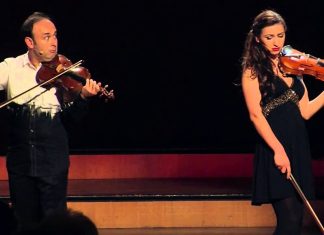 Angelica Frey - Apr 6, 2015
Violinist, composer, conductor and also actor Aleksey Igudesman might have an answer for that, and that answer bears the title "Chilekli Devekushu". In a virtuoso-like...

5 Pieces Of Relaxing Violin Music To Help You Unwind From...