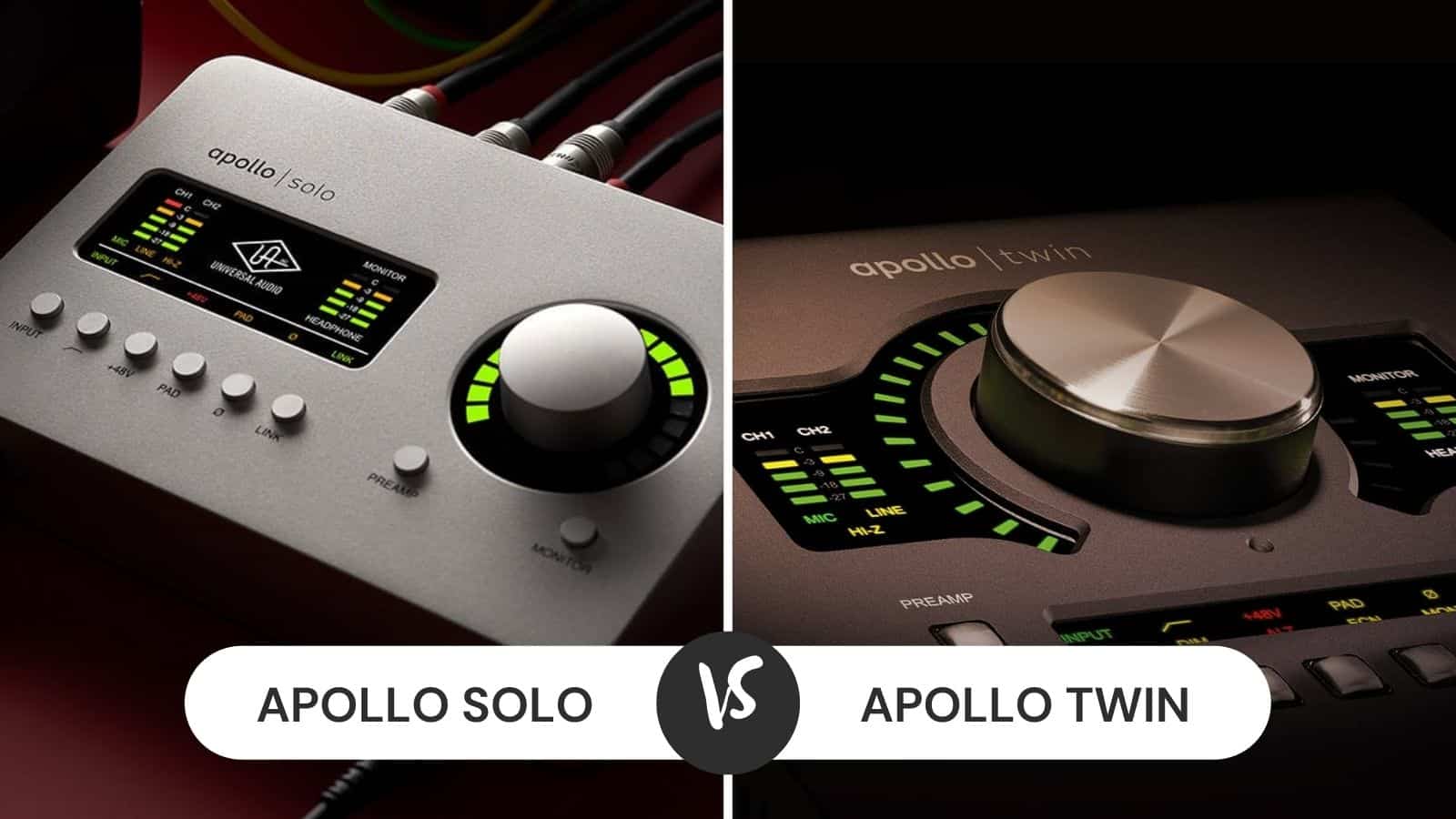 An audio interface is important for converting the instrument and microphone signals into a specialized format that the software recognizes.

As a result, it creates audio with high-end clarity, and Universal Audio has some of the best audio interfaces available for musicians.

They have multiple high-end audio interfaces available, but Apollo Solo and Apollo Twin are the two most promising choices, and to choose one from these two, it’s important to understand their features!

Comparing the Apollo Solo vs Twin

This is one of the top-notch audio interfaces available with straightforward and effective features. This is because it has only one knob for controlling multiple features and has a rugged and compact metal chassis, which makes it extremely durable.

The interface has a Thunderbolt 3 port, and the front side has a digital meter. In addition, it comes with a Hi-Z input for connecting the guitar as well as a headphone jack to connect the headphones. 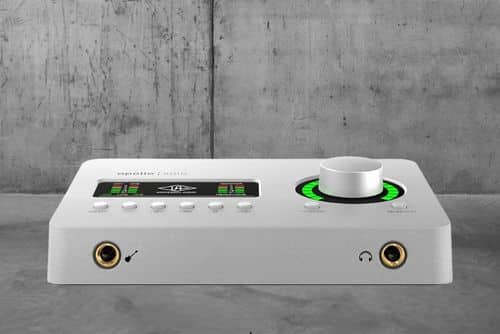 The jacks are designed on the front side, which makes it convenient to connect the headphones and guitar. There are two universal inputs on the back of the audio interface as well as two stereo monitor outputs.

As far as the Thunderbolt 3 port is concerned, it can be used to connect the computer, but you will need to purchase the cable on your own. Overall, there are three total inputs on this audio interface, but only two of them can be used for recording.

The audio interface is integrated with D/A and A/D signal converters, so you can create clean and clear music, irrespective of which guitar you use.

There is a UAD unison technology on the input channels, which can channel the performance characteristics of the hardware.

Moreover, there is a SHARC computer processor for operating the plugins. It has a unique hardware and software integration, which helps reconfigure the impedance of the interface.

In addition, the unison technology can help add structure to music gains to deliver the classic transformer and tube sound. In simpler words, you will be able to filter the audio, and the mic will interact with the input ports to deliver better performance.

The best thing about Apollo Solo is that you can extend the functionality by adding multiple Thunderbolt 3 cables. Moreover, you can connect an audio satellite to enhance the processing power.

Apollo Solo is integrated with a wide range of high-end plugins, so you don’t have to install anything extra on your computer.

However, to utilize the 90 plugins offered by the company, you must increase the processing power even if you want to record two input tracks at once with amp simulations.

There are some vintage emulation plugins available, but the guitar and bass amp plugins don’t have many customization features, but the range is pretty impressive.

When you register the interface, you will get your hands on a free vibrato/chorus pedal. As far as the paid plugins are concerned, you can use them for free with the 14-days free trial.

The audio interface has powerful and sleek control software as well as a DAW, so you can control the interface. The software allows the users to set up the headphone mix, choose the plugins, and connect the headphone and guitar.

The software is extremely user-friendly, and you can create a great workflow for monitoring the signal path and recording. Also, the software connects well with the plugins, so you can have multiple mixing options.

Apollo Solo promises high-quality sound. This is because the inputs are dynamic, clear, and clean. When connected with the preamps, the recording will be extremely convenient.

On the other hand, the outputs are powerful, and you can keep the knob at 5% to enjoy the best music quality and volume. In addition, the headphone amp can power the high-end mixing headphones.

Secondly, you don’t need to worry about the latency because it’s nearly undetectable when you monitor the interface, even while running the complex guitar plugins.

In simpler words, the interface is extremely responsive, but there is no power button – you will have to turn off the software to turn off your audio interface.

The audio interface has multiple colors, ranging from silver to black or grey. Just like Apollo Solo, there is a Thunderbolt connection, but it doesn’t have a cable either. 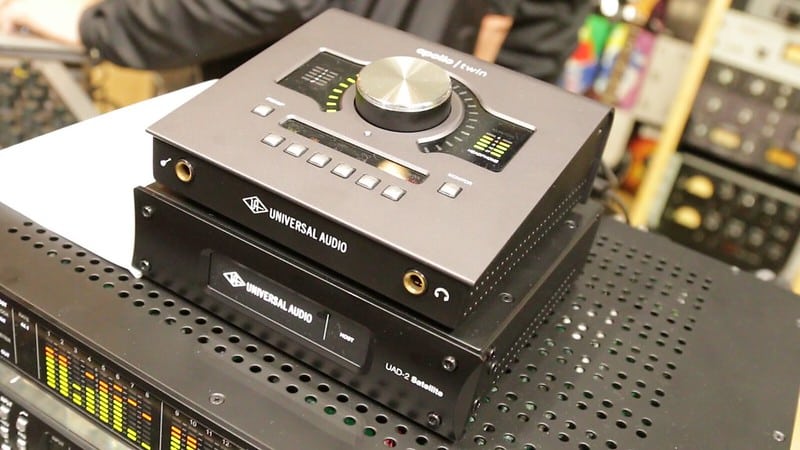 The back panel is designed with two line/mic inputs as well as four ¼-inches outputs – two are for monitors and two are for lines.

There is also an optical jack designed for S/PDIF or ADAT, which means you can connect over eight inputs. The front side of the interface has a Hi-Z guitar input designed on the left side, and a headphone jack is designed on the right.

Apollo Twin has a bigger LED display as compared to the Solo version, which means you can keep an eye on the interface functions.

With the preamp control, you will be able to switch between phase invert, input, phantom power, high-pass filter, two-channel link, and pad.

On the other hand, you can use the monitor control to choose between function, mute, mono, Alt monitor selection, and talkback. The dim button helps reduce the output, and the function button is connected to the routing options.

The audio interface is designed with a talkback mic, so you can record the notes and music ideas. In addition, you can use the solo, duo, and quad-core features to extend the function according to your music needs.

There is an AD/DA converter added to the interface for extending the dynamic range without creating any distortion. In addition, the DSP has been increased, with which the preamps have become more powerful.

In addition, there is a classic plugin bundle available that has multiple plugin recreations of the outboard amps and gear. All in all, there are fourteen plugins available for compression, guitar amps, EQ, and reverb.

The audio interface has a compact interface, which means it can be used while traveling, and the metal casing will enhance the durability standards.

It has cutting-edge recording and audio features. For instance, there is an i/o configuration available for enhancing flexibility, and you can expand the features by adding eight analog inputs with the help of ADAT.

In addition, you can connect the hardware plugins directly into the paths, which promises zero latency in audio recording.

If you like to extend the functionality of your audio interfaces, it’s best to choose Apollo Twin because it has two DSP processors, so you can connect more plugins without worrying about overburdening the system.

On the other hand, if you don’t want to extend the plugins, Apollo Solo would be fine.