The unmistakable opening to Beethoven’s Fifth Symphony has become so embedded in popular culture that it is hard to imagine it any other way. The development of sound recording played a huge role in spreading music more widely, and it’s not surprising that the orchestras of the early 20th century didn’t take long to record Beethoven’s masterpiece for posterity.

The first recording of the symphony was made in Berlin in 1910 by Friedrich Kark and his Odeon Orchestra. Considering the rudimentary character of sound equipment available at the time, with a group of musicians having to gather closely around a large cone that picked up the music, the sound quality stands up well.

As we noted, Beethoven’s Fifth had rather inauspicious beginnings. It was performed at a benefit concert for the composer on 22 December 1808, alongside a number of other works.

Kark played an important role at a number of early recording firms in Germany from 1906 to 1930.

Arthur Nikisch’s 1913 recording of Beethoven’s Fifth with the Berlin Philharmonic was generally regarded as the first full recording of the symphony. There are significant differences between the two, with Kark maintaining a high tempo throughout the first movement compared to Nikisch. The 1913 Berlin Philharmonic recording was recently brought out in a CD collection marking 100 years of recording by the world-famous orchestra in 2013. 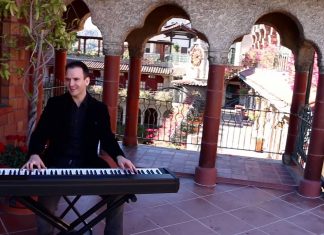 Jordan Smith - Jun 18, 2015
The pianist Jonathan May has recorded this ragtime piano rendition of the Game of Thrones theme, and it’s a nice change from the original....

WHICH IS THE WORLDS FIRST LP MUSICAL RECORDING?