The hype behind the Paul Reed Smith guitars is real. Anyone who wants to purchase a guitar definitely comes across PRS. Paul Reed Smith founded the company PRS Guitars in 1985. The current location of this company is in Stevensville, Maryland.

The guitars from PRS are simply amazing, and the best thing about them is that there are a lot of different models available out there that can pave the path for you to have a seamless experience playing the guitar.

No matter what genre of music or whatever style you want to play, you can definitely trust PRS with it.

PRS wins the charts in all aspects, including sound, design, looks, and playability. The grand quality of these guitars is another factor that has made them popular all around the world.

The abundance of these models can also get you confused a bit as to which guitar would suit your needs, and you should be choosing the one among all these different models of electric guitars that you can get from them, SE and S2, that are compared very often.

The study of their distinctive features and characteristics can throw more light on these models.

The SE guitars of PRS match the classic PRS guitars in terms of aesthetics and distinguished finish. Compared with the rest of the models, SE guitars have shown the most resemblance with the core version of PRS.

There are 8 different pickup combinations in this model, which make SE a ‘do-it-all’ instrument.

The sound of the SE guitar is as incredible and versatile as it can get. The slack caused by the maple top wood is compensated by the clear sound produced by the pickups.

Whether you are looking for hard rock or jazz, the SE guitar can provide you both with clarity and strength.

The splittable coil instruments often encounter the problem of getting too muddy. However, that’s not the case with the SE model. The tonal variety is held with so much ease that there are no complications.

Most of the guitars usually produce a wide range of tones, but none of those tones sounds great. However, the SE is different from those guitars.

It ensures that every possibility of the tone is a real joy to play. It’s amazing how much an instrument can get you.

The double-cutaway shape of the SE is inspired by the old stars. Not only does this shape add to the aesthetics of the guitar, but it also makes the sound better.

Besides, all the frets are easily accessible to you. There exists a large variety in the color pattern options of the SE. Two kinds of woods are involved in the making of the guitar body of the SE.

Maple makes up the top of the guitar, while Mahogany is used for the back. However, you might observe a little flavor loss from the maple top. Regardless, it has remarkable flatness in sound and transparency in the tone. 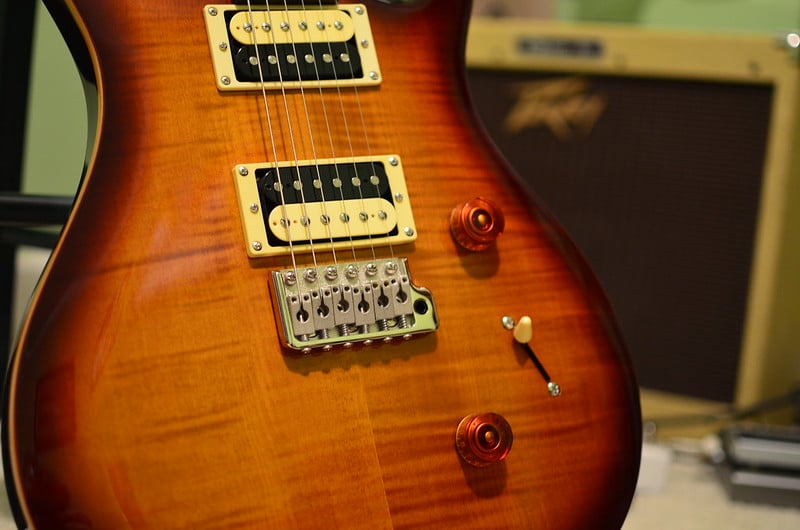 The strength of the SE is another appealing feature that attracts most of the players. For the neck of the guitar, maple wood is used, whose sturdiness prevents the guitar from getting any scratches or dents.

The perfect setting of the neck into the body ensures the proper alignment. As far as the fretboard of the SE is concerned, it is made of Rosewood.

PRS has done a great job at designing the bridge of the SE. The Tremolo/Vibrato twist to the bridge is nice. With the amazing string stability, the bridge can give you great action. In addition, expect a whole lot of fun while playing with the sound bending.

The nut is an important asset to the guitar. Therefore, designers have made sure that the nut of the guitar is manufactured with the material that can lower the string buzz as much as possible and promotes great string harmony. 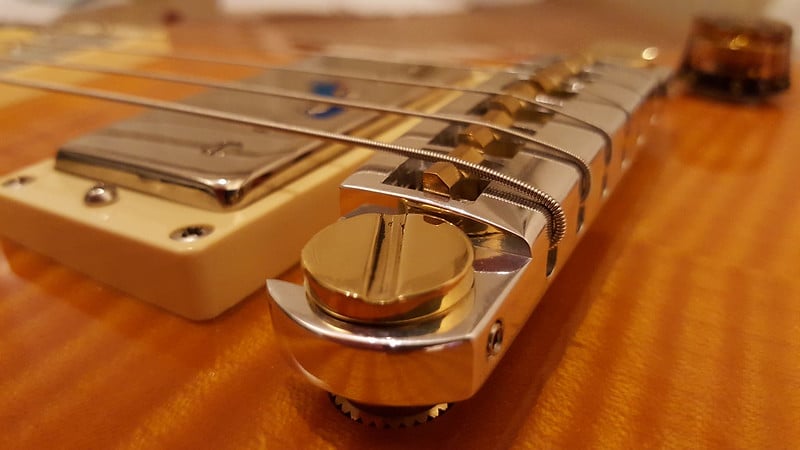 The stability and the appearance of the tuning machine of the SE guitar are incredible. Even when you have been playing guitar for days or keeping it unused for weeks, the tuning is bound to stay intact. It is also great for handling string bending.

The ‘wide-thin’ neck is an excellent feature of the SE that gives it prominence over the other PRS models on the list. The playing experience you get from the SE is fluid and fast.

The long scale length is a primary factor that eases the playability with the SE. As far as the tremolo is concerned, it is designed pretty great. It has an easy configuration.

Beware of the tuning issues created by the tremolo because they can be frustrating for the players. However, most light players who do not use tremolo much are not likely to encounter tuning problems.

No matter what model PRS is, all of their guitars are a joy to play. One cannot get enough of the flat neck, mirror-finish frets, and low neck offered by this superb guitar.

The construction of the new SE line is not Korean anymore. It’s Indonesian. The looks and feel of the SE are amazing. With a beautifully carved body and a stunning finish, the SE is easily playable.

The best thing about the SE is that it has a dual humbucker configuration. The location of one humbucker is at the neck while the other one lies at the bridge.

The combination of these two humbuckers allows the players to have great sound and more power. 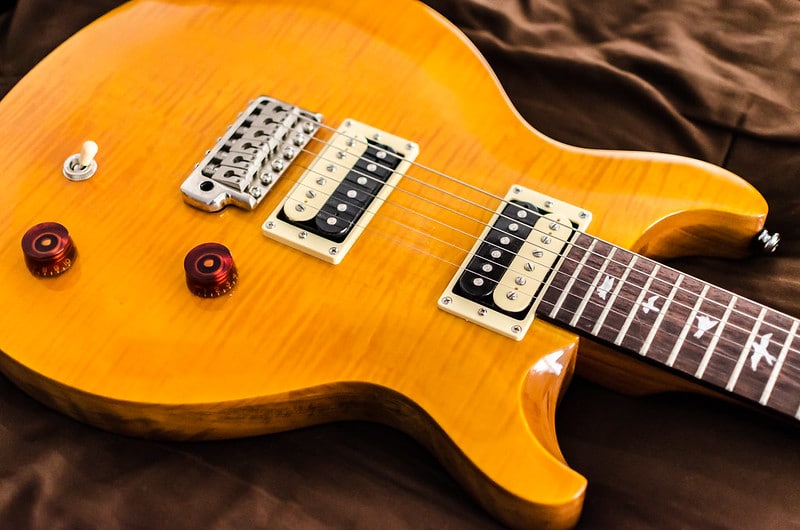 The reliability of these humbuckers is astonishing. You can expect them to last a long time. They won’t disappoint you in terms of versatility as well. The set of controls is another feature that eases things up for you.

There is one knob that controls volume, and the other one adjusts the tone. You can successfully switch between the pickup configurations with the lever. For the split of humbuckers into single coils, you can use the switch.

The S2 in PRS S2 stands for Stevensville 2. The PRS guitars have been in high demand since ever. In 2013, the addition of S2 versions was made to the PRS. There was a certain gap between the CE and CE line that was successfully bridged by the S2.

The S2s can be regarded as the stripped-down versions of the higher-end instruments. However, they are different in multiple aspects from the SEs. 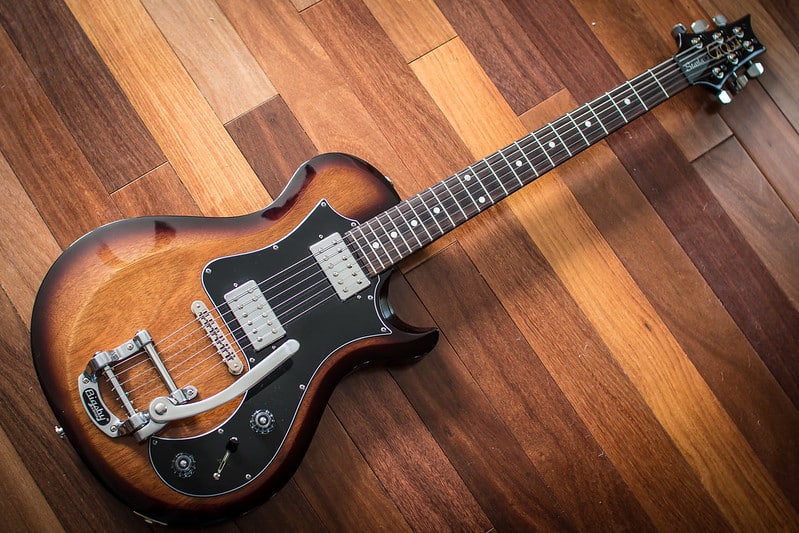 Not only do you get to have the PRS patented Tremolo, Molded bridge, but the SE has Nickel Hardware and PRS Signature strings as well. This model ensures all your guitar-playing needs are fulfilled.

The material used in the construction of the guitar body is chosen with care and attention to detail. Talking about the pickup system, it is also unmatched.

PRS guitars are quite popular for their finish, and the SE model keeps the legacy. As far as the hardware is concerned, it is great with its generic feeling. Players of the SE have got nothing to complain about. However, consider using locking tuners. 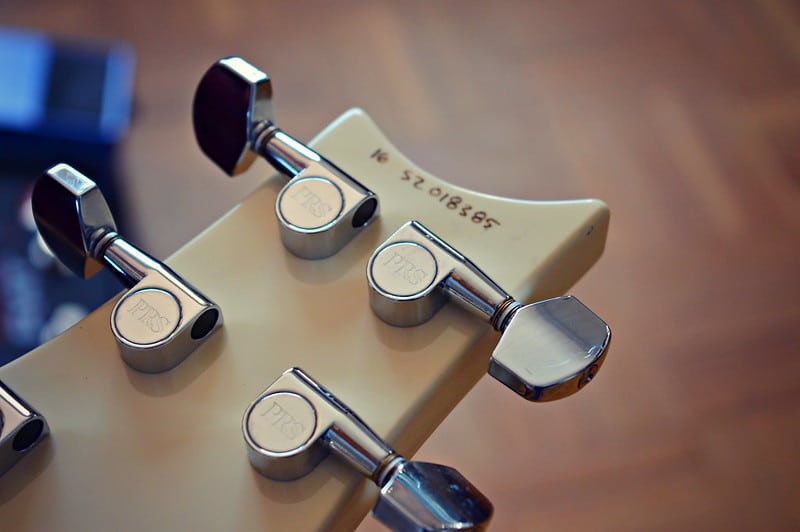 The PRS factory in America is where PRS S2 guitars are constructed. In addition to the S2 models, the higher-end CE and Core models are also made in America.

As far as the key components of guitars like pickups are concerned, they are manufactured in Korea and Indonesia.

The greatness of the S2 is clear from the fact that it has 24 frets on it. The material used for the construction of the fretboard is Rosewood which ensures the richness of the tones.

The 3-blade switch is yet another astonishing feature that is located on the tone control and enables you to control all the tunes. 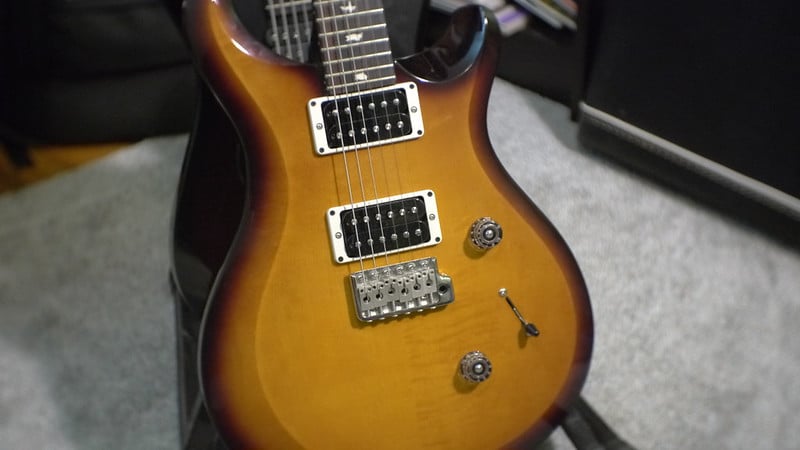 The top wood of the S2 guitar is made of Curved Figured Maple, and the back wood is Mahogany.

With an ergonomic design, the S2 uses Mahogany for its body and features a flat top. Most guitar companies use cheap alternatives to Mahogany for the guitar body, which ruins the tone and sound effect.

The material used in the neck of the S2 is Mahogany, and the fretboard is Indian Rosewood. You can find similarities in the guitar neck of the S2 with the PRS core line.

However, it’s only S2 that allows its players to access the highest frets. Yes, you read it right. Even the 24th fret is accessible.

The finish of the guitar is made in antique white, which ensures great volume and resonance.

Guitarists and musicians can completely trust the S2 with durability and performance. You can check the versatility offered by this model by playing a wide range of genres. All you need to do is tune the guitar as per your preferences.

Professional players who are in search of a rock-solid guitar on a budget can get the most from the PRS S2s.

The price range of S2 is $1000-$2000 varying on the grounds of specs and model. The playability and sound of the guitar are usually not supposed to be coherent with the price, but in the case of S2, the cost fits pretty well with the features.

Those guitarists and musicians who are looking for the versatility of a high-end guitar, cannot go wrong with the PRS S2. On the other hand, in terms of high-quality features and affordability, the PRS SE is a great choice.