The debate on the effect of wood type on the tone of guitar has been going on since the launch of guitars. Whether you are a beginner or an advanced player, you have to be picky about the type of wood used in guitar manufacturing.

With different wood types having different compositions and structures, the guitar tends to change its properties, tones, and more.

That is why it’s not just the aesthetics and looks of the guitars that are affected by the wood type, but the latter also ensures that you are getting the right type of resonance, especially if you are into acoustics.

Each wood type has distinct features which need to be considered whenever you have to make a choice.

That way, it is easier for you to find the best one for yourself. Sapele and Mahogany are two of the most commonly used wood types for guitar manufacturing.

A few key differences between the two of these wood types can decide which one can meet your guitar needs the most. Make sure you choose the right one for the seamless experience on guitar.

The Differences Between Sapele vs Mahogany

Sapele is a plant from the family of Meliaceae. Having a scientific name of Entandrophragma cylindricum, Sapele has its origin in West Africa.

This African tonewood is known for its stability and hardness. You do not need to touch the Sapele guitar to check its hardness because it is clearly visible even when you just take a glance at the instrument.

When compared with African and Honduran Mahogany, Sapele is harder than both. However, its hardness doesn’t stand in the way of carving.

There are three common textures of Sapele that include plain, pommeele, and figured. They differ on the grounds of the region and tree.

Sapele is not as popular as Mahogany. There is a high chance that beginners might have no clue about Sapele wood type. However, more and more guitarists and musicians are using Sapele guitars, thanks to the amazing features offered by Sapele.

The sound produced by the guitar is not solely dependent on the wood type used in the manufacturing of the guitar.

There are other factors also, including the rest of the materials used, the manufacturer, the methods used in the construction, and many more.

The sound produced from the Sapele tonewood is bound to have certain similarities with the Mahogany, but they also have distinct differences from each other.

The treble presence of Sapele is stronger than that of Mahogany. As far as the overtones are concerned, they also are more complex in Sapele.

The use of Sapele wood for the guitar body has been very successful because it is visually appealing. Its finish is pretty great. The thin sheet used on the side of the guitar body can easily let the Sapele peel off.

The hardness of Sapele comes again as a great feature that prevents the wood from damage and doesn’t require as much care and maintenance. 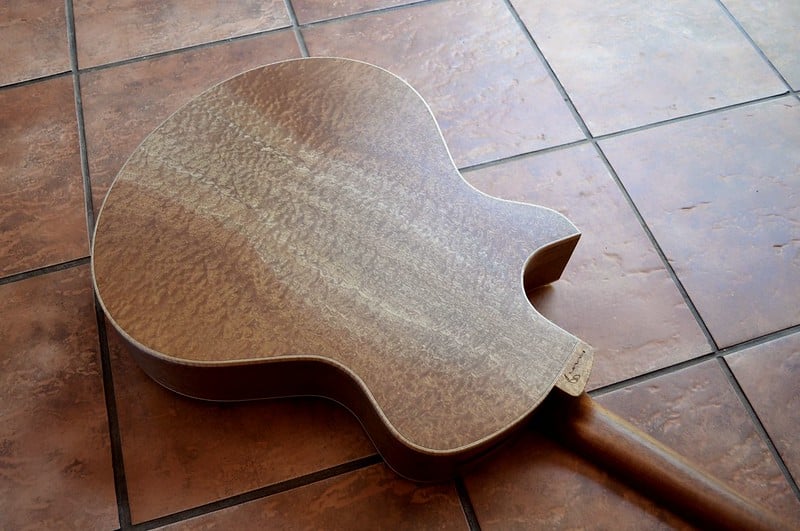 In the pre-war era, on the list of the most widely-used tonewoods, Mahogany stood on the top. The credit for its immense popularity goes to guitar makers Gibson and Martin.

Most of the time, it is used as a cheaper alternative to the expensive rosewood. However, that doesn’t mean it compromises the quality.

Mahogany includes a number of different wood types. The area where it is widely recognized is the neck and body of the guitars. The two major types of Mahogany are Honduran Mahogany and African Mahogany.

Both these types have almost all characteristics except for the hardness, which is more in African Mahogany. In terms of quality, Hondurans lead the charts, and therefore, it is used for top wood.

The color of Mahogany is reddish-brown with a little darkness to it. This color makes the instrument easily recognizable. Mahogany has an amazing output that sets this wood type apart.

Even after using the Mahogany guitar for years, you won’t find any difference in its strength.

In simple terms, Mahogany is a medium to heavy wood that is mainly harvested in Central America and Africa. There is a certain softness and warmth to the tone of Mahogany. If the highs are unpronounced, the sound of Mahogany is very appealing.

The worldwide use of Mahogany in the making of acoustic and electric guitars has been a key reason why it is called a staple tonewood.

When compared with a bunch of other wood species, you can clearly distinguish Mahogany on the basis of its high resilience. Luthiers are highly dependent on this source.

No matter what type of Mahogany it is, it will produce the tone just like the other types. The general tone produced by Mahogany is warm, and it has strong mids.

Talking about the treble and the bass, they are subtle and soft. The frequent use of Mahogany is observed with the brighter top woods to produce warmer tones and stronger mids. The fundamentals are strong and crunchy.

Use Of Mahogany In Popular Guitars

Whether the body is slabbed or laminated, Mahogany has found its use in both. The use of Mahogany for neck wood is also pretty common worldwide.

Over the years, the number of wood makers who have utilized Mahogany for solid and semi-solid designs has been huge.

The classic guitars of Les Paul Special, Gibson Les Paul Jr, and SG feature Mahogany. Nowadays, the purchase of Les Pauls is at its peak, and the credit for it goes to the well-aging and great sound produced by Mahogany.

Similarities Between Sapele And Mahogany

Some people confuse Sapele with Mahogany because of the striking resemblance they share. Both of these wood types are used as back/side wood and top wood of the guitar.

As far as the guitar neck is concerned, both Sapele and Mahogany are equally popular for this guitar part.

Differences Between Sapele And Mahogany

Starting with the price range, Mahogany is more expensive than Sapele. The reason behind that high price range is the huge demand for wood and the remarkable properties it flaunts.

The demand for Sapele has also been increasing for the last few years. The study of the differences between Sapele and Mahogany in terms of properties, color, tone, demand, price, and availability can reveal more about these wood types.

Mahogany has a scientific name of Swietenia, whereas Sapele wood is scientifically called Entandrophragma cylindricum.

The use of Mahogany wood is immense in both exterior and interior works. But the resistance it offers to pests and moisture is limited.

Therefore, interior works get the most out of Mahogany, and it is used for furniture, boatbuilding, flooring, cabinets, and musical instruments.

The high density and hardness of Sapele make it suitable for exterior projects and flooring. The common use of Sapele lies in veneer, cabinetry, plywood, flooring, furniture, musical instruments, and boat construction. 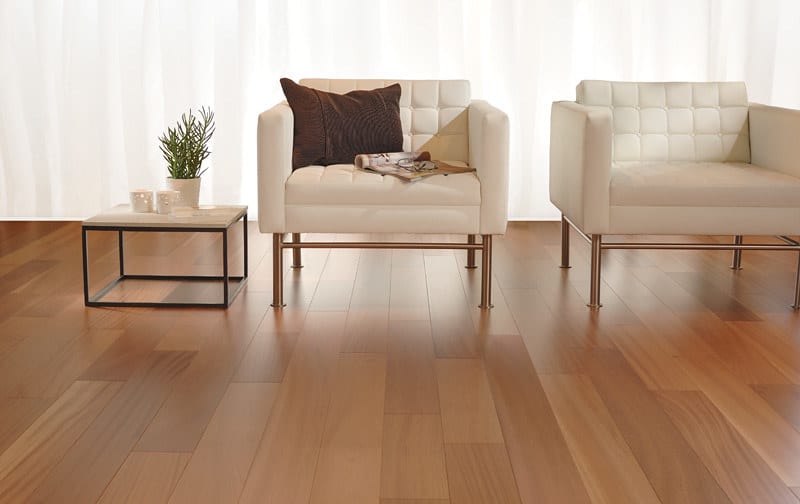 Mahogany is reddish-brown in color, and it darkens with time. On the other hand, the color of Sapele ranges from golden to dark reddish-brown. With age, there is more darkness to it.

The looks of Mahogany and Sapele can be quite confusing for an untrained eye. This similarity in appearance has led to the bunch of acoustic guitar manufacturers marketing Sapele guitars as Mahogany guitars.

The buyers are equally liable for mistaking Sapele for Mahogany.

However, there is still a little difference in lines that can set these two wood types apart in the guitars. Mahogany guitars feature closely spaced lines, while that of Sapele has wide lines.

The guitar tone of both Sapele and Mahogany sounds similar. One cannot clearly tell which is better. It can vary from individual to individual in terms of who listens to it.

The hardness of Mahogany wood is 800-900 lbs, while that of Sapele is 1410 lbs. That is why Sapele is harder than Mahogany.

Both Mahogany and Sapele can bend easily.

Mahogany is the kind of wood that is pretty easy to be worked with. You can cut and mold it in any size and shape. 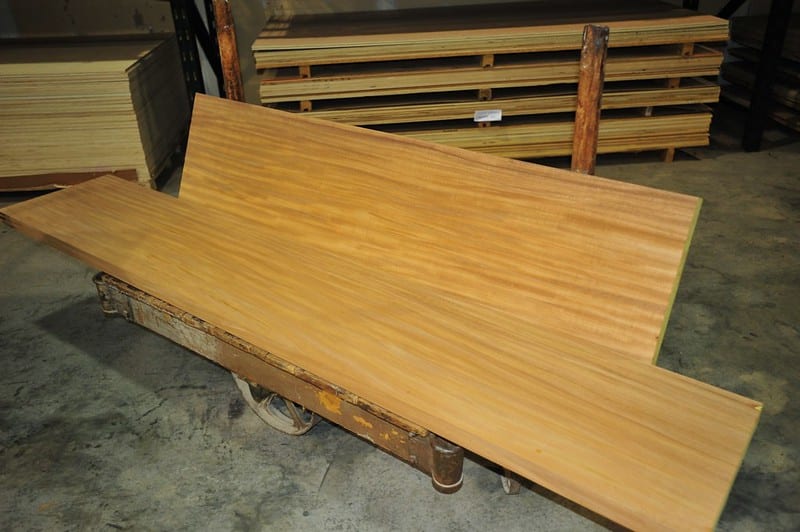 However, the tearing can get difficult because of the interlocked gain in Mahogany. Regardless, the gluing and finish of Mahogany are great.

The interlocked gain of Sapele can be problematic in machining operations. The hardness of Sapele may seem like a hindrance to workability, but that’s not the case.

One can easily work with Sapele. The reaction of Sapele with iron can cause staining and discoloration. 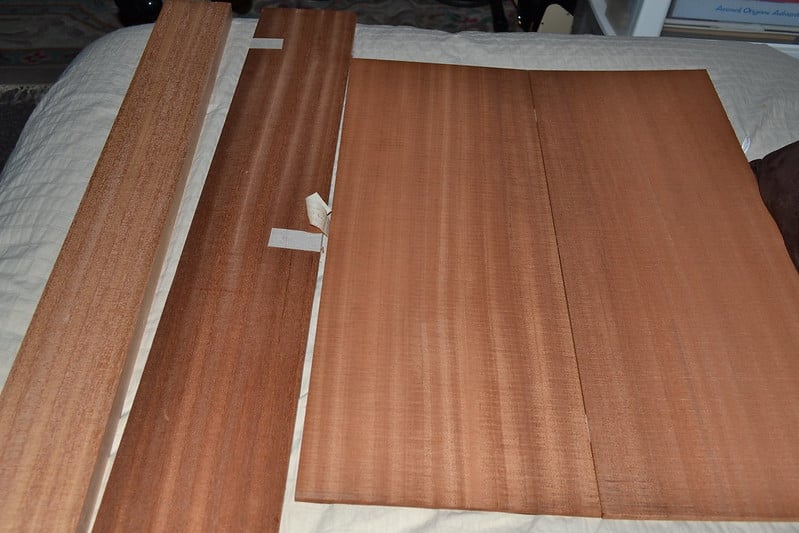 You can find Mahogany from exporters and a large number of wood sellers. Most of the sellers offer Mahogany at custom timber sizes, which is pretty great.

The less availability of Sapele is a major factor behind its high price range in some areas. However, you can also get it at an affordable price. It depends on who your seller is.

This is why, if you opt for Sapele, you won’t have to compromise on the tone quality and build and still get an affordable instrument for longer use. 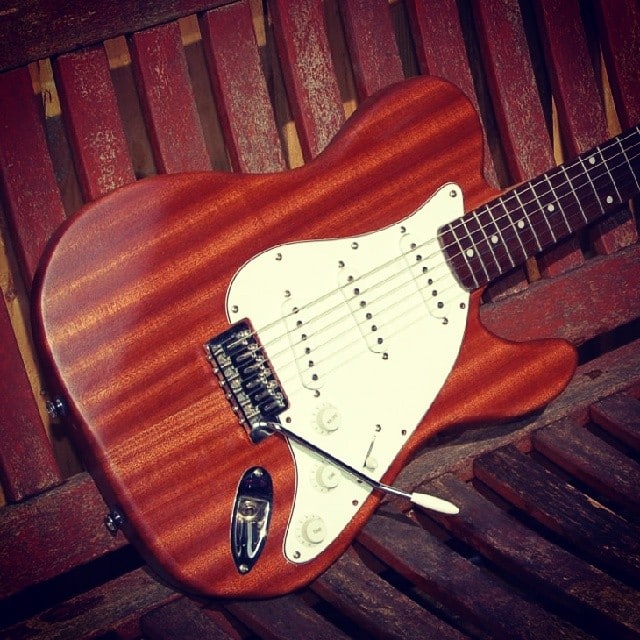 Guitar manufacturers have always considered Sapele as an excellent Mahogany replacement, thanks to the hardness and stiffness features by Sapele.

In addition, it also has a better bending strength than Mahogany which is quite useful for exterior applications. Lastly, Sapele doesn’t require any use of chemicals for the treatments.

Most of the guitars use Sapele and Mahogany wood types for their construction. The analysis of tonal performance reveals that both of these wood types produce warm tones, with Sapele winning with subtler overtones.

If you are looking for a stronger treble and brighter tonal characteristics, you cannot go wrong with Sapele. On the other hand, no other wood can produce the warmth and depth in the tone as Mahogany does.