From the years between 1600 and 1750, the Baroque period saw the creation of some of the greatest masterpieces ever composed. With well-known names such as Vivaldi, Monteverdi, Bach, and Pachelbel, just to name a few, this 17th and 18th-century European style of music were simply breathtaking.

In particular, German composer Johann Pachelbel (1653 – 1706) was one of the most influential composers of that period. Like all Baroque music that was produced in that era, Pachelbel’s compositions were overly ornamented and often embellished. Pachelbel’s organ playing skills were said to be unrivaled and he is credited with helping to institute the tradition of German organ music.

Read: The Best of Johann Pachelbel

Pachelbel’s music was extremely well known during his lifetime. However, as the Baroque era evolved and consequently came to an end, Pachelbel faded into history. Fortunately, his music was revived and rediscovered by musicologists in the early 20th century. Although he is often categorized as the one hit wonder of the Baroque era, the German composer and organist is also responsible for helping to introduce the south German organ style into central and north Germany. Here are 10 interesting facts about Johann Pachelbel:

Pachelbel was born in Nuremberg in the autumn of 1653 to Johann Hans Pachelbel who worked as a wine dealer and Anne Maria Mair. From a very young age, Pachelbel displayed an early penchant for learning. Aside from attending regular school, Pachelbel also had two music teachers- Heinrich Schwemmer for teaching him about the fundamentals and principles of music and George Kaspar Wecker for training him how to compose and how to play the organ.

2. He worked as an organist all his life

Throughout his life, Pachelbel served as a respected organist in various capacities. His long illustrious career started when he received a scholarship to enrolled at Gymnasium Poeticum at Regensburg on a scholarship. He worked as a court organist under Daniel Eberlin in Eisenach, in a Protestant church in Erfurt, and so much more.

In 1681 Pachelbel got married to Barbara Gabler but she and his infant child died in a plague that struck his town in 1683. Soon after the death of his wife and child, Pachelbel composed a series of chorales titled “Musicalische Sterbens-Gedancken” or (“Musical Thoughts of Death”).  Although he suffered this tragedy, Pachelbel bounced back soon after and remarried Judith Drommer in 1684; they consequently had seven children. One of these seven children would be the organist, harpsichordist, composer and Wilhelm Hieronymus Pachelbel, who was born 1686.

Although he produced a lot of other amazing works, Pachelbel is most recognized now for his Canon in D major. Pachelbel’s chamber music, which is the field to which Canon in D belongs, started to change dramatically from bleak organ music to a more upbeat tempo. As part of the chamber works, Pachelbel creatively wrote a six-part suite that he titled “Musicalische Ergötzung” (“Musical Delight”).

Unlike Musical Thoughts of Death which was done earlier, Musical Delight was actually quite enjoyable. Although it does have slight tinges of melancholy, which is characteristic of the Baroque period. Overall, it is this delicate balance that is so beautiful about the piece.

5. Most of his chamber works did not survive

Pachelbel often composed his music on papers and personal journals. As such, he published very few of his works because back then you had to print using copper engraving, which was quite expensive at that time. The copper engraving was necessary because it appealed to audiences but Pachelbel simply could not afford it, which explains why most of his artwork and compositions are lost.

6. Pachelbel and the Bach family

Pachelbel has close ties to the Bach family, and his style of music played an instrumental role in influencing and enriching that of Johann Sebastian Bach indirectly. The thing is, Pachelbel was actually Johann Christophe Bach’s teacher. Christophe passed down everything that he had been taught by Pachelbel to his younger brother Johann Sebastian Bach, which is why it is said that Pachelbel influenced JS Bach heavily albeit indirectly. Aside from his musical style, it is also a well-known fact that Pachelbel’s artwork influenced the manner in which JS Bach composed music.

Pachelbel spent a large portion of his life playing for churches across Germany and Vienna. As such, he composed most of his music for worship services for both Catholic and Protestant churches. The pieces that he composed for Catholic worship include masses, motets, and Magnificats. However, he excelled the most at chorale prelude, which was a protestant favorite.

Pachelbel was best known for his innovative and unique musical style, which is how he influenced so many upcoming composers of that time. He was highly skilled at discovering new ways to embellish the chorale tune to make it sound more alive. His musical style influenced the some of the greatest composers to come after him such as JS Bach and Dietrich Buxtehude.

Apart from writing for Protestant and Catholic churches, Pachelbel also wrote some secular music purely for the purposes of entertainment. He created several suited for harpsichord, variations on popular melodies for different types of instruments and sonatas for violin. His most well known secular piece was  Hexachordum Apollinis, which is a collection of 6 arias that have layers of harpsichord, as well as the organ.

Today, Pachelbel he is remembered fondly as one of the last greatest composers of the Nuremberg practice and is considered the last true southern German composer. He created over 500 pieces through the course of his life, which is a huge achievement for any composer worth their salt. 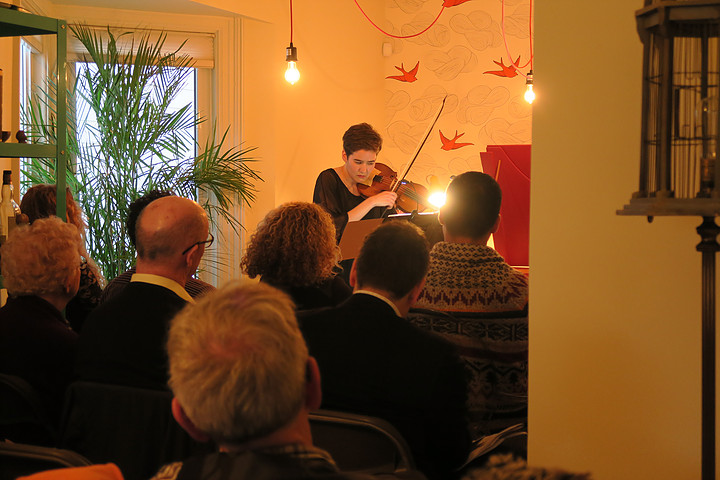 Jordan Smith - Oct 20, 2016
Toronto-based Pocket Concerts is promoting a new and exciting way of experiencing classical music. Rather than playing in the concert hall, they bring the...