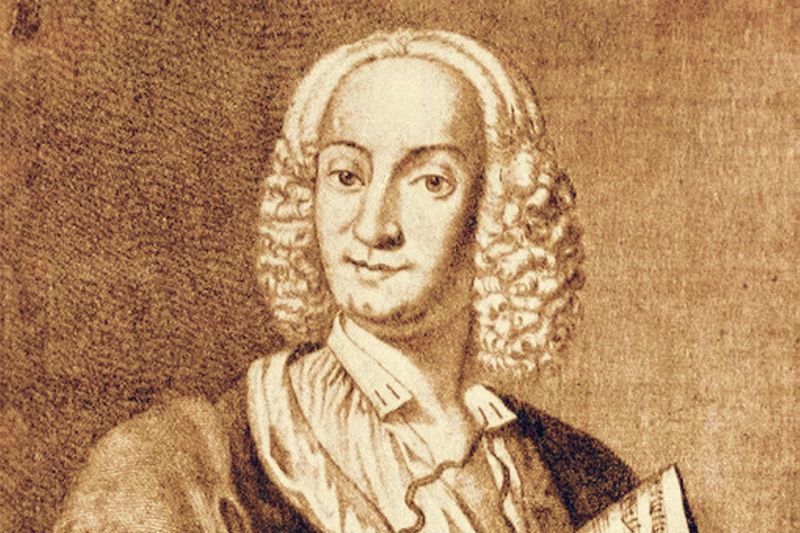 In early 18th century Venice there lived a self-assured red-haired priest named Antonio Lucio Vivaldi. Traveling with an entourage that nearly always included his elderly father and several young women, he oversaw the performance of operas and instrumental pieces that have come to define classical music as we now know it.

He always worked quickly, and most of his pieces—unusual for the genre—were both short and memorable. In that respect, it could be said that he invented the radio single (albeit several centuries before the invention of radio). His compositions are immortal and ubiquitous; if you can hear music, you’ve heard his work.

But he isn’t very well known as a person, so it’s understandable that we might get an unrealistic impression of who he was. If you see him as the archetypal composer of his era, you might imagine a relatively healthy, sheltered aristocrat who was paid large sums of money to create dinner-party entertainment for the idle rich. Outside of the large sums of money (which dried up soon enough), there’s not much truth to any of that. He was a priest who couldn’t perform Mass, a traveler who couldn’t walk to the grocer on his own, a correspondent of nine princes who was buried in a pauper’s grave. In his personal life, he was accused of being both a celibate eunuch and a promiscuous sleazeball, his music of being both too trite and too nontraditional. Even our historical assessment of Vivaldi contains contradictions: it is often said that his music went ignored for two centuries, but he dominated European classical music at his peak and was later a primary influence on J.S. Bach.

So who was he? For the most part, we’ll never know; the amount of documentary evidence surrounding his life was impressive by the standards of his era, but pretty scant by the standards of ours. But even if we stick to the things we can figure out, the red priest of Venice led a really, really interesting life.

1. From the very beginning, Antonio Vivaldi found it difficult to breathe.

Vivaldi was given a special dispensation not to perform Mass because, even as a young man, he sometimes couldn’t physically make it through the Eucharist. As he explained in a letter to his patron:

“After being ordained a priest I celebrated Mass for a year or somewhat longer, after which I stopped because my ailment forced me to leave the altar three times without finishing Mass. I therefore spend most of my life at home, which I can only leave in a gondola or coach, because my chest ailment or constriction of the chest does not permit me to walk …

“No nobleman calls me to his house, not even our prince, because they all know of my condition. I usually go outside immediately after lunch, though never on foot … My travels were always very expensive because I always took along four or five persons to assist me.”

This “constriction of the chest,” which Vivaldi struggled with since infancy, has been described by various people as asthma, angina, or an unspecified neurological condition. Since Vivaldi was an accomplished violinist who sometimes performed with his own orchestra on opening night, we can assume that he had excellent fine motor coordination skills and had reasonably high stamina as long as he didn’t need to stand or speak. That seems to favor asthma as the most likely culprit (in the 17th century, asthma could have been extremely debilitating), but obviously there are other possible explanations.

Whatever Vivaldi’s medical condition was, it’s easy to imagine how it might have had a profound effect on both his career choice and his compositional style. BBC Music’s Michael Talbot has argued that Vivaldi’s limited physical mobility may, in fact, have inspired his remarkable mobility as a composer:

“[O]ne can argue that Vivaldi had a general preoccupation with mobility that left a distinct mark on his activities as violinist and composer … The very layout of his scores expresses vigorous movement. Voices and instruments operate within unusually wide compasses, darting up and down, criss-crossing and causing the texture to transform itself constantly. Instead of bunching his parts close together, Vivaldi likes to spread them wide open and thereby create extra room for manoeuvre. In his melodic and accompanimental lines alike, wide intervals – typically, compound intervals (those more than an octave) – are privileged, such as the hiccupping ninths at the start of his Concerto funebre, RV 579.”

2. For most of his professional life, he was the resident musician at a Catholic orphanage.

The building we now call the Metropole in Venice has quite a history. By Vivaldi’s time, it was already several centuries old—having been built as a hostel of sorts for Crusaders—and had been subsequently repurposed as the Ospedale della Pietá, where it simultaneously served as an orphanage, convent, hospital, and concert hall. Vivaldi was not the first or last priest to serve as its director of music, but he was certainly the most famous. There he supervised the women’s choir, sixty members strong, which performed beautifully, albeit out of view of the audience—the idea of women performing in public in any visible capacity being viewed, by the lurid and misogynistic standards of the time, as inappropriately sexual.

Antonio Vivaldi served, intermittently and in various capacities, from 1703 (the year he published his first composition) to 1740 (the year before his death). He traveled all over Europe, but for him as much as the nuns and orphans who lived there, the Ospedale della Pietá was home.

The British travel writer Edward Wright wrote of the Ospedale and its performances:

“Those put into the Pietá are generally bastards. There are a prodigous number of children taken care of in the hospital; they say they amount sometimes to at least six thousand, and that before the erection of this charity multitudes used to be found which had been thrown into the canals of the city. Every Sunday and holiday there is a performance of music in the chapels of these hospitals, vocal and instrumental, performed by the young women of the place, who are set in the gallery above and, though not professed, are hid from any distinct view of those below by a lattice of ironwork. The organ parts, as well as those of other instruments, are all performed by the young women. They have a eunuch for their master, and he composes their music. Their performance is surprisingly good, and many excellent voices are among them. And this is all the more amusing since their persons are concealed from view.”

3. Most of his operas are probably gone.

Vivaldi said he composed 94 operas, a figure that seems entirely plausible, but only 22 operas survive. While Vivaldi is not primarily celebrated for his operas, he spent a great deal of time organizing and promoting them; outside of Venice, it is plausible that he was known primarily for his operas during his lifetime—but while some 500 shorter works survive, most of his operas did not.

4. He was a victim of identity theft.

Nicolas Chédeville, an otherwise uncelebrated musician of the era, fraudulently sold some of his own work as a series of original Vivaldi compositions during the late 1730s. The first of these pieces, “Il Pastor Fido,” would ultimately become Chédeville’s best-known composition. It is still performed to this day—and still, from time to time, incorrectly attributed to Vivaldi.

5. The Archbishop of Ferrara derailed his career.

As a Roman Catholic priest of the 18th century, Antonio Vivaldi was officially celibate. But it seems to have been a commonly held view that he had a sexual relationship with his traveling companion and favorite contralto Anna Maddalena Tesseire, better known by her stage name Anna Giraud, and this is a view that Archbishop Tommaso Cardinal Ruffo apparently held.

“After so many maneuvers and a great many toils the opera is now ruined. His Reverence, the Apostolic Nuncio, had me summoned today and commanded me in the name of His Eminence Cardinal Ruffo not to come to Ferrara to mount opera, because I am a cleric who does not say Mass, and because I am friends with the singer Girò. Your Excellency can imagine my state of mind at such a blow. For this opera I am burdened with six thousand ducats in signed contracts, and so far I have already paid out more than one hundred sequins. It is impossible to perform the opera without La Girò because it is impossible to find another prima donna of her caliber. I will not allow the opera to be performed without my presence because I will not entrust so large a sum to the hands of others. On the other hand, I am obligated by these contracts, hence this sea of woes. What troubles me most is the stain His Eminence Cardinal Ruffo has attached to these poor women, the like of which has yet to be seen.

“Over the past fourteen years we have appeared together in many European cities and their modesty was everywhere admired, and the same can be said of Ferrara. They make devotions every week, to which sworn and authenticated records attest.”

If Vivaldi and Giraud did have a discreet secret relationship (and we are taking a considerable leap in assuming as much), it would not have been unusual by the standards of the clergy; that on its face would not have been enough to provoke Ruffo’s wrath. Nor is it likely that Ruffo had decided that Vivaldi’s inability to perform Mass was scandalous on its own; Vivaldi’s medical condition was well known, and in any case many priests of his generation focused on music to the exclusion of more traditional liturgical roles.

So what really happened? Several possibilities come to mind. One is that Vivaldi misunderstood, or misrepresented, the archbishop’s reasons for having the performance canceled. Another is that the archbishop was scandalized by a public perception that Vivaldi and Giraud had a relationship, and did not want to encourage that perception by allowing them to perform together in his archdiocese. Another, still, is that Ruffo did not like the fact that Vivaldi had helped female performers become celebrity figures. Whatever the reason, Vivaldi never financially recovered from Ruffo’s intervention. While Vivaldi’s career was still active when he died four years later, he had no financial resources to speak of and was buried in a pauper’s grave.

6. His body of work was painstakingly reassembled in the mid-20th century.

By 1926, nearly all of Vivaldi’s work had been lost. So when Turin University musicologist Alberto Gentili was presented with a box of incomplete, unsorted pages from hundreds of Vivaldi’s compositions, he began a ten-year investigation to hunt down the remaining pages and place them in their original order. The end result: 319 complete Antonio Vivaldi compositions that had been lost to the world for nearly two centuries.

The explosion of new work from Vivaldi—a relatively obscure musician whose influence had been long-acknowledged, but whose music had all but disappeared—gave his work a new public debut. It was as if Vivaldi had been born a second time, and had a very short, implausibly prolific career. By the 1950s, his music held a unique place in the canon: Antonio Vivaldi was acknowledged by scholars as one of the greatest and most influential classical musicians in history, but he was also seen by the listening public as fresh, mysterious, and unfamiliar. No other composer of similar prominence has experienced that kind of rebirth, and it’s unlikely that any ever will.