For this article, I am going to take a look at some of the famous pieces of Baroque music. What is interesting about this particular period of music is just how many works from that era have remained popular to this day.

Perhaps it is the sense of majesty and occasion that helps maintain the Baroque on our playlists, or the sheer sparkling brilliance of so many of its composers. Here are some of my personal favourites that I hope will inspire you to look further into this rich period of musical history.

The Brandenburg Concertos represent a set of pieces that in many ways captures the spirit of Bach’s secular compositions. They were completed as a set in 1721 and whilst they stand perfectly as individual works to be performed alone, they work even more cohesively when performed together.

Bach composed these concertos with the sincere wish of becoming employed as a Court composer to the Margrave of Brandenburg but his wish was not granted. It did, however, leave the world with six incredible concerto grossi.

The instrumentation of each concerto is highly inventive. In concertos 4 and 6, Bach looks back to the scoring of an older music as he employs Viola da Gambas and recorders that had become quite outdated by the late Baroque. This gives an unsettling dark tone to the sixth concerto as Bach uses no violins at all.

Each concerto gives the spotlight to different instrumental groups or families.  The second concerto in F major, for example, uses a solo group consisting of trumpet, recorder, oboe and violin with the trumpet dominating the solo material.

In the third concerto, Bach only uses strings and continuo, dividing as they need to, to provide solo and tutti passages. In the fifth concerto, the harpsichord takes a leading role, stepping away from the more common part of an accompanying instrument.

There is such an abundance of structural inventiveness throughout these concertos that there is not the time to devote to it here. Even though Bach was not impressed with his work, these concertos remain amongst the most famous pieces ever written.

Next, to the Brandenburg Concertos, this set of pieces must rank alongside one of the most famous sets of works from the Baroque period. Vivaldi composed these pieces between 1720 and 1723 although the precise dates are not agreed. Much of Vivaldi’s working life was spent working in the Ospedale della Pieta in Venice. This was, in essence, a boarding school for girls who came from reasonably wealthy merchants, not as many claims an orphanage.

The Four Seasons is a testament to the outstanding ability of these young ladies who would have performed the vast majority of Vivaldi’s work at the time. They are also a clear demonstration of the astonishing talents of Vivaldi as violinist, composer and teacher.

Long before the idea of programmatic music became established in composers’ minds, Vivaldi wrote these works to depict the characters and moods of each season. The works are scored for solo violin, a small string group plus harpsichord. Each concerto is incredibly original with its shivering portrayal of Winter with tremolando violins to the frightened shepherd boy in Autumn as the storm approaches.

Written in just 24 days, this is perhaps the most celebrated piece of Baroque choral music ever written. There are claims that the work is semi-autobiographical which to the people of the time would have been unthinkable given the work is written as an affirmation of Christ’s triumph over death. Never-the-less, Handel was not prospering in 1741 and following the failure of his last opera, and loss of favour with the London crowds was looking for his own musical resurrection.

This oratorio sets the texts of Handel’s long-time collaborator and librettist, Charles Jennens. Jennens chose texts from both new and old testaments, in particular, The Book of Isaiah. Messiah is formed into three large parts and begins with a news of Christ’s birth as predicted by the Jews. The second section has the Passion of The Christ as its focus, full of emotion, rage and grief. In the final section of the oratorio, the light returns with an overwhelming sense of joy and peace at the Resurrection and the prospect of Christ’s return.

Throughout this two-and-a-half-hour piece, we hear the beauty of Handel’s melodic gifts and the startling power of his setting of this biblical text. Handel never agreed on a final version of this oratorio but in whichever version you hear it the purity and creativity sing through effortlessly.

For the final famous Baroque work, I return to Bach. These six suites for solo cello represent another almost unimaginable musical achievement by Bach. Together these pieces add up to nearly three hours of music and magnificently show Bach’s mastery of the suite as a musical form alongside his knowledge of the cello. The suite as a form comprises most usually of an allemande, courante, sarabande and gigue, defining each movement broadly in a fast-slow pattern. Bach also includes minuets, bourreés and gavottes in 3, 4, and 5 of the Suites respectively to bring a consistent symmetry to the pieces. Each Suite is also preceded by a prelude.

The technical demands of the music are apparent from the outset but so also is the craftsmanship. It is the first of the suites in G major that is the most famous of the set and begins with a prelude based almost entirely on an arpeggio figure. This piece has been used in many films which may contribute to its fame and popularity. The fourth suite in Eb major is often considered to be the most technically demanding of them all as the key is not one that easily lies under the fingers of the performing cellist.

The Sarabande movement in this suite is one of the most exquisitely lyrical pieces from this master. Much speculation surrounds the origins of the final suite (No.6) that contains some notes in the very highest register of the cello raising the question as to whether it was composed for a piccolo cello. The final suite brings with is a wonderful sense of joy and achievement that pleasingly concludes these stunning pieces. 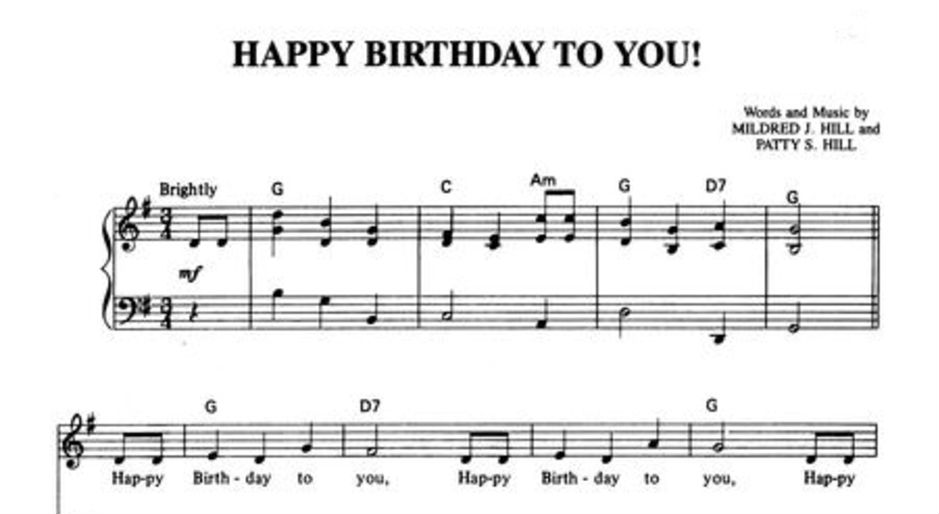 Jordan Smith - Mar 10, 2019
A US court has ruled that one of the world’s most popular songs, Happy Birthday, is no longer under copyright. This could potentially mean...

7 Short Piano Pieces for Beginners To Get Started