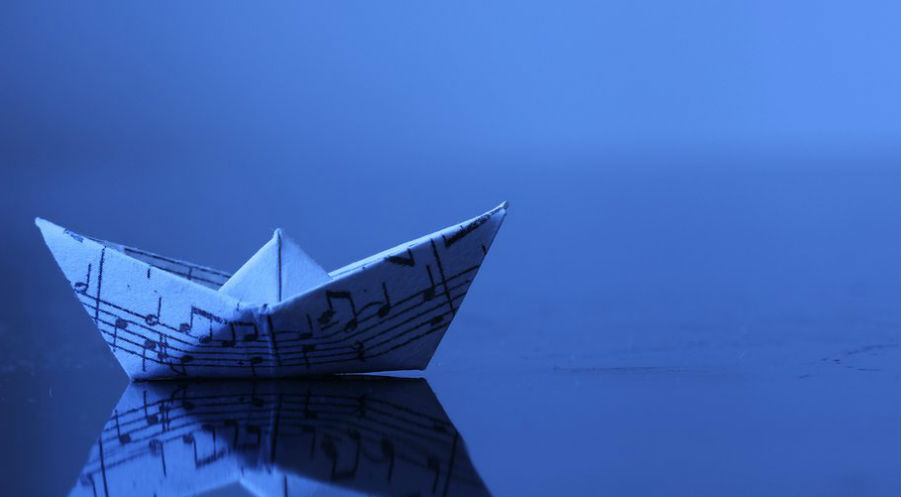 The water element abounds in classical music throughout the centuries: just consider Händel’s Water Music (whose title, however, just references the fact that his music was to be performed on a barge), Schubert’s lieders such as Die Forelle, Strauss’s An der Schönen blauen Donau or, more recently, James Horner’s Hymn to the Sea.

It might be worth noting, however, that during the late 19th and early 20th century, the rise of the movement of Impressionism in music led to even more vivid depictions of water, with composers such as Ravel and Debussy devoting many of their compositions to the waves of the sea or to the flow of the river–think, among others, Ondine for the former Reflets dans L’eau for the latter.

Here are eleven examples of water-themed music, ranging from renditions of epic poems to the mere descriptions of landscapes where mighty rivers flow by.

Also knowns as Fingal’s Cave, The Concert Overture The Hebrides was inspired by Mendessohn’s visiting the eponymous cave. Having been composed in 1830, The Hebrides is an early example of a tone poem, in that it is meant to describe the beauty of the cave itself rather than telling a story. In fact, during his travel to Scotland, he had sent a postcard to his family with the opening phrase of the overture written on it, claiming it provided the most fitting description to the places he had visited. Two main themes can be discerned: the first is meant to describe the stunning beauty of the cave, the second conveys the idea of the rolling waves.

Whether you love them or you loathe them, you must be at least a tiny bit familiar with impressionistic artworks, their misty seascapes, and their shimmering lights. With his La Mer, Claude Debussy translated impressionism onto music sheets, combining impressionistic harmonies and unusual orchestrations. In doing so, he succeeded in suggesting the presence of wind and waves, what scholar Caroline Potter described as “musical onomatopoeia”, that evoke the movement of waves and the pitter-patter of falling droplets of spray. To depict those elements, however, he avoided the much-overused arpeggiated triads, previously favored by Wagner and Schubert. La mer consists of three movements: De l’aube à midi sur la mer, Jeux de vagues, and Dialogue du vent et de la mer.

This symphonic poem by Belgian composer Armand Marsick is meant to evoke the atmosphere surrounding a spring during summer nights.

Part of Ravel’s suite for piano Miroirs, Une Barque sur l’ocean depicts the journey of a boat as it sails upon the waves of the ocean. The ocean currents are rendered by arpeggiated sections and sweeping melodies. Ravel later provided orchestration for Une barque.

At the turn of the twentieth century, sea-related compositions were in vogue in England: Stanford authored Songs of the Sea, Elgar Sea Pictures and Frank Bridge The Sea. Also, Debussy himself completed his La Mer while in England. The Symphony, which lasts for approximately 70 minutes, contains two motives, a harmonic motive of two chords and a melodic figure juxtaposing duplets and triplets. Scored for Soprano, baritone and chorus and an orchestra consisting of woodwinds, brass, percussion, organ, and strings, the Symphony is set to Walt Whitman’s Leaves of Grass.

You may not be familiar with Sir Granville Ransome Bantock, but Sibelius dedicated his Third Symphony to him. His music heavily relies on Celtic inspiration, as he was of Scottish heritage–of course, the Hebridean Symphony is the best example of that tendency. Much like his contemporaries, however, he also indulged in some decadent Orientalism.

Part of Ma Vlast, a set of symphonic poems that depict a peculiarity of Smetana’s native Bohemia, Die Moldau features the use of tone painting, as the composition itself describes the course of the river Moldau from its two small springs to its course through various landscapes ranging from a farmer’s wedding to a group of mermaids dancing in the moonlight to its eventual flowing into the Elbe. The piece contains a famous tune, which was adapted from the melody La Mantovana, attributed to a renaissance tenor and that can be also heard in Hatikvah, Israel’s national anthem.

The prelude to Mussorgsky’s opera Khovanshchina, Dawn on the Muscovy river was orchestrated by Rimsky-Korsakov after Mussorgsky’s death. When the curtain rises, we see the city of Moscow at the end of the seventeenth century–the era of Peter the Great. The combination of woodwinds and light basses and the tempo “rubato” and the slightly elegiac tone conjure more of a pastoral than a city scene.

Also known as Symphony No. 2, Rubinstein’s Ocean Symphony went through various stages of composition before reaching its final form: originally divided in four movements, it was then enriched by an Adagio in D Major and a Scherzo in F Major, movements that were supposedly taken from Rubinstein’s unpublished Symphony in B flat Major. In 1880, he added yet another movement, namely a Lento Assai in A minor.

Legend has it that Wagner was inspired to write the prelude to Das Rheingold while in a feverish state of somnambulism during a sojourn in La Spezia, Italy. In his Mein Leben, he describes the feeling of being immersed in rapidly flowing water, whose rushing he equated to an E flat major, a key that is maintained throughout all 136 bars of the prelude. The harmony shifts to A flat at bar 137, when the curtain rises and Rhinemaiden Woglinde sings (or utters) her famous protolinguistic exclamation Weia Waga Woge du Welle walle zur Wege.

Jean Sibelius, The Swan of Tuonela

A small orchestra — cor anglais, oboe, bass clarinet, two bassoons, four horns, three trombones, timpani, bass drum, harp, and divided strings — conjures an image of a swan swimming around Tuonela which, in Finnish folklore, was the island of the dead. This composition is part of the Lemminkäinen suite based on the Kalevala epic. in The Swan, Lemminkäinen, a hero, has been charged to kill the swan but, while on his mission, he is shot with a poisoned arrow.

Walt Disney had his staff work on a storyboard to Sibelius’s swan in order to include it in his Fantasia. However, it was never set to animation.