The Renaissance period of music is one of the most diverse and exhilarating in the entire history of music. When you begin to delve and explore the era more closely you will find a rich variety of musical treasures.

The word renaissance can be liberally translated from the French into English as re-birth. This gives the first and perhaps the most important clue to the vitality of this period of music. To bring a little context to the article, the renaissance would in all probability have felt like a very optimistic time in which to have lived.

Everything was changing from the sciences through to the arts with a collective sense of the possible and the new. It was the time of Copernicus, Kepler and Galileo, all of whom changed the perceptions of our world. In the world of art, Da Vinci and Michelangelo pioneered huge developments in this field and Monteverdi, Dufy, Byrd and Tallis amongst many others, lead the music of the period.

We can reasonably consider the Renaissance period of music to encompass 1400 – 1600. As with all periods of music, there is a natural overlap but for the purposes of this article, we can agree this two-hundred-year period of history to be the Renaissance. Italy was the country and culture that dominated the Renaissance.

Catherine Medici almost singlehandedly brought about many musical and artistic changes including giving her unfaltering support for the new instrument called the violin. This is in no small way altered the music that was being composed at the time as the expressive qualities of the violin effortlessly put the viol in the shade.

Instruments in regular use during the Renaissance with the obvious exceptions of voice were a curious collection compared to what we are accustomed to seeing and hearing today. The Viol family accounted for the common string instruments whilst the woodwinds would have included recorders, simple flutes and the predecessor of the oboe, the shawm.

Brass performers played valveless trumpets and the wonderfully named sackbut; an early version of the trombone. Renaissance keyboards included virginals, early harpsichords and clavichords all of which often looked far more enticing than they sounded as they were prone to tuning issues.

Lutes, mandolins, theorbo, harps and the superb hurdy-gurdy features as accompanying and solo instruments in this period of music too. Percussion instruments were mostly different forms of small to medium drums, tambourines and shakers.

Much of the rhythmic complexities of late medieval music lost favour amongst the new emerging Renaissance composers. Polyphony and counterpoint featured in both sacred and secular Renaissance music but the lines were sleeker and cadence points an increasingly important focus. This was gradually moving the harmonic attention towards the tonal system of keys we know today.

For a great proportion of the Renaissance, modal music was commonplace and gives the era a unique sound quality now perhaps more associated with contemporary folk music. The music often contains intervals like the open fifth (ie: C – G), or fourths (C -F) but as the period progresses the third and sixth notes of the scale become accepted as musically appropriate to use.

An even more clear line is drawn in the Renaissance between music for the Church (sacred) and music used at Court for example (secular). Masses formed a central part of Renaissance composers output, settings of the Latin text from the Bible. The masses would have been sung by an all-male choir, consisting of Bass, Tenors and Counter-tenors.

Churches and cathedrals were the places of choice for performances of the mass that was one of the largest forms of Renaissance vocal music. Other sacred musical forms were the Motet and the Madrigal but this was also a secular type of music too.

Some composers to listen out for from early to later Renaissance would be Guillaume Dufy, Guillaume de Machaut, Josquin des Prez and Palestrina. Palestrina had a particular gift for ‘Parody’ Masses which was based on elaborations of the cantus-firmus[1] whose origins were in much earlier Gregorian Chant.

The madrigal was one of the most important forms of music in the Renaissance as in many ways it captures the spirit of the age. Madrigals were most usually composed for four unaccompanied voices and set texts of the poets of the time in Italian, Latin, French and English.

Often the texts the composers chose to set told of unrequited love with a sense of yearning and despair that is conveyed beautifully within the intimacy of the madrigal. Other settings were more heroic and told tales of imagination and delight. Imitation and subtle counterpoint were textural devices used by madrigal composers to create a feast for the ears. A master of the madrigal was the great Claudio Monteverdi.

Instrumental music was beginning to take equal place to the more dominant vocal music during the early Renaissance. Many of the instrumental works were based on the courtly dances of the time; many of which have their origins in France or Italy. Composers began to pair together a fast and a slower dance piece that eventually developed into suites of pieces that are more familiar perhaps to students of Baroque music.

The need to accompany a dance became less important and the rise of instrumental music had begun. There were many dances that would have been popular during the Renaissance but the ones that became firm favourites amongst the composer of the time were the Pavane, (a stately, processional dance); the Allemande, (a moderate dance in two); the Courante, (a fast, lively dance); the Galliard, (similar to the pavane, in three beats to the bar and lively); and the Gigue (a quick dance with a two-beat feel).

The Renaissance period of music is one of the most important periods of Western Classical Music. It sets in place a vast array of musical conventions that develop into the period of music that followed. Some of the key works to listen to I have added below. 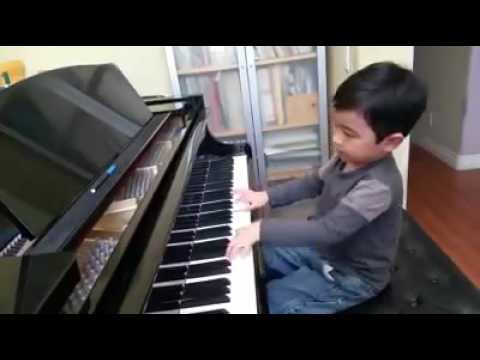 Jordan Smith - Jul 24, 2016
https://www.youtube.com/watch?v=GTYiDiFjTZI Evan Le is a 5-year-old child prodigy who shows off his remarkable talent on the piano in this video. Evan performs the first movement from...

Want to be a pianist without a piano?