It’s perhaps challenging to imagine that an Art form such as music, can be used for propaganda but when you reflect on the inherent power that music possesses you can begin to see why this is the case. Like many Art forms, music has been used by countries and leaders across the world to promote their cause, heat the nationalism, motivate people to hate and war. As terrible as this premise is it has been an unpleasant facet of the world of music for hundreds, if not thousands of years.

If this seems unlikely, consider the Bible story of the Battle of Jericho.  As the text tells us the sheer force produced by a group of trumpets was enough to bring down the wall of the city and allow the army to capture the city. Accounts of approaching armies using drums to keep troops in step and trumpets to announce an attack litter history. What could be more terrifying than hearing an invading army coming ever closer to your city wall with pounding drums that bring a sense of impending doom?

In China opera is thought to date back over a thousand years to the Tang dynasty. ‘Jingju’ or Beijing Opera is such an art form that was hijacked by the Chinese Communist Party as it rose to power in the early decades of the 20th Century. The result was what came to be classed as ‘Revolutionary Opera’, that under the watchful eye of the Mao regime became a vehicle for propaganda. Mao recognized the potential of music and intended for these operas to become an integral component in the revolutionary fight and philosophy. Music could, Mao felt, be used to unite his country, and motivate his armies to destroy the enemies of the people and provide a firm political education.

These revolutionary operas became central to the whole cultural changes that China underwent during this period. The operas toured the entire country and were even made into films that always had revolutionary themes at their heart. With titles like ‘Red Detachment of Women’ and The Red Lantern,’ it is not difficult to see where the focus on the operas lay. A secondary but fully calculated effect was the idolization of Mao and interestingly an opportunity for Mao’s wife to play a significant role in the promotion and participation of these operas.

In Mexico, a form of propaganda music called ‘Narcorrido’ dates back to the early part of the 20th Century. The word means ‘drug-ballad’ and frequently makes use of familiar polka and waltz dance forms. This innocent-sounding three-time music has its roots in the Mexican Revolution of 1910, often extolling the key revolutionary figures of the day and their deeds. One of the key figures was a man called Chalino Sánchez (The King of The Corrido), who was extremely famous throughout Mexico. His music was controversial as he covered topics that were not approved by those in positions of power, including political and social issues and revolution. He was murdered in 1992 and became almost a martyr as a result.

Narcorridos lyrics describe the lives of poverty, destitution, and desperation and glorify those who seek to improve their situation by selling drugs or gain power by any illegal means. As you might expect, the Narcorridos are directly associated with Mexican, Colombian, Bolivian drug cartels creating a kind of sub-culture that surrounds itself in the drug world.

Unfortunately, it is almost impossible to explore propaganda in music without discussing the Second World War. In the case of the Nazi’s, Hitler and his minister of propaganda Goebbels, did their best to rid Germany of all music that was not thought to be strongly Germanic. Hitler wanted to re-build Germany with its cultural heart placed deep in Teutonic legend. The music of Wagner, Beethoven, and Bruckner were distinct favorites of The Führer. Wagner, in particular, took the central position in the culture of The Reich due to Wagner’s anti-Semitic views and his deeply Germanic subject matter for his operas.

Hitler’s dreams for Germanic culture took the physical form of a ‘Chamber of Culture’ or ‘Reichskulturkammer’, whose responsibility it was to put together a pure German cultural model. Any music composed or associated with the Jewish community was banned. What is a frightening thought is that much of the propaganda was carefully aimed at the young members of German society.

The Hitler Youth Movement had an extremely elaborate program of music that was crafted to build the nationalistic feelings and hatred towards Jews, communists, and anyone who did not align with the views of the Reich. ‘The Horst Wessel Song’, was amongst the most popular propaganda song of the time with its subject matter the murder of a Nazi by communists. Even that most loathed group of Nazi’s, the SS had bands that regularly performed patriotic music.

In Russia, under Stalin’s regime, many famous composers had little choice but to tow the Party line. They knew only too well that if they stepped too far away from what they’d been told to do it could mean their death and that of their family and friends. Shostakovich composed a vast amount of music whilst living in this knowledge. His works, notably his symphonies, are rich in their political undertones.

On the surface of it, the 5th Symphony, for example, could sound like a deeply patriotic work full of march-like themes, pathos, and drive. Shostakovich gave much more than this superficial skin to his music and the 5th is no exception. It is a satirical work embroiled in tragedy and fear, that actually ridicules the Stalin regime, a creative decision that could have backfired.

Like Prokofiev, Shostakovich was accused of not composing music for ‘the people’. His work was formalistic and he and other fellow composers were in real danger. The comment came after his opera titled ‘Lady Macbeth of the Mtsensk District’ (1934).

The 7th Symphony ‘Leningrad’ (Op.60) was completed in 1941 whilst the siege of Leningrad raged on about the composer who chose to remain in the city.

Whilst the Symphony makes Shostakovich’s hatred of fascism plain, it beautifully captures the spirit of Russia defiant against terrible odds. Not only did Shostakovich successfully remove the threat of his early demise by writing the symphony he also achieved a poignant testimony of the huge amount of Russian lives lost during the siege and the course of the Second World War. 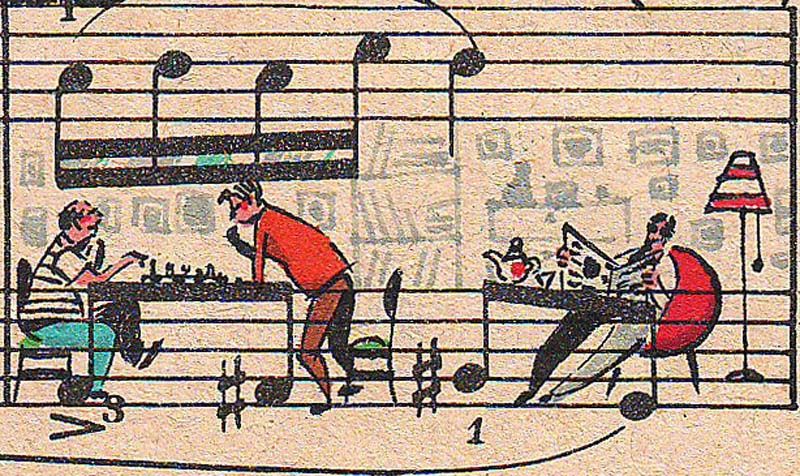 CMUSE - Jul 20, 2014
Art enthusiasts have been using sheet music in their art projects for years and now the trend is catching on. Take a look at...