Music like painting, sculpture, dance, literature and theatre are all vital members of the family we broadly title The Arts. The ‘art’ of musical composition is perhaps often surrounded by more mystery than the other arts. Most people learn to read and write in their native language; some stretch their skills to other languages in turn.

Children learn to explore painting and drawing, dance and acting but musical composition sits quietly in the wings like an unwelcome guest. Performing music is an aspect of the art that is common for children too, often with a focus on practical examinations and instrumental study, but actually composing music is still a rarity. It is an element of music that is often included out of curriculum necessity rather than because of its intrinsic creative value.

The Art of Composing Music

I remember as a child beginning to explore music through playing the piano; where does the music come from? Discovering that there were people who actually spent their lives composing music was a fascinating thought and inspired me to do the same. What was interesting though was the complete dismissal of that ambition by musicians and educators alike. I suspect this is not an isolated or uncommon experience and perpetuates the curiosity that surrounds musical creation.

Maybe I am stretching the idea too far but the countless times I have heard musicians of all levels of experience say they could not possibly compose music goes some way to supporting my claim. Part of the enigmatic quality of musical composition perhaps is what we read about of past composers. There is the stereotypical image of the tortured soul, with wild wiry hair and a fevered brow scratching earnestly at a crumpled scrap of manuscript paper. At times the portrayal is of the artist caught between one world and the next, paralysed by uncontrollable genius, compelled to write the themes of the muses. And, it is this question of where the ideas come from and how they are hammered into human structures that compounds the images we have of the art.

In reality, the art of composing, especially today is one of dull practicality. Composers alive and working today do not sit idly waiting for inspiration to strike but run a business that has deadlines, budgets and clients to keep happy. To an extent, this was also the case for composers in the past who were supported by the aristocracy and the church. The difference is that now there are many more composers vying for the same commission or job that it is even more competitive than before and even harder to make the business work. What this means is that composers have work quickly and to an extremely high standard to have a chance to survive as creative practitioners.

I mention the above in an attempt to demystify the whole image of the composer, past or present, but not to distract from the art, nor the artistry that still dominates this musical landscape. The work of a composer like Mozart, for example, stood out because what he did and the way he did it was unique, daring and in many ways new. He was also a household ‘name’ amongst the ruling classes of the day who were keen to be associated with such a composer of note. It is the uniqueness, the clearly distinguishable ‘sound of Mozart’, that is a testament to his art and in no small part why he was successful. Think of any Bach piece, or work by Beethoven or symphony by Mahler, and I think you will agree.

The same is broadly true in the world of composers today. Those who have risen to the lofty ranks of the ‘A list’, especially in the world of film, are easily recognisable by their ‘sound’. John Williams, Hans Zimmer, Danny Elfman to mention but a few of the top film composers. In the contemporary classical world, Thomas Ades, Pierre Boulez, Messiaen, Reich or John Adams; each audibly unique. To my mind, this is at the very core of the art of composition.

The art of musical composition is far more than simply assembling some notes into an order (or disorder), and adding an interesting title. An example of this music students often finds when they are composing pastiche, modelling Palestrina or Bach. Even if they follow the rules that mark out that style of composition, they often remark that it does not sound like that composer. How is this possible if every rule has been followed and the Chorale is a perfect example of that style? I think it is a little bit like explaining a joke. Once you have the humour vanishes like morning mist on a summers morning. You can pull a composition apart and view it for all its components but there is always something ‘more’ that eludes analysis and capture. This is where the art of the composer resides, just slightly beyond what we are able to categorise and explain.

In a sense, it is similar to some of the very best performances of music that you experience. The ones that make you prompt almost involuntary emotional reactions are the ones that contain that magic ingredient that is much more than just the right notes in the right place. The curious thing is that those performances like the most inspiring compositions, do not affect everyone the same way or at the same time. The art of the composer is in part to weave an invisible thread into the composition that has the potential to spark emotions, thoughts and memories. Using the constructs of music solely to create a composition that is academically justifiable is to miss the art of composition in my opinion. The true art of a composer it to be able to judge within their own individual style how to combine the elements of music in such a way as to imbue them with something more than just their parts. Maybe the art of composition can be paralleled to an excellent meal. Somehow the cook has managed to take the ordinary and create something extraordinary that transcends its origins and becomes something altogether more. 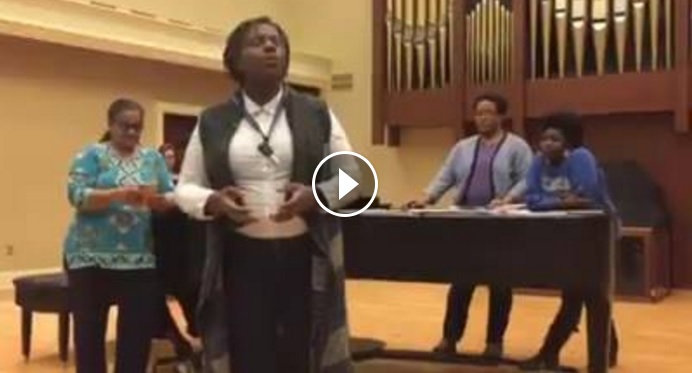 CMUSE - Mar 5, 2017
Everyone is excited about listening to a gospel singer going from bottom D to top A#. Callie Day was practicing ‘Hear My Prayer’ and...

Soprano Does Something Totally Unexpected During Her Performance