Beethoven was a man of his time, aware and interested in the world in which he found himself. Nature was often at the heart of his music, as in the ‘Pastoral’ Symphony but the dedicatee of his third symphony was a major historical figure, Napoleon Bonaparte. Napoleon had impressed Beethoven, a man who I imagine would not easily arrive at this position, and had according to his student Ferdinand Ries, held him in the ‘highest esteem’. Perhaps it was the revolutionary spirit that Beethoven saw in Napoleon or his pursuit of equality and liberty that aligned with Beethoven’s democratic ideals. At this point in history, Napoleon was the First Consul of France, but all this would change in the coming years.

Looking back to Beethoven’s younger years, it appears that he demonstrated a significant interest in the French Revolution and its ideals. At the impressionable age of 19, it is clear through his notes and diaries that Beethoven was attracted to the expressions of secularism, liberty, and almost to the point of militancy. Beethoven was not a genuine supporter of Monarchy or organized religion, a stance that he would hold for the rest of his life.

In early 1802, Beethoven departed from Vienna to find quieter lodgings where he could recuperate, and concentrate on new work. He moved to a small town called Heiligenstadt which was located about five miles north of Vienna. Beethoven’s health was not strong and he was increasingly troubled by his loss of hearing which was leading him deeper into a dark depression. Naturally evolving from Beethoven’s Op.35; Eroica Variations, for solo piano, he embarked upon some sketches of a new theme in Eb major that would eventually grow into one, of the most ground-breaking symphonic works of his age.

The wheels of history turned in a direction that could have been anticipated by Beethoven, and on the 18th of May 1804, Napoleon declared himself Emperor of France. The news traveled to Beethoven via his student Ries, whose account of the composer’s reaction was taken as absolute truth. According to this version of the story, Beethoven was beside himself with rage and strode over to the score of the Eroica and violently scratched out Napoleon’s name from the title page of the symphony. It seems reasonable that Beethoven may well have been disturbed and dismayed by Napoleon’s declaration. Beethoven would in all probability viewed Napoleon’s new stance as contrary to everything he had previously held dear. As good fortune would have it the copy of the symphony in Beethoven’s hand still existed and it is obvious where the composer so fervently removed Napoleon’s name. 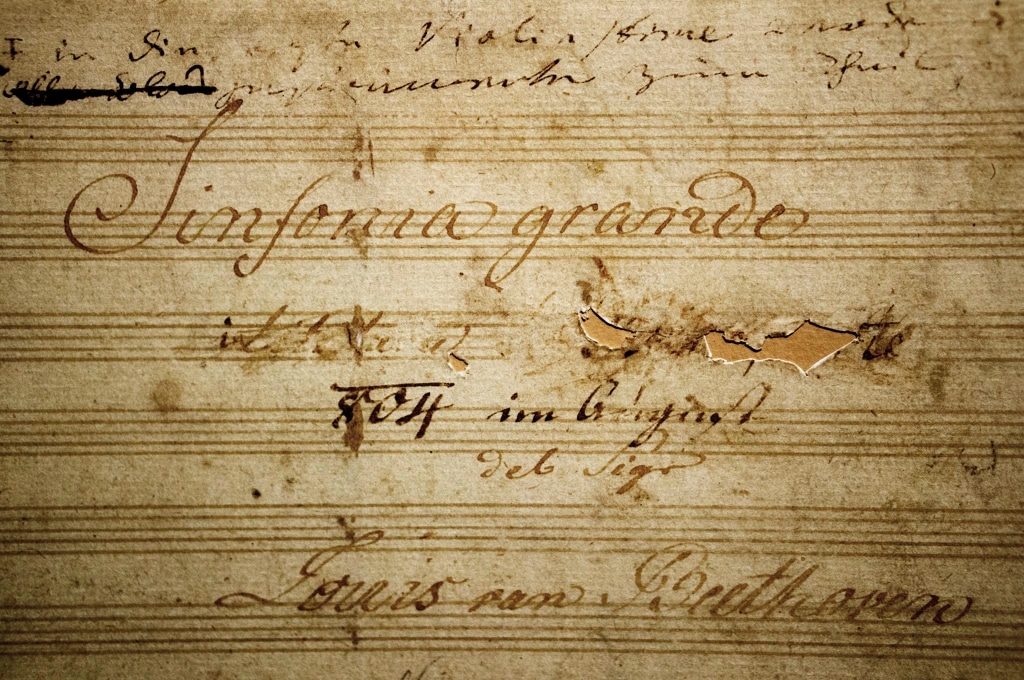 There has, in line with the story from Reis and Anton Schindler,(a close friend of the composer), been an understandable view that Beethoven broke ties with the Bonaparte family thereafter with his respect and admiration for the new Emperor in tatters. In many ways, this image of Beethoven has great appeal and to a certain extent aligns with the popular depiction of Beethoven as a surly, bad-tempered, and passionate man. This is, however, not the complete picture.

The anecdote is a little simplistic. What is key to note is that Beethoven’s links to the Bonaparte family were not as an admirer from afar. Beethoven was in close association with the imperial family and his letters testify to his continued regard for Napoleon in the following years. Napoleon’s brother, Jerome Bonaparte, offered Beethoven the post of Kapellmeister in Kassel in 1808, not a job likely to be presented to a composer who was not held in equally high esteem.

In 1809, Napoleon did push the relationship to an extreme when his armies vanquished the Austrian Army in the War of the 5th Coalition. This places Beethoven in a very difficult political position. If he was seen to support and be an advocate for revolutionary principles and the successes of Napoleon he would risk being cut off from his patronage and his livelihood. From this time forward it would seem that Beethoven, at least in public, voiced his disapproval of Emperor Napoleon.

Before Beethoven had outwardly displayed his contempt for Napoleon, Prince Franz Joseph Lobkowitz had offered Beethoven a generous sum of money (400 ducats), for the Third Symphony. The Prince was a powerful and influential man who had been a patron of Beethoven for many years. Risking the loss of the Prince’s patronage would have been disastrous for Beethoven and it is not difficult to see how the Prince became the dedicatee on the first page of the score rather than Napoleon Bonaparte.

Was Napoleon the inspiration for the Eroica? This is an equal matter for controversy. There has been speculation around whether Jean Bernadotte (Charles XVI John; King of Sweden 1818) may have suggested it to Beethoven. This in itself does not hold water as Bernadotte was a soldier and brigadier general to Napoleon before eventually rising into the nobility to become the King of Sweden. It seems highly unlikely that Bernadotte would have been connected sufficiently to the composer or even had any great interest in his music to have suggested the Third Symphony.

What seems credible is that Beethoven had reached a crisis point in his compositional career. He was looking for ways to push the symphonic form into uncharted territories and change the way we understand that musical form. His belief in the archetypal heroic figure was perhaps embodied by the French revolutionary Napoleon who was fighting for the liberty of the French people against a corrupt monarchy. He exemplified the values to which Beethoven aspired.

The Third Symphony that became simply known as The Eroica, is as daring, innovative, and inspired as Napoleon himself and to that extent, he may have provided some momentum for Beethoven’s music. It is a hugely ambitious symphony with dimensions that Beethoven had not attempted before. The epic nature of The Eroica set in motion the true beginnings of the Romantic Symphony, transforming the tried and tested classical form into something that would form the basis for composers such as Brahms, Mahler, and Schuman.

1 thought on “Controversial History Between Beethoven and Napoleon”