From their low weight, versatility, and affordability, there are many reasons for guitars’ popularity.

They have been used to play songs of every genre, be it heavy metal, classic, or any other genre. They perfectly blend with other instruments and support their tones.

Having said that, any guitarist will tell you that every component of the guitar contributes to its tone.

The bridge is an important component that anchors and elevates the guitar strings so that they can be strummed. It is the point where the strings meet the guitar’s body, and unexpectedly then, it greatly impacts the overall tone.

So, which one offers more features and is worth your money? Today, we will compare both of these bridges in this article.

Comparing the ABR1 vs Nashville Bridge

The ABR1 bridge is manufactured by Gibson, a well-known company specializing in manufacturing top-notch musical instruments and accessories. It is one of the highest-selling bridges by the company and has been used by thousands of musicians

It was the only bridge that was used in all Gibson guitars from 1957 to 1974. Let’s delve further and find out what makes the ABR1 bridge so special.

The new ABR1 is pretty much the same bridge that we see on other Gibson ABR-1 guitars. However, you will notice that it has to be mounted a bit differently. 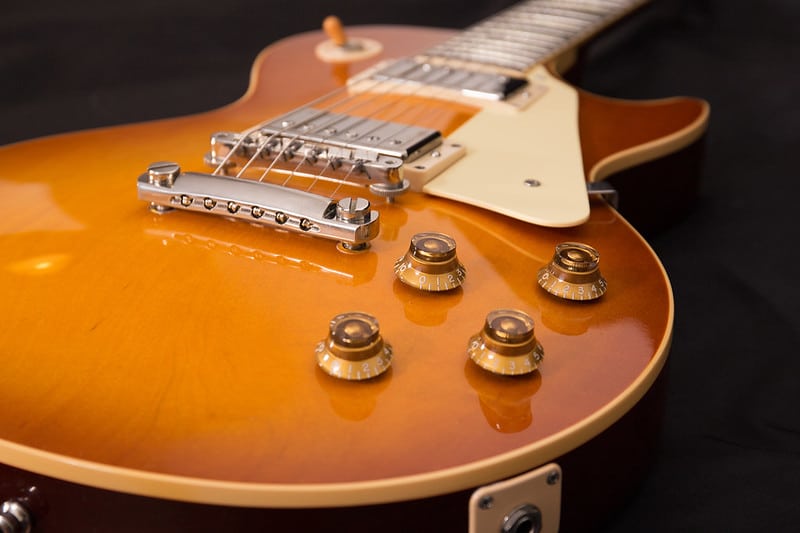 While the older versions came with the threaded bridge posts of 6-32 size that were mounted into the body and had separate thumbwheels, the new ABR1 bridge features integrated bridge posts and wheels.

In addition to that, the body of the new ABR1 bridge features metal bushing, unlike the older versions. It is similar to the bridge systems used in Nashville bridges by Gibson. However, the mount posts are of different diameters.

Another cool thing about the ABR1 guitar bridges is that they have the perfect configuration for knobs and tailpieces, so you won’t have to change your style while using guitars with the ABR1 bridge.

Managing the tailpiece is also more convenient as you no longer need to bring it higher on the guitar.

Now talking about the sound quality, the ABR1 bridge will certainly improve the tone of your guitar. It doesn’t necessarily sound brighter, but you will surely experience a louder sound.

The bottom-end will be a bit tighter, and the top-end will be slightly fatter. You will also notice more clarity and more sustain as soon as you start using the ABR1 bridge.

If you are using it for the first time, you may take a while to get used to it. The ABR1 has low weight, and it won’t add much to the weight of your guitar.

Its stunning design looks great on pretty much every guitar, be it a dreadnought or a folk one. Gibson hasn’t overdone anything, and it looks simple yet beautiful.

It is important to point out that although the ABR1 bridge is made of quality materials, it is seen that the nylon saddles are pretty fragile.

They are not as hard as you see on other bridges, and if not taken care of appropriately, they may break after several months.

Budget-wise, the ABR1 bridge is certainly not the cheapest one in the market. However, it won’t break your wallet, and the amazing tone and construction give you full value for your money.

All in all, the ABR1 guitar bridge by Gibson is a great choice for anyone looking for a well-sounding and aesthetically pleasing bridge at a reasonable price.

If you have done some research on bridges, you must have heard about the Nashville bridge. It is also manufactured by Gibson and is among the most popular guitar bridges by the company.

It was introduced in the late ’70s when Gibson moved to Nashville. It has all the features that you need in a guitar bridge. Let’s take a deeper look at it.

The Nashville bridge happens to be pretty similar to its ABR1 sibling and has been used in more guitars. The major difference between these two bridge models lies in their widths and the mounting process.

You can turn it to move the assembly up or down according to your playing needs.

The Nashville bridge comes with un-notched saddles and several saddle screw retainer clips. It has a wider footing than the ABR1 bridge, which offers a greater intonation range for the best playing experience.

The integrated thumbwheel enables the Nashville bridge to slide smoothly into its place.

The Nashville bridge is an ideal choice for those looking for a bridge with a wider structure for a higher intonation range. It is far more durable than the ABR1 bridge and can last you several years at least.

However, it is pertinent to mention that the Nashville bridge weighs more than the ABR1 bridge. So, bear it in mind when purchasing this bridge.

Another thing to keep in mind when using the Nashville bridge is that you will need to elevate the tailpiece to a bit higher place to adjust to the increased width of this bridge system. That could be a hassle for some users, but for most, it is not.

As far as the performance is concerned, the Nashville bridge is as good as anything. Once you get used to the wider structure, you will love using it. It certainly brings more clarity and brightness to the overall tone of your guitar.

However, it must be pointed out that the Nashville bridge is not for everyone. If a wider structure is not your thing, you may need to look elsewhere.

In terms of design, there is nothing much to talk about. The Nashville bridge has a somewhat plain-looking design, which does not complement the vintage guitars.

This is the main reason why players with vintage guitars opt for some other bridge. If you are concerned about the aesthetics of your guitar and are not willing to compromise on it, consider choosing the ABR1 bridge.

The ABR1 and Nashville are two highly sought-after guitar bridges manufactured by Gibson. While both are good in many areas, they lack in some aspects too. The Nashville bridge offers more durability and has better construction.