A guitar pickup can be referred to as a device that deals with the conversion of vibrations coming from the guitar strings to electrical signals.

The signals need to be boosted at an audible volume, and the guitar amplifier accomplishes the boost job.

Electric guitars and basses consist of a wide range of musical instrument pickups. The nature of the majority of these pickups is magnetic.

Pickups are one of the most crucial elements of the guitar that allows you to pick the better tunes and use the strings in the right manner.

Seymour Duncan is a renowned name in the musical industry. It has got its name for providing state-of-the-art pickups.

Most of these pickups were used to ‘hot-rod’ the guitars. With the rising fame of aftermarket upgrades, the popularity of Seymour Duncan also increased.

Don’t just go on the looks of these pickups. There is much more to them. Seymour includes two of the most popular pickups, Duncan Black Winter and Nazgul.

Although there are no such differences between the two of these, some distinguishing factors do exist.

This article concerns the comparison between Seymour Duncan Black Winter and Nazgul. In this way, you can easily make the decision on choosing the right pickup that efficiently meets your needs.

However, before discussing the differences, it is better to study the individual features and specs of the two pickups.

The creation of Black Winter took place in 2013. The design of the Black Winter was made considering the fact that this pickup would be played by kvlt fanatics and metal players. However, their availability was only in Scandinavia.

But with time, their demand kept increasing, and they became available all around the globe. When you look at the videos of Wes Hauch, one of the greatest guitarists of all time, you can see him using a Black Winter pickup for his guitar.

The Black Winter knows how to live up to the name of Seymour Duncan.

As the design of the Black Winter was specifically made for the extreme metal genres, it is obvious that these pickups are hot.

They are so hot that they can even melt the face. However, as far as their sound is concerned, they sound mid-heavy, and they feature a high end that is pretty harsh.

No matter what lead you play on this pickup, the multiple layers of rhythm guitars will face no issue cutting through them.

Talking about clarity, it is granted by the mid-favored EQ curve. The ideal use of the Black Winter is when the tight bottom is generated as a result of a ceramic magnet and low tuning.

The low end is not too super beefy like the ones in JB or SD Pegasus, but it can produce good chuggy sounds, thanks to its tightness.

When compared with the high end of the rest of the pickups, the Black Winter has an extra high end. Therefore, users need to make significant adjustments to the tone of the amp. That’s how they will feel a balanced tone.

As mentioned earlier, the design of the Black Winter pickup was made particularly for the extreme metal; it can still sound pretty great for the clean and crunchy tones. The bluesy vibe of the neck lets you play jazzy-style riffage as well.

Designed For A Style 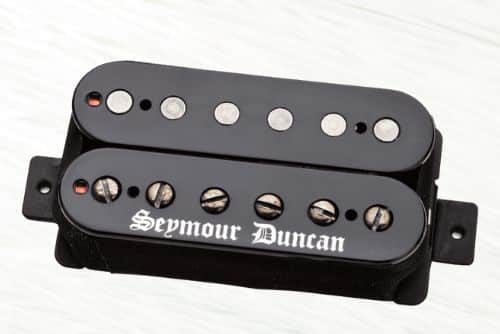 In the simplest terms, the design of the Black Winter was made for anything with a darker feel to it. If you want something subtle, you are not going to get it from the Black Winter.

The name of the pickup itself is pretty evident. There are multiple styles that can be suited with the Black Winter pickup.

The black color represents the menacing sound that the players want from this pickup. The entire pickup is black in color; the bottle plate is black, the poles are black, the screws used for fixation are black, and everything is black.

The old English font with which the Seymour Duncan name is written adds more to the feel of the design. You cannot just resist the styling of the Black Winter.

Instead of Alnico, Ceramic is used as a bar magnet because it is easily available and quite affordable. The sound and flavor associated with it are also pretty good. Four conductors are used in the design.

The great performance of the Black Winter marks it as one of the most reliable output pickups out there. You get the sustain and the output you need. The overwound nature of the coils shows that insanely high amp settings are possible.

If you are a Lord of the Rings fan, you can guess where the name Nazgul has been derived from. The Seymour Duncan Nazgul is such a great pickup that you can take your guitar to the center of the earth with it.

The basic design of Nazgul was limited to 7 and 8-string players. It is also rumored that the deepest of metal tunings require no other pickup but Nazgul.

When you look at the construction of the Seymour Duncan Nazgul, you see that it used a Ceramic magnet and a 13.6 DC resistance. 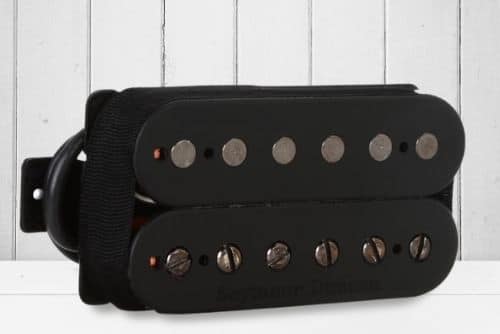 Considering this, a passive pickup like this is too hot for itself. However, it does grant you an aggressive high gain sound and a huge harmonic range.

If you are looking for clean sounds, you may not opt for Nazgul because it creates high gain as a result of its hot nature.

Despite having a huge bottom end, there is still a certain balance to this pickup. The thickness and nicety of the midrange are very appealing.

As far as the highs are concerned, they cut through the mix in a gentle manner. The bass can be a little excessive, but that’s not problematic. Players of jazzy records should not expect clarity from the Seymour Duncan Nazgul pickup.

You must be wondering where this pickup shines the most. Well, there’s an answer for that too. Playing power chords, single-note runs, and extremely low tuned chugging are the aspects where the Nazgul pickup can perform ideally.

The feature that makes Nazgul distinct from the other pickups is that you can effectively control it no matter how extreme the gain is or how low the tuning is.

Because of this feature, chug-heavy styles and heavy metals can benefit the most from this pickup.

However, lovers of versatility should not settle for Seymour Duncan Nazgul. But Nazgul does fulfill the purpose it was designed for intense riffing with a lot of distortion. In simple terms, you can regard Nazgul as a fun yet angry-sounding pickup.

The Seymour Duncan Black Winter pickup has more versatility than it seems. It has got a sweet and bright sound both. On the other hand, the Seymour Duncan Nazgul has got control over the low tuning and extreme gain.