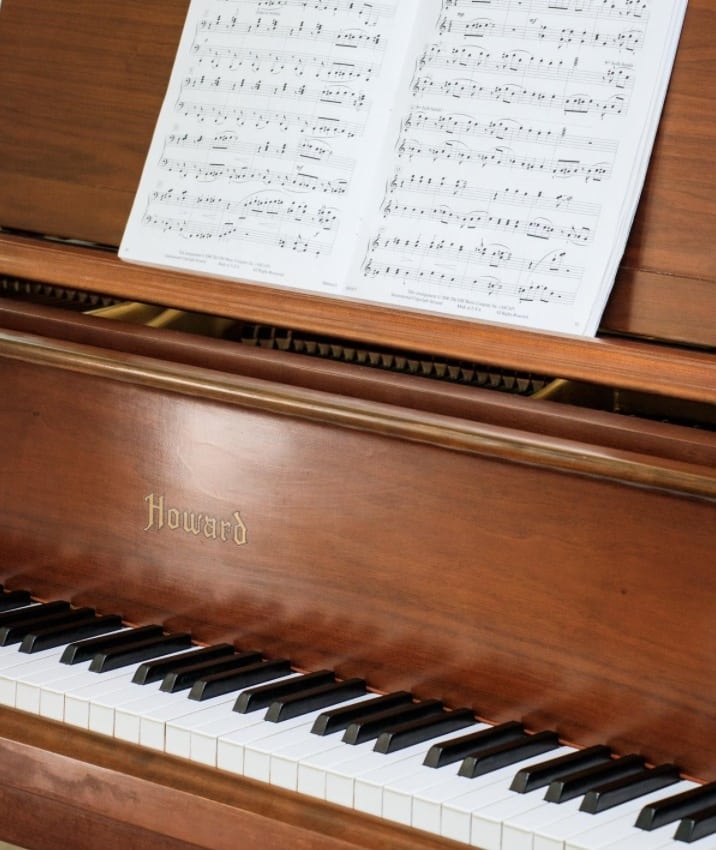 They established themselves as a business in 1895 and sold under the Baldwin umbrella, marketed as a more affordable alternative to Baldwin Pianos. They were, by many accounts, pianos of quality, durability, and distinct timbral color. Baldwin continued to manufacture Howard Pianos until the mid to late 1960s, with both Baldwin and Howard coming under the Gibson Guitar Company these days.

The reputation that Howard established through the Baldwin name largely remains intact today. Even though the Howard name has all but disappeared in the mists of time, there seems to be lasting respect for the instruments that were made. Models of upright and grand Howard pianos were common up until their discontinuation in the 1960s.

What we are considering here is effectively antique instruments that raise all kinds of challenges when writing a review. Equally, if you are in a position of wishing to buy one of these instruments, the feeling across many forums clearly shows that as instruments of quality, it could be worth pursuing this line of inquiry. That said, take advice from a specialist and always play the instrument many times before settling on one.

As good fortune and determined research would have it, I discovered an old brochure for Howard pianos that is now available as a PDF thanks to the advances in technology. This delightful piece of advertising literature sheds some vital light on why these instruments have endured. Listed as some of the reasons why Howard’s pianos are to be a serious consideration when purchasing a piano, they mention the ‘double veneered’ wood casing that adds significant durability to the piano. Howard pianos all have hardwood frames and solid iron plates giving rigidity to the piano and increasing its chances of remaining in tune.

This brochure dated 1929, highlights that the Howard pianos have quite a ‘light’ action making them good instruments for children. Several upright pianos are featured including the 409 (four feet six inches), which combines “strength, beauty, and durability”. The 412 upright came in at a more modest four feet three inches and was available in mahogany and walnut. This model prized itself on fine tone quality and a competitive price. At only three feet seven inches, the 413 was designed with students and schools and colleges firmly in mind. This instrument is purposefully manufactured for durability as well as being responsive to a less experienced touch.

Not only did Howard (Baldwin) manufacture upright and grand pianos, but they were astute enough to realize the demand for ‘player pianos’ that came to light in the early part of the 20th Century. The ‘Howard Manualo’ (Style 477) was the contribution to this growing market that stated in its marketing information that incorporated a “wonderful piano-playing action”.

Howard also claimed that anyone playing the Manualo would have “the ability to play it in the manner of a musician”. This is because the ‘player part’ of the instrument allowed anyone to set the piano roll in motion, choosing speed and other variants, and have the illusion that they were indeed performing music like a professional. It’s easy to see the appeal. Interestingly, these ‘player pianos’ are still coming onto the antique market and in the case of a Howard, Manaulo commanding a price of around $28,000.

An additional delight is the ‘Howard Coin-Operated Piano’ (Style 487). Available in walnut and oak finishes, this instrument became extremely popular in clubs, bars, and other establishments where entertainment was a feature of the services available to the public. This instrument was powered by electricity and sprung to life at the drop of a ‘nickel’ coin into its hidden coffers. According to many accounts, the Coin-Operated Piano had a full-tone but a mellow one and brought five cents profit to the owner for each playing.

Moving towards the more exclusive end of the Howard Piano range (at the time at least) is the baby grand piano called Style 491. This particular model comes with a letter of recommendation from The Woman’s College of Colorado extolling the virtues of this fine-looking piano. The action on this model was reported as “light, easy and responsive” with a tone of “merit”. It was available in several high-quality veneers.

Similar to the player-piano discussed above, the Howard Grands appear to still be available to buy as restored instruments. I came across an example of this from 1931, a ‘Sheraton Double-Leg’ style baby grand with a modest length of four feet eight inches. This beautiful-looking instrument that doubtless had the warm tone and responsive action so frequently mentioned, sold for a handsome $26,000.

Similar in many ways to the Baldwin pianos, the Howard instruments, whether upright or grand are well-made if now antique pianos. There is a large range of Howard Pianos to choose from and according to my searches, a selection of options for all budgets: especially in the US. Like many antique instruments, it can be a minefield to be absolutely certain about what you are buying, and maybe the most sensible pathway, if you want a Howard, is to go through a dealer who has renovated the instrument and may well know its history.

If you can stretch your budget, especially for a grand, then you could find yourself with a very fine, warm-toned, responsive piano that will continue to delight for many years to come. Alternatively, perhaps your preference is for a coin-operated Howard where you can sit back and listen to the sounds of yesteryear for the small price of a single nickel.