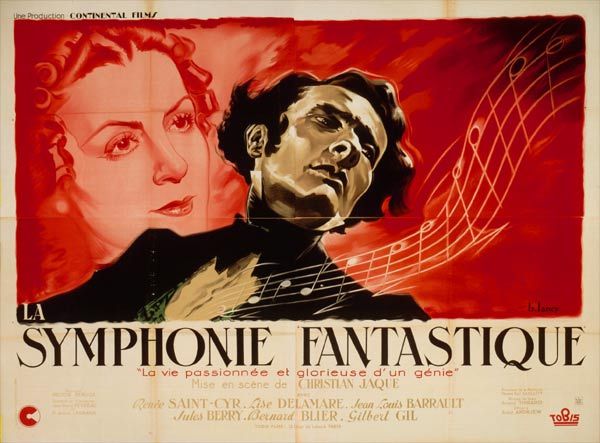 In 1969, Leonard Bernstein presented and conducted “Berlioz takes a trip,” part of the Young People’s concert series.” On that occasion, he discussed and played the most relevant parts of the Symphonie Fantastique by Hector Berlioz. “Pretty spooky stuff. And it’s spooky because those sounds you’re hearing come from the first psychedelic symphony in history, the first musical description ever made of a trip, written one hundred thirty odd years before the Beatles, way back in 1830 by the brilliant French composer Hector Berlioz,” he said after playing the last movement’s intro at the beginning of the program.

His statement was motivated not only the symphony’s dreamlike and hallucinatory nature but also by the fact that Berlioz composed it under the influence of opium.

Divided in five movements, the Symphonie Fantastique tells the story of an artist who struck by hopeless love, poisoned himself with opium. The five parts of the symphony include scenes like “dreams and passions,” “a ball,” and “scenes in the field.” However, the final two movements convey the idea of chaos propelled by psychotropic substances: first comes the march to the scaffold, where the artist, because of his unrequited love, poisons himself with opium and experiences the strangest of visions: he dreams he has killed his beloved, is condemned and witnesses his own funeral.  The final movement, titled “songe d’une nuit du sabbat,” sees sorcerers and monsters gathered for the artist’s funeral, where he eventually falls victim to the hedonistic wishes of witches and monsters.

Honoring Berlioz and his psychedelic masterpiece, which is also one of the most important works of the early Romantic period, here are other “visionary” pieces we have selected.

Holst-Neptune (from the Planet Suite)

The concept of the Planet suite is astrological and each movement is set to convey ideas and emotions associated with the influence of the planets on the psyche. Neptune, in particular, carries the astrological character of the mystic. Among all orchestral pieces, Neptune was the first orchestral piece to have a fade-out ending. Holst had stipulated that the women’s choruses are to be placed in an adjoining room, the door of which is to be left open until the last bar of the piece, when it is to be slowly and silently closed”.

When Le Sacre du Printemps premiered in Paris in 1913, it was met with scathing reviews. “The work of a madman … sheer cacophony,” wrote the composer Puccini. “A laborious and puerile barbarity,” added Le Figaro’s critic, Henri Quittard. A musical-choreographic work, the rite of Spring represents pagan Russia and the mystery of the creative power of spring in the realm of pagan Russia. The celebration begins in the hills where an old woman foretells the future; when young girls arrive from the river, they begin the “Dance of the Abductions” and then they dance the Khorovod. (spring rounds). After people divide and a holy procession leads the elder onstage, the people break into a passionate dance, which sanctifies the unity between man and earth.The second part, “the sacrifice”, sees one of the young girls chosen as a sacrifice. The Rite of Spring ends with the Chosen One dancing the great “Sacrifical Dance” in the presence of the elderly.

The third movement of Debussy’s Nocturnes, Sirens “depicts the sea and its countless rhythms and presently, amongst the waves silvered by the moonlight, is heard the mysterious song of the Sirens as they laugh and pass on,” as Debussy himself explained in the introductory note to Nocturnes. It builds on a two-note motive, which seduces the listener into the composition. In his book on Debussy (Debussy, Paris, 1956) Charles Koechlin wrote: “Sirènes has a subtle charm, and an irresistible and fatal sensuality emerges from the slow vocalises. If its construction appears a little uncertain – especially after the precision of Fêtes – this uncertainness is surely intentional.” Ravel provided the transcription for two pianos.

Originally, Prokofiev wrote the music for the ballet “Ala i Lolli”, which takes place among the Scythinas. The scenario was by Russian poet Segey Gorodetsky and Sergei Diaghilev commissioned the piece, and he ended up rejecting the score even before its completion.As a consequence, Prokofiev reworked the music into a suite intended for concert performance.

The third movement (see video) of the Scythian Suite depicts how the Evil God harms Ala, and the Moon Maidens descend to console her.

The prelude of the Rhinegold, developed over 136 bars, aims to portray the motion of the river Rhine. It begins with a low E flat and builds in more and more elaborate figurations of the chord of E flat major. In My Life, Wagner claims he had a waking dream while in Las Spezia 1853 and that, subsequently,  he realized he had dreamed the Rheingold prelude. At the end of the prelude, the Rhinemaiden Woglinde breaks into a protolinguistic song: Weia! Waga! Woge, du Welle, walle zur Wiege! Wagala weia! Wallala, weiala weia!

In 1927, Respighi traveled to Brazil with his wife Elsa, and, as a result, he composed “Brazilian Impressions,” whose score in the words of Raymond Tuttle, is more “watercolor than paint.”

A sensuous tribute to the Latin sounds of Brazil, Brazilian Impression opens with Notte Tropicale, then the second movement, “Butantan” describes the couple’s visit to a herpetological institutes, where music has an eerily slithering tone and the medieval Dies Irae is quoted. Even in the last section, marked as “Canto e Danza,” Respighi portrays Brazilian culture in a markedly impressionistic way.

Even though Bach’s toccata and fugue is substantially different from the other pieces in the list, we think that animation created for Disney’s Fantasia clarifies its  “psychedelic” potential. it’s an animation piece where abstract patterns, animated lines, shapes and cloud formations are made to reflect the sound and rhythm of the music.