In this article, I am going to take a long hard look at the key differences between what broadly can be described as classical and popular music. This is not to seek to divide genres of music in a destructive manner but simply to investigate both types of music in relation to one another. Perhaps the outcome will be a lively debate.

A starting point may be to initially recognise that classical music can refer to a huge range of music and not only to the Classical era. If we are holding true to this thought then we need at the very least to consider music from the Medieval up to the present day. On the other side of the discussion, popular music as it is understood today really could be thought of as beginning with Blues or Jazz when the availability of music on a global scale became possible through radio and phonograph.

An additional consideration is an implication that popular music is in some way more favoured by the general populous than classical music. In the Century that we are living in, this is generally true, especially if the popularity of a genre is measured in sales of records, radio plays and streaming preferences.

It is worth noting though, that the ‘popular’ music of almost any period of musical history was the music of the time. In other words, up until the advent of blues and jazz, classical music was the popular music of the time. (This is not to ignore folk or indigenous music of any kind).

One key difference is that much of the classical repertoire was composed for societies influential and wealthy classes whereas popular music is written specifically for mass consumption. You need only look at the dedicatees of Beethoven’s, Mozart’s, Haydn’s, works to realise that these composers were composing works to commission from the ruling classes with time, money and in many cases great talent.

If we trace this claim further back to the Renaissance, then again we find that the music of the time, with the exception of the music of travelling musicians, was written with the for rich patrons of the day. Today the distinction is perhaps not so clear. Access to quality music tuition in schools and privately has led to far more young musicians from all backgrounds playing and composing music in ways that no other period in musical history has seen.

Leaving the social aspect of music to one side for a moment, further consideration is one of the structure and focus of classical and popular music. If you take a cross-section of popular music today there is everything available; hip-hop, techno, trance, dubstep, ambient, rap, rock, jazz, blues, R&B and so on.

On a closer analysis what can be seen in Popular music is music that is based primarily on binary (AB) or ternary (ABA) structures. The Jazz Standard is often AABA in form, most songs today are ABA2BA3B where A equals a verse and B the chorus, sometimes with the addition of bridges and pre-choruses. This differs widely from music that comes from the Classical Tradition. Here the range of musical structures or forms is considerably more diverse.

The purpose these structures regularly offer is for the classical composer to develop their material rather than simply state it in the manner in which you find in popular songs. This, in turn, leads to more complex use of the musical ideas in classical music. Where popular music steps closer to this model is in the layering of ostinato patterns, or multiple vocal parts, particularly in the work of artists like Bjork and Eno. This never the less does not constitute development or exploration of music material in the same way as we can hear in classical music.

With the exception of Jazz, the harmonic content of popular music is substantially different from that of classical music. Jazz has since the early 1940’s sort to challenge the harmonic conventions of its earlier exponents. Artists like Ornette Coleman, John Coltrane, Charles Mingus and  Miles Davies to name but a few, have pushed the boundaries of jazz structurally and harmonically to the extent that Classical composers have acknowledged their influence own their own work.

Popular music largely adopts a less challenging approach to harmony. It is tonal, and often highly derivative. Certain chord progressions are deeply ingrained into popular music especially the progression I – V – VI – IV of which there are numerous examples. This is not to trivialise popular music in any way but to point out a difference with classical music. Let’s remember that the purpose of popular music is not to be academic or break with convention, but ultimately to sell records.

Even within the safe tonal sound world of classical music, the variation of harmonic exploration is richly different from popular music. Take as an example a song by Schubert, say “Die Forelle” (Op. 32: D/550) and a song by Bruno Mars, like “Count On Me”. The Mars song has six chords in it and is broadly in AB form. Schubert uses a far greater range of chords although the form is similar to the Mars song. What separates the songs is the use of the instruments and voice.

The Schubert song uses the piano accompaniment conjure the images that the singer sings about creating considerable textural diversity and musical excitement. Bruno Mars uses clever production techniques to vary his verse-chorus song and in spite of a catchy chorus, the song relies on repeated material for its success.

Different as they may be both classical and popular music now exist comfortably beside one another. Audiences these days can seamlessly choose to listen to Chopin one minute and The Back Street Boys next. Maybe the message is simply to be open to all kinds of music and enjoy as much of it as you can. 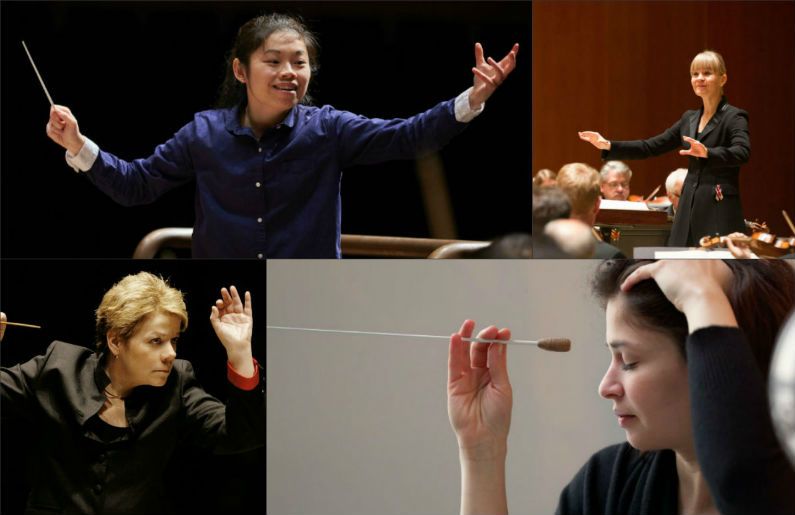 Maureen Holland - Mar 6, 2015
These are words you do not expect to hear from a young, professional conductor in 2013. Yet, the minted maestro of the Oslo Philharmonic,...

This 8 Year Old Girl Singing ‘Queen of the Night’ Seriously...

Can You Name These Classical Composers? Take the Quiz!