When you want to explore the area of guitar tuning and string tension, one of the best things you can get is the Fender Stratocaster which comes with a Tremolo bridge.

The best advantage of a tremolo bridge is that it can be easily adjusted and you can change the tuning and ease the tension in the strings.

This will allow you to play various genres of music at the same time. An added advantage with the Tremolo is that it can provide an extended level of control on your guitar and you can enjoy making music to the fullest.

A Fender Stratocaster guitar is the ultimate electric guitar for guitar enthusiasts, the tremolo bridge allows you to take this experience to greater heights.

The Tremolo feature that you get on your Fender Stratocaster is known to be one of the best features of the guitar. It is simple to use and allows you to make music with complete liberty.

Moving on, you get two systems for the guitar bridge settings on your Fender Stratocaster which are the 2-point and the 6-point systems. There is a massive difference between both these systems although they may look similar but are completely different.

Fender Stratocaster guitars are every guitarist’s dream guitar but when you plan on buying and picking a guitar, you need to analyze and decide which of these two systems will be more useful to you.

Of course, there is a certain kind of music you would want to produce which is why it is important that first, you know the difference between these two systems and which one suits your requirement more.

Both the 2-point and the 6-point Tremolo are great but it entirely depends upon the guitarist’s choice of genres, the difference between both these systems is very minimal yet at the same time plays a significant role when a guitarist has to choose either of the systems.

A few significant differences between these two systems would be: 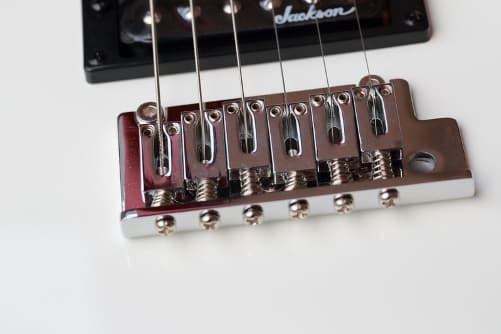 The name itself gives away the meaning of this system. The 2-point Tremolo is a system that can only be adjusted at two particular points. This gives it the edge of being the best bridge to have as it will give you a better and more sustainable tuning.

The bridge in this system is floating which allows you to ensure that you will not have to face the problem of dealing with intonation issues while using this particular system. This floating aspect of the 2-point Tremolo allows the guitarist to play with ease and comfort.

However, the 2-point Tremolo has comparatively less stability because of the 2-point connection and this can be a bothersome thing for you. You need to keep in mind that while playing such a guitar, you will have to be careful with aggressive playing styles such as pop, rock, or blues.

This can be a demotivating factor for some guitarists whereas, it is a blessing in disguise for people who love to play softer genres and play the guitar with ease and comfort and with no pressure.

If you are playing for large crowds, it may not give much of a look but at the same time it will add a minimalistic touch and feel to your guitar and you will be able to perform with ease in any kind of crowd, big or small.

The 2-point Tremolo is mostly preferred and pursued when you are looking for a guitar that can provide you with softer tones and you don’t want any hassle with the intonation or adjustment of the guitar.

In short, the 2-point Tremolo is great for people who want to stick to making soft music as it does not do well with aggressive genres. 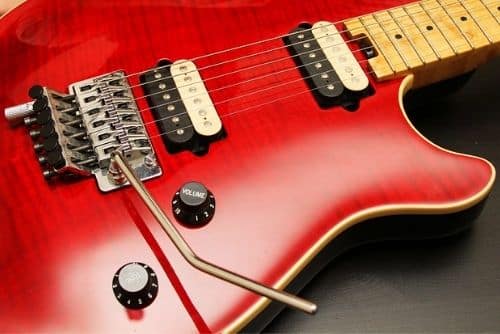 This is a popular system available for the Stratocaster, as this is a bridge system that can be adjusted to up to 6-points for 6 strings.

This gives you the leverage of adjusting all the strings on your guitar and this enables you to have control above anything else along with the intonation on your guitar.

One of the disadvantages of this is, however, the high chances of your guitar getting out of tune and this can cause trouble while trying to tune the guitar.

This system is not for novices but for people who truly understand the system and know how to handle it well. Once, while this system is adjusted correctly, it can take your music to greater heights.

The 6-point system is designed for and used majorly by experienced guitarists, who understand how to control the system without letting their guitars go out of tune.

The controlling aspect of this system is amazing and this 6-point Tremolo system can be used for all kinds of music genres, especially aggressive genres.

This doesn’t mean that you can only play aggressive genres, you can also easily play softer tunes.

This is an added privilege for guitarists who are well-seasoned and experienced to use the system, the 6-point Tremolo does not bound the guitarist to certain genres, unlike the 2-point Tremolo. 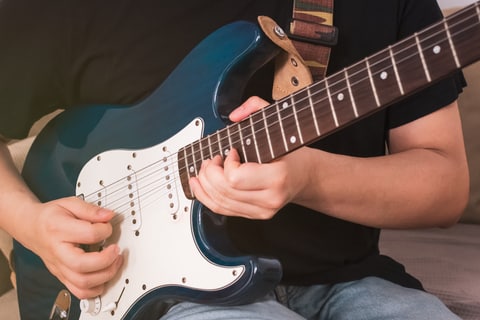 Now, if you want to consider the outlook of the system then it sure looks bulky on the outside but can be managed easily if you are an experienced guitarist who knows how to perform and you know your fingers are well accustomed to the grip of this system.

This will allow you to make and spread music beautifully and soulfully.

As a guitarist, at first, you might feel it is a tricky choice to choose between the 2-point or the 6-point Tremolo system but if you know what sort of genres you are planning to play, then it can be an easy pick.

It is a great system to play classical music on and with the 2-point connection, you do not have to worry about managing a lot of things at once.

But if you are an experienced guitarist and want to pursue making music for all genres, the 6-point Tremolo is the right choice for you.

You will have the liberty to try more combinations and if you think you would be able to deal with the regular tuning of your guitar, then the 6-point Tremolo would be a great addition.

A 2-point Tremolo bridge is relatively easier to set up and it also makes it easy for the guitarist to adjust the guitar’s action in comparison to a 6-point Tremolo.