Certain instruments, as in many forms of music, are generally present in a jazz band or group, giving jazz its distinct sound. Jazz is a popular musical style because of its distinctive sound.

A jazz group’s rhythm section often consists of drums, a double bass or bass guitar, a piano, a keyboard, or even an organ. The keyboard instruments can also be utilized to create melodies.

The “horns” of the melody section are trumpet or cornet, trombone, alto or tenor saxophone, and clarinet. Occasionally, a guitar will be added to the mix.

There are many different jazz band lineups for each type of jazz genre, but the most common lineups are jazz band, swing band, and jazz trio—you can learn more about their setups here.

Sometimes, a vocalist can join the setup and sing songs accompanied by the band.

Jazz singers often use a technique called “scat singing” to improvise on the band’s accompaniment or imitate the instruments in the band. 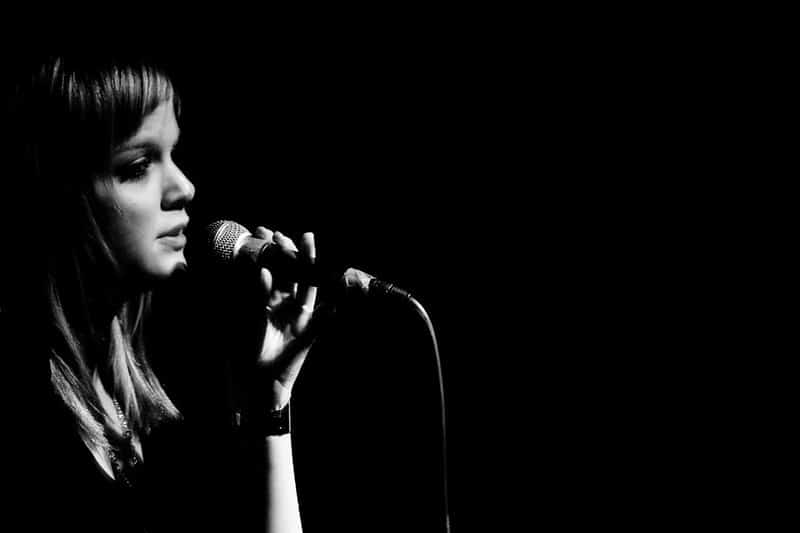 What Instruments Are Used To Play Jazz

Before we look at the most common instruments, we’ll quickly look at the rhythm section and proceed to the individual rhythmic instruments afterward.

The rhythm section can be described as the “backbone” in a jazz setup providing the harmonic and rhythmic backing while driving the music forward.

Primarily, it will be the drums, double bass, piano, and guitar. But, don’t think these instruments remain in the background—sometimes, they are featured prominently during solos.

Many of the most famous jazz musicians are guitarists or pianists and may perform as soloists with their bands.

The bass line can be provided by a double bass—the traditional choice—or a bass guitar. As big as the double bass, it is also the quietest instrument in the jazz band.

Unlike orchestral playing, in jazz, the double bass strings are usually plucked or slapped rather than bowed.

Bass players in the early days of jazz (the 1920s and 1930s) would play slap style pulling the strings to make a slapping sound against the fingerboard to be heard.

Usually, a bass player will play standing up. The electric bass guitar fulfills the same function as the double bass can play more virtuosic bass lines and is better heard because they are amplified.

The piano has been an integral part of the jazz setting because it provided players with rhythmic and harmonic capabilities.

In the early days, the piano fulfilled a rhythmic role by helping the band keep time with repetitive figures in the left hand. 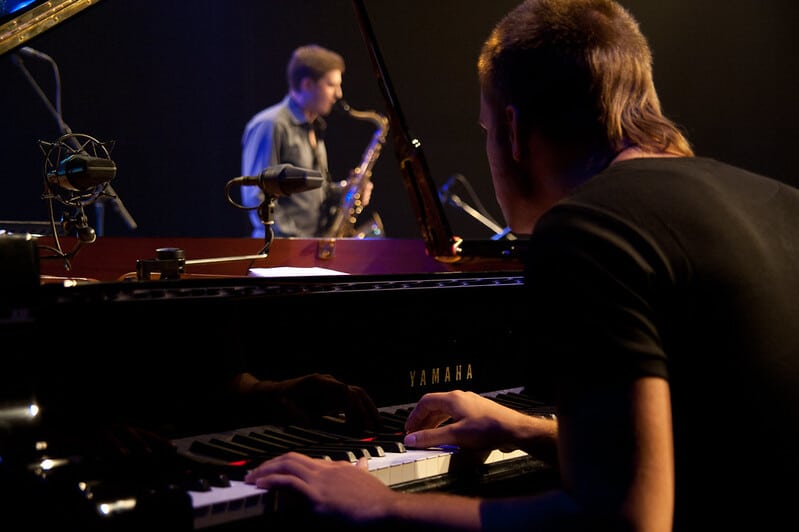 As time progressed, skilled pianists emerged and took the role of “answering” the lead instrument’s melodies as soloists by using a technique called comping: they’d use short melodic and chord fragments from the melody to provide an “answer”.

Electronic pianos also became popular, and the Hammond Organ was quite popular as a keyboard instrument during the 1950s and 1960s.

Because the rhythm and sound of the drums are so fundamental to the cultural past of where jazz music started and grew, the drums have always been a component of jazz.

The drums comprise the jazz ensemble’s rhythm section, and they consist of the bass drum, snare drum, and cymbals.

We’ve looked at the rhythm section, but jazz would be quite boring if there weren’t any melodies, right? Next, we’ll look at the most common melodic instruments used to play jazz.

Although any instrument can play jazz music, the ones below are mostly associated with jazz.

The “horns” comprise the brass (trumpet or cornet and trombone) and woodwind instruments (saxophones and clarinet). They are responsible for playing melodies—improvised and solos—and written music. 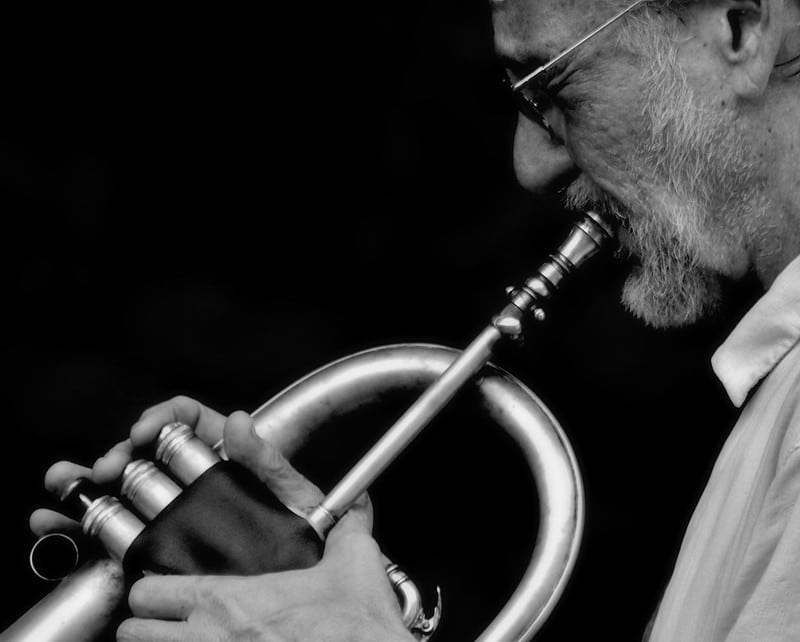 Trumpets (and saxophones which we’ll look at later) are almost synonymous with jazz. Trumpets provide a strong and brilliant sound in the jazz setup (think Louis Armstrong and Miles Davis).

Sometimes, a cornet can provide the same brilliant sound as the trumpet because they have a similar range of notes.

The trombone is perhaps one of a jazz band’s most easily recognized instruments due to its size and theatrical maneuvers.

Initially, it was used as a supporting instrument in Dixieland Jazz, which originated in the early twentieth century in New Orleans.

During the 1930s jazz era, the trombone proverbially stepped out of the shadows and reached its pinnacle in the genre.

Most musicians begin with a Tenor Trombone (typically used mostly in jazz), then progress to a Bass Trombone, B-flat, or F-model if playing more classically.

The saxophone is one of the most well-known and often recognized instruments due to its unique shape and sound. Most people also think of a saxophone when you mention the word jazz.

They come in various sizes, with the alto and tenor saxophones being the two most popular sizes. The saxophone is metal but uses a reed like a clarinet to produce sound. 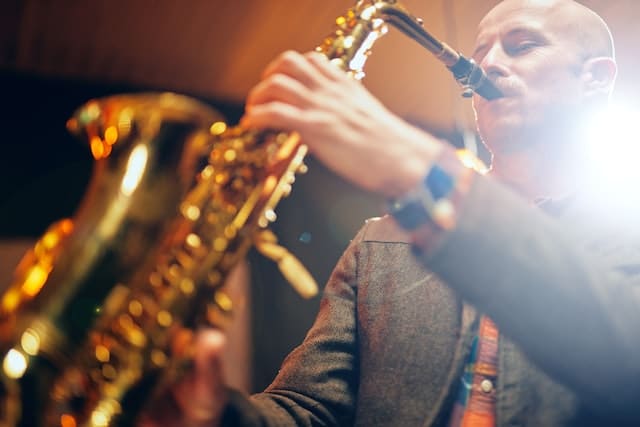 The clarinet may not be as theatrical as the trombone or as easily recognizable as the saxophone. However, it still plays an important role in the jazz setup.

It is a small instrument–professional models are made from African blackwood or ebony. In contrast, student models are usually made from a special type of composite plastic.

Researchers argue the clarinet was instrumental during the developmental stages of jazz in New Orleans before making way for the saxophone during the bebop era. 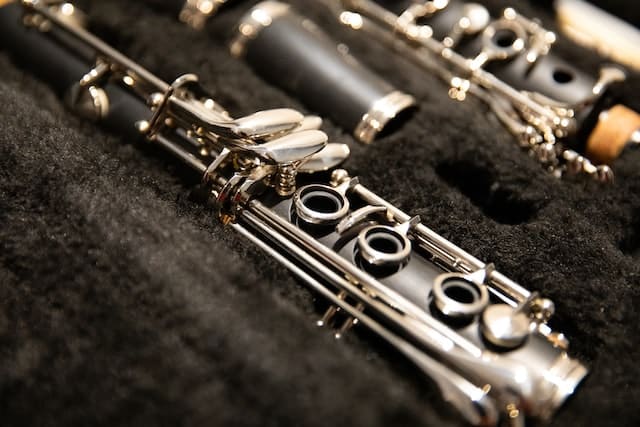 It can fulfill both a rhythmic and solo role in jazz music. However the acoustic guitar was initially used as a rhythmic instrument, but when amplified can also play melodies.