The flute is one of the oldest musical instruments in human history and has had plenty of opportunities to express a wide range of human art. It is found in many forms and in many cultures from both the East and the West and has undergone structural and tonal evolution in the Western world. Here are some beautiful flute pieces; although they may not be simply sad flute pieces, they also are evocative, introspective, and often difficult to perform.

1. Dance of the Blessed Spirits

C.W. Gluck was a composer of the early Classical era and was a important contributor of operas in the French and Italian style of the day. In Gluck’s operatic version of the myth of Orpheus and Eurydice, the piece is played while the protagonist Orpheus is roaming around in the Underworld in search of his lover Eurydice, who had died earlier from a snake bite.

The choreography which accompanies the piece refers to the blessed spirts of the Elysium fields, a peaceful afterlife for the righteous. Of course, the sad and eerie mood of the dance foreshadows the tragic ending of the tale; while Orpheus succeeds in nearly leading Eurydice out of the Underworld, he loses her forever by not following the instructions given to him before making it back to the earth.

2. Sonata in A Minor for Flute Alone

C.P.E. Bach was one of the musical children of Johann Sebastian and the most well-known out of his siblings. His music is considered to be one of the bridges between the Baroque and the Classical period, as his early musical training was influenced by his father Johann Sebastian (as well as his father’s generation) while also embracing the musical transition post-1750. While most of his work revolved around larger-scale groups (e.g. concertos, symphonies) and solo keyboard works, C.P.E. Bach also dabbled in chamber music and solo music.

His Sonata for A Minor for Flute Alone has become a standard piece of flute literature and noticeably takes after his father’s Partita. Both pieces are written in the key of A Minor, and express an affect of sadness that listeners of the Baroque period would have recognized. However, unlike the dances of the Baroque period, C.P.E. Bach’s flute solo aspires structurally, albeit loosely, towards the new sonata form of the Classical era.

Composing from a young age, Carl Reinecke was a German pianist of the Romantic era. He composed in many genres, including opera, symphony, chamber music, and works for organ and piano. However, he is also known for his flute compositions, including the Concerto for Flute and Orchestra Op. 283, the Ballade for Flute and Orchestra Op. 288, and the “Undine” Sonata. This passionate and virtuosic work for flute and piano was based off of the German myth and novella of Romantic-era writer Friedrich de la Motte Fouqué. According to the story, the water nymph (Undine) marries a knight (Huldebrand) in order to gain a soul and live as a human.

A basis of inspiration for Hans Christian Anderson’s The Little Mermaid, Undine loses her former self and transforms into an almost human character throughout the story. However, Huldebrand’s former lover intervenes and attempts to woo him away. Because Undine follows a strict code of honor, she is forced to kill Huldebrand as he chose to reject their marriage by returning to his former lover.

A contemporary of Olivier Messaien, Pierre Sancan was a French composer who also studied at the Paris Conservatoire. He also wrote several other major works for orchestras, ballets, and an opera titled “Ondine.” One of his best-known works in the flute world is the beautifully introspective Sonatine for Flute and Piano. The interplay between the flute and piano is colorful and impressionistic while also full of interesting harmonies and dissonances.

5. Poem for Flute and Piano

Charles Griffes was an American composer and pianist of twentieth century who studied abroad in Berlin. He was influenced by both French impressionism and the exoticist movement, as seen in the Asian and Russian styles he incorporated in some of his works.

While Charles Griffes created several works for voice, piano, and the stage, he passed away at the age of 35 in New York City from the flu pandemic. The melody of Griffes’ poem for flute and piano (also written as a flute concerto with full orchestra) is hauntingly beautiful, accompanied by soft yet colorful textures from the collaborating musician(s).

6. Duo for Flute and Piano

While Aaron Copland is known for Appalachian Spring as well other ballets, he composed numerous works in voice, chamber music, film, and for the stage. Having studied in Paris with Nadia Boulanger, Copland was influenced by the French school and other notable international traditions. The piece has the “American nostalgia” felt in Copland’s music but also covers a wide range of colors, dynamics, and emotions.

A Wisconsin native, American composer Kent Kennan studied at several prestigious music schools, including the Eastman School of Music, the University of Michigan, and the American Academy in Rome. Every major orchestra in the United States has performed his “Night Soliloquy” for flute and orchestra. The piece is also performed as a duo between flute and piano, and is reminiscent of its namesake as heard in its mysterious musical character.

8. Partita in A Minor for Solo Flute

The development of the new transverse flute in the Baroque period gave Bach a wider range of notes to compose with. Bach wrote several sonatas for the flute to be accompanied by the harpsichord.

One of the earliest and prominent works for flute alone during the Baroque period, J.S. Bach’s partita is divided into four Baroque-style dances: Allemande, Courante, Sarabande, and Bouree Angloise. Although the modern instrument has evolved from its larger (and somewhat clumsier) predecessor, the piece is still performed today on both the early and the contemporary instrument. 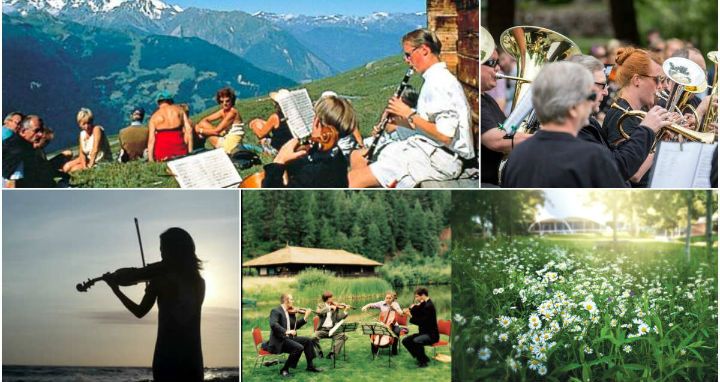 Where Will You Be Heading This Summer? Check Our Selective List...

CMUSE - Jul 20, 2014
Attending a summer camp festival can be one of the most rewarding, exciting and memorable experiences of your life! It’s not only good for...

4 Famous Baroque Music Pieces You Should Listen To