Aaron Copland (1900 – 1990) was a versatile composer famed for writing for a number of genres. However, this American legend is best known for creating a distinctly American sound in orchestral music. It is because of his contribution as a composer and conductor that American classical music gained popular appeal on the world stage.

His work was so instrumental to America’s history that it was used often to raise the morale of American soldiers during the beginning of the Second World War. To honour his immense contribution to American music, here are 10 interesting facts about the composer Aaron Copland:

Copland’s compositions were characteristically filled with American qualities such as jazz rhythms, which is why he is widely regarded as the Dean of American composers. Until Copland joined the musical scene in the 1920s, not many people across the world had heard of American classical music.

Although there had been other classical composers that came and succeeded before him such as Amy Beach and Horatio Parker, the music they created was fashioned after European romantic components. It was Copland who devised a sound that could be identified as purely American.

Copland did not always want to become a composer until he attended a recital where he saw Polish pianist and composer Paderewski performing in 1915. He was only 15 at the time. It was after the recital that Copland set his sights on becoming a well-known composer. During his early musical training, his mother, who was also a singer and pianist prescribed a varied dose of music including orchestral concerts, ballet, and opera, in addition to his violin and piano lessons.

Of all the musical geniuses that came before him, Copland was most fascinated by Igor Stravinsky. In many ways, before Copland found a sound that was uniquely his, he would model a lot of elements that you would find in Stravinsky’s music such as the rhythm and vitality. Copland was especially fond of the way Stravinsky would make his rhythms jagged, and his bold use of dissonance in his compositions.

Between 1921 and 1924, Copland spent some time in France under the tutelage of Nadia Boulanger. After his studies in Paris, Copeland returned home to America determined to place American classical music on the map. Sadly, his first show in Boston, where Copland introduced his unique fusion of jazz and classical music, was an utter flop. The audience even went a step further to claim that Copland had colluded with the conductor to prove to audiences just how bad American music was.

After his return from France, Copland and a few other contemporary composers of that period formed a group that they named the commando unit. The members of the commando unit included Virgil Thomson, Roger Sessions, Walter Piston and Roy Harris. This circle of musical friends supported each other during the initial stages of their careers by attending each other’s concerts and performances.

Although Copland had already started receiving recognition in the American musical circles for Billy The Kid in 1938 and Rodeo in 1942, it was the Appalachian Spring in early 1934 that really skyrocketed his fame and name. Following the request of Martha Graham to compose the Appalachian Spring, Copland found himself on the verge of international acclaim. The original chamber version of the ballet won the New York Critics’ Circle Award (1945) and Copland’s full symphony orchestra arrangement received the coveted Pulitzer Prize for Music.

By 1939, Copland had already started occupying himself with other fields of creativity including films and public radio. He had written film scores for a number of top-level movies such as Our Town in 1940, The North Star in 1943 and Of Mice and Men in 1939. In 1950, Copland even won an Academy Award for the Heiress. He had also written two bestsellers What To Listen For In Music (1939) and Our New Music (1941) and was touring the world as a lecturer and educator. Eventually, these activities led him to take conducting more seriously.

Between 1936 and 1945, Copland used his socialist/communist ideologies to help him write and find a new audience. Some of the works that were created during this time included El Salon Mexico (1936), Saga of the Prairie (‘37), Fanfare for the Common Man (1945), and A Lincoln Portrait (1942).

Lincoln Portrait was excluded from Dwight Eisenhower’s presidential inauguration because it was suspected that it was too communist in nature. Because of his ideologies, Copland was also summoned to a closed hearing of the Congressional subcommittee in 1953 where he denied any associations or dealings with communists.

Although Copland kept his personal affairs private, he made special care not to hide his sexuality at a time when it was still largely unaccepted by society. Copland lived as a proud gay man for the duration of his career and was even involved in an on-off relationship with photographer boyfriend Victor Kraft during the 1930s. 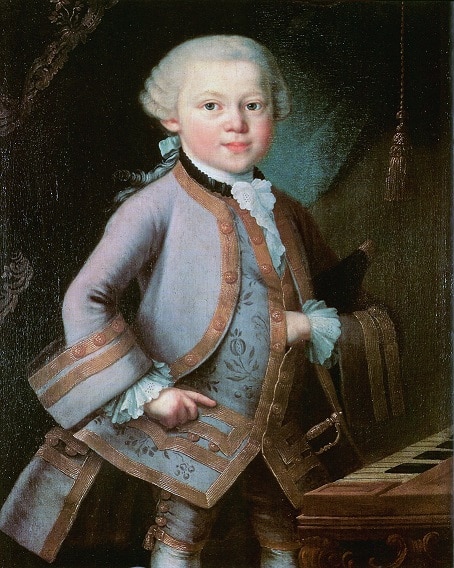 Mozart as a child (Mozart’s childhood)