Many instruments make up the family called woodwind, from the humble recorder through to the extrovert saxophone. These instruments have a fascinating history that details their unique evolution and to an extent explains why they are the way they are today.

In the orchestral setting the woodwind family is commonly represented by the flutes at the top end of the pitch range followed shortly by the oboes, then clarinets, and then bassoons at the lower end of the scale.

In between these familiar instruments, we have more exotic additions that have played significant roles in music since the later parts of the 20th century. These include instruments like the English Horn or Cor Anglais as it is often referred to, the piccolo, alto flute, bass, and contrabass clarinets, and the contra-bassoon.

Some of the woodwind instruments produce their sound from the vibration of single or double reeds; others like the flute simply have a hole in the head of the instrument that produces the tone.

Both the oboe and the English horn are what are considered to be double-reed instruments. Unlike their fellow woodwind instruments, they make their sound using two reeds that are bound together. In between these reeds is a narrow opening that allows the player to blow air sufficient to cause the reeds to vibrate and create sound.

It is the double reed that characterizes the individual timbres of the oboe and the English horn. These double reeds are fixed into a small metal tube (often made of brass), that is surrounded by cork. This is then placed into the neck of the English horn or the oboe with the help of some cork grease to ensure an adequate seal is made. The movement in and out of the top joint of the oboe or cor anglais is one method of tuning both instruments.

Oboe and English horn have been mistaken for one another both through a glance and also by sound. To look at the oboe, you have a straight, usually ebony body with silver keys. It has a small bell at the opposite end of the reed. This is where you can visibly notice the first difference between the two instruments.

The English horn has a noticeably more pronounced bell at the far end of it and its reed housing, (or crook) is slightly bent to facilitate ease of playing. Besides, the English horn is quite considerably longer than the oboe as its range of notes lower than its companion.

Oboes are ‘concert pitch’ instruments that do not transpose. In other words, if an oboe plays the note ‘D’ it sounds like a ‘D’. The same is true for instruments like flutes, the whole string family, and some of the brass instruments. Transposing orchestral instruments include the cor anglais that is pitched a fifth lower than the oboe. This darkens its timbre and makes it appealing to composers who want that double reed tonal quality, but perhaps need lower richer notes.

Without delving too far into the complexities of transposing instruments, what this means is that if an English horn plays a written ‘C’ the sounding pitch is an ‘F’. The fingerings for both instruments are pretty much the same with but the resulting sound is distinct.

Not only do the timbres of the oboe and English horn differ but as you would imagine, their range does too. The oboe customarily covers the notes from B flat 3 right up to A6. At the extreme end of this range, the notes can become quite piercing, and maneuvering between them quickly a challenge for any player.

Unlike the oboe, the cor anglais does not usually have a low B flat. This makes its ‘written’ range very similar to the oboe, but the sounding range different. The English horn reaches down to the wonderfully brooding E3 and stretches to a less popular C6 on a good day. It is not a note you are likely to hear played very often as composers favor the lower end of the English horn’s range.

Tracking back through instrumental history, it is not challenging to discover the origins of instruments like the oboe and the cor anglais. As far back as Ancient Greek times, double reed instruments were dominant in the artistic culture. It was considered at the time a mark of high social rank if you were a consummate performer on the tibia or the aulos; both precursors to the oboe of today.

As we step forward in musical time to the Medieval period we encounter the shawm. This title referred not only to a single instrument but a range of instruments that used both double and single reeds to produce their sound. If you have the opportunity, look further into these fascinating woodwind instruments and you will uncover a huge range of shawms that could play an impressive compass of notes.

As is customary throughout musical history, the composers make increasing musical demands on existing instruments through their work causes these instruments to evolve and become more sophisticated. The 17th Century witnessed a huge time of development in The Arts and musical instruments were no exception. In this period of time, we discover the hautboy or hautbois, pitched like the oboe in ‘C’ (concert pitch). It is widely accepted that the hautbois derived directly from the treble shawm and closely resembled the instrument we know as the oboe.

The popularity of the hautbois grew and it became an established instrument in early orchestras. As the 18th Century advanced, the hautbois evolved through the skilled hands of instrument makers such as Christophe Delusse, Thomas Lot, and Charles Bizey to be ever closer to today’s oboe. The story doesn’t conclude there as further changes were made to the key work and the bore of the instrument making it a flexible and reliable orchestral and solo instrument.

By contrast, the cor anglais is a later development. The reasons for the ‘English’ in its title is not apparent, but the earliest English horns are thought to have emerged around 1720, gradually undergoing similar changes to that of its brother, the oboe. Both instruments are now fully established as solo instruments in their own right alongside valued members of ensembles and orchestras across the world. 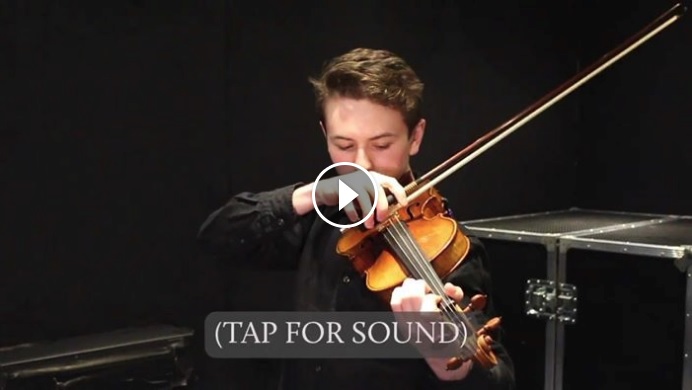 CMUSE - Mar 25, 2017
This Stradivarius violin is the violin that has dates ranging back to 1684. This violin has been on the table for the auction this month...