Stories of child prodigies in the classical genre have a long history, going back to some of the greatest composers in the 18th and 19th centuries. As well as Mozart, undoubtedly the most famous young talent, several other renowned composers got an early start in their musical career, including Beethoven, Chopin, Liszt and Mendelssohn to mention just a few.

The phenomenon is by no means confined to the past. If anything, recent years have witnessed a growing number of children showing off their musical abilities, and not only in classical music. New ways have emerged for younger performers to reach a wide audience, such as the BBC’s young musician of the year awards run in Britain.

Particularly given the gruelling challenges thrown up by the modern music industry, the impact that a professional career can have on children at such a young age continues to be a subject for debate. Even some musicians who began as child prodigies themselves have spoken out about the problems it can bring.

But on the other hand, it would seem unfair to restrict talented musicians from reaching their full potential. Here are ten childhood prodigies who did just that.

Chopin gave his first piano concert in Warsaw when he was seven, while at the same time composing his first pieces. His earliest surviving manuscript is from 1821 when he was eleven. As a child performer, he was popular among the aristocracy in Warsaw, including grand duke Constantine of Russian Poland.

According to a hand-written history of Bellini’s early life, he was capable of singing an aria at eighteen months old. He began studying music theory at two and was playing the piano the following year. He went on to produce his first compositions when he was six.

Milanollo was born into a poor family and played concerts in several European countries, including Italy, England, and the Netherlands by the time she was ten. During her childhood, she also performed with Johan Strauss. She taught her younger sister Maria to play too, and she also emerged as a child prodigy.

Bizet was accepted at the Conservatoire de Paris at the age of nine even though it generally applied a minimum age limit of ten. He came from a family of musicians, with both his mother and father talented in their own right. Bizet won several awards during his time at the Conservatoire, including the Prix de Rome.

At four, he received his first lessons from his mother, and by aged thirteen he was accepted to study at the St Petersburg Conservatory, where he spent ten years. He produced his first compositions at five. By his early 20s, he had already established his reputation as an extremely talented pianist.

Barber began learning the piano at six and his first composition came a year later, a piano solo piece entitled Sadness. He wrote to his mother when he was nine, “I was meant to be a composer, and will be I’m sure. I’ll ask you one more thing.—Don’t ask me to try to forget this unpleasant thing and go play football.—Please—Sometimes I’ve been worrying about this so much that it makes me mad (not very).”

Born in Argentina, Barenboim gave his first public piano concert at aged eight in 1950. He went on to become a chief conductor at the Paris Orchestra at aged 33. He has served since 1992 as general music director at the state opera in Berlin.

Du Pré began cello lessons when she was five and excelled at music schools in London over subsequent years. Her performing career, and ultimately her life, was tragically cut short by multiple sclerosis.

The famous German violinist began lessons at five, and at thirteen played a major public concert in Salzburg conducted by the renowned Herbert von Karajan. Here, somewhat later, she performs a Brahms violin sonata in A major. 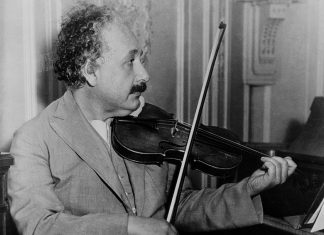 Dr Justin Wildridge - Dec 28, 2017
Many of us are very familiar with the equation E=MC2 and the many pictures of the wild-haired scientist who created it, but what do you...