A large number of companies are dealing with the manufacturing of quality audio engineering equipment and devices. Taking a look at the list of such companies, AMS NEVE is one such brand that stands on the top, thanks to its remarkable products.

NEVE Electronics and AMS (Advanced Music Systems) collaborated in 1992 to make AMS NEVE, an audio engineering company that dealt with digital and analogue music consoles, related equipment and much more.

Rupert Neve is called a pioneer of audio engineering equipment. Back then, plenty of recording technicians and professional musicians used to get their audio mixing and analogue recording equipment from Rupert.

The company of Rupert Neve Designs was established in 2005 by Neve himself. This company manufactured all kinds of equalizers, microphone amplifiers, compressors and a bunch of other recording equipment.

Their products were so innovative that they led to the company winning multiple awards. In this article, we will discuss the differences between the AMS Neve and Rupert Neve products.

Ever since Rupert Neve was a kid, he was always intrigued by radio receivers and audio amplifiers. He started making their designs at age 13. Not only that, he repaired and sold radios during the start of World War 2.

He laid the foundation of Neve electronics in 1961, and that’s where he initiated his work on the designs and build-up of the mixing consoles.

There is a large variety of equipment manufactured by Rupert Neve before his company got merged with the AMS. The reputation of pro audio is incomplete without mentioning Rupert Neve.

Of all the Neve products, the mic preamp from the 1073 module was imitated the most. There is no doubt in the fact that all the RND’s products are reliable and dignified.

None of them has been copied even in their tiniest detail. Instead, there is the incorporation of new thinking in every design.

Talking about the Rupert Neve 511 preamp, it is a perfect amalgam of the flexibility of texture and classic sonics. It is a preamp with a high pass filter and the function that they call silk. It adds silk to the signal.

In simple words, the silk is a harmonic distortion that is quite pleasing, and it adds character to the signal.

Just like that, the Shelford channel is a completely new design from Rupert Neve that is based on the transformer input transformer outputs, built-in EQ and built-in compression.

The Shelford Channel has a lot of great features, not least of which is incredible sound quality. This channel is divided into four sections, the input section, the EQ section, the compressor section and the output section.

Whether it is colour choices or the controls, indicators or buttons, everything has been worked on absolutely perfectly. The ease of use accompanied by the clean-looking aesthetic is a cherry on the top.

Experts have regarded the Shelford channel as one of Neve’s greatest hits. There is a certain truth and reality associated with the sound that comes from this channel.

The harmonic colouration is equipped with richness and intangibility. The blue saturation and the light compression go ahead in hand in improving the connection to the song, lyrics and the singer.

No matter what the genre is, Rupert Neve products know how to give the right sound to the records. The tenure of their design experience of Neve has surpassed 80 years. The digital world has witnessed an absolute revolution with Neve.

AMS Neve is one of the top audio engineering companies in the world. It deals with the production consoles, digital outboard equipment, music consoles, master controllers and much more.

It has its headquarters in the United Kingdom, Lancashire and Burnley. The lifetime of their consoles is known to be around two to three decades, thanks to their exceptional build quality and construction.

Any audio engineer or musician with musical needs can totally rely on the AMS Neve consoles. There has been a great transformation in the AMS Neve over time. Every product manufactured by them is notable.

They have contributed a lot to making a better world of music which led to them winning Emmy, Oscar and Technical Grammy Awards. The features of their products are unmatched in every manner.

Most of the artists in the 1970s and 80s had their instruments and recordings via a Neve 1073. The good news is that now you can have that within the 500 series format.

The manufacture of the Neve 1073 LB takes place in Great Britain, and it is made sure that it matches the exact specs of the basic 1073 preamp.

It won’t be wrong to state that 1073 LB reminds of the classic Neve glory, and the credit goes to its hand-wound input and output transformers.

8424 console is yet another AMS Neve product that is particularly made for hybrid studios. The best thing about this product is that it comes with Neve’s famous Marinair transformers. 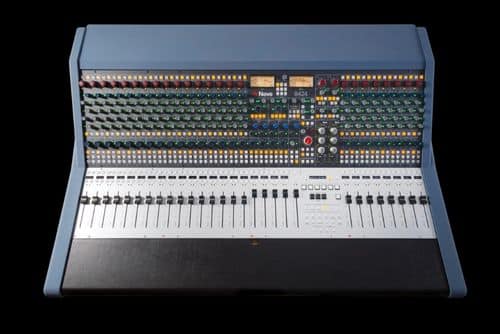 The use of voltage mixing topology adds more to its performance. Not only that, but it also delivers an exceptional frequency response, immersive stereo imaging and transparent dynamics.

There are two Class-A DI’s and two 1073 preamps in the centre section of this console. Whenever you have to mix or master the sounds, the stereo width feature gives you great help.

There is no way you could run out of I/O for the mix sessions because of the 52 out of 76 line inputs which you can mix simultaneously.

While using this console, you are in complete control over the session because of the large format features that come with this product.

You can easily use this console in any kind of setup because of its versatile monitoring options, including dual headphone outputs, three loudspeaker outputs, and expansive metering.

Both the AMS Neve and the Rupert Neve are excellent choices for people who want more control over their sound. Both are phenomenal audio engineering companies that make excellent products, so it’s mainly a matter of preference.