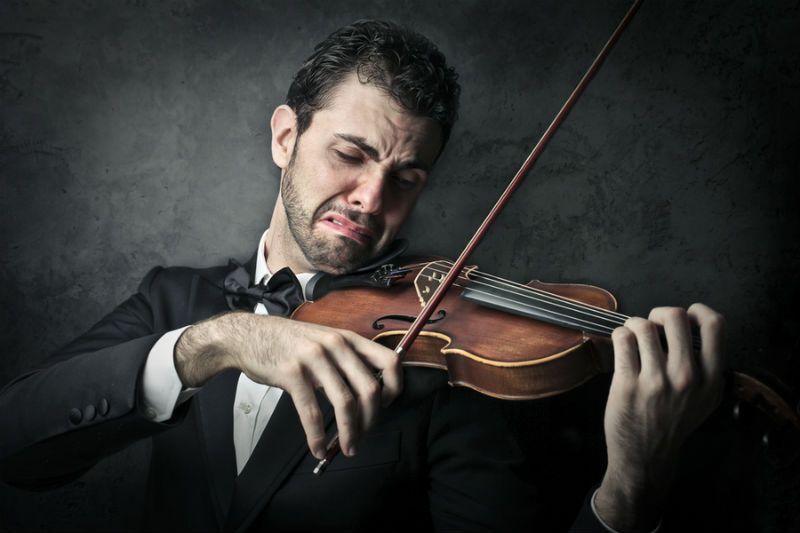 Provided that sadness is an emotion we generally try to avoid, why do we even listen to sad music and enjoy it? According to the idea of catharsis, as theorized by Aristotle, being overwhelmed with an undesirable emotion results in a “controlled purification” from such negative feelings.

What’s more, the so-called “sadness” connected to artistic appreciation is not the same sadness people experience in real, everyday life. A 2013 experiment and study published in Frontiers in Psychology which rests on the dichotomy between real and perceived emotion, demonstrates that, while sad music was perceived as tragic, the experience of the participants resulted in romantic, blithe and less tragic emotions. Another recent study explores the rewards connected to sad music, namely reward of imagination, emotion regulation, empathy, and no “real-life” implications.

Here is a selection of heart-wrenching—yet cathartic— pieces.

Tchaikovsky’s compositions are notable for having an underlying element of sadness–just think of Swan Lake’s haunting main theme–and the Pathétique is emblematic in that: in fact, it was dedicated to his nephew, with whom he was in a secret relationship. The first movement is allegro non-troppo, the second is allegro con grazia, the third is allegro molto vivace and the finale is adagio lamentoso, andante. It should be noted, however, that the name Pathétique is the French translation of the Russian Патетическая (Pateticheskaya), which means “passionate, emotional,” similar to the German leidenschaftlich, not “arousing pity” Fun fact: when the Pathétique premiered on October 16th, 1893, an 11-year-old student was among the audience. His name was Igor Stravinskij.

To put it in Wagner’s own words, this prelude shows that there is “henceforth no end to the yearning, longing, rapture, and misery of love: world, power, fame, honor, chivalry, loyalty, and friendship, scattered like an insubstantial dream; one thing alone left living: longing, longing unquenchable, desire forever renewing itself, craving and languishing; one sole redemption: death, surcease of being, the sleep that knows no waking!” The prelude immediately gives us a feeling of the famous Tristan Chord, which contains two dissonances. Those create within the listener a double desire, agonizing in its intensity, for resolution. However, the chord to which it then moves resolves one of these dissonances but not the other. This lack of musical resolution parallels the longing agony that Tristan and Isolde suffer in their non-consummated desire.

Music critic William Mann defined the second movement of Beethoven’s seventh symphony “heart-rending”, and the repetition of the same note emphasizes the inevitability of time. However, the tempo is not strictly funereal, and thus, it avoids direct sorrow but suggests an active melancholy.

Written between 1907 and 1908, this work was composed during the most painful period of Mahler’s life: first, anti-semitism forced him to resign as director of the Vienna Court Opera, then his eldest daughter Maria died from Scarlet fever and then he was diagnosed with a congenital heart defect. The following year, Hans Bethge’s Die Chinesische Flöte was published, and it contained german translations of ancient Chinese poetry: while reading it, Mahler experienced visions of earthly beauty and transience. Seven of those poems were thus set to music

This absolutely heart-wrenching adagio is played during funerals and events of a great tragedy: those include, FDR’s Funeral, 9/11, Grace Kelly’s funeral, Einstein’s funeral and also when the TV broadcast the news of J.F. Kennedy’s death. Most recently, it was played in Trafalgar Square to commemorate the victims of the terroristic attack at Charlie Hebdo.

This composition by Richard Strauss, subtitled in memoriam, was scored for ten violins, five violas, five cellos, and three double basses. Composed from August 1944 to March 1945, this piece is believed to be an elegy for the destruction of Germany during World War II, especially for the bombing of Munich. A 1990 study, however, determined that Metamorphosen has to be interpreted as a philosophical Goethean study of the underlying cause of war in general—namely. human bestiality. Strauss employs the classical concept of metamorphosis as a means of descent into bestiality. The bass part quotes several bars of the funeral march theme of Beethoven’s Heroic symphony.

The Isle of the dead by Rachmaninoff is regarded as the quintessential expression of the composer’s melancholy. He was inspired by a painting by Swiss Artist Arnold Böcklin: such painting depicts a solitary island surrounded by a barricade of stones, and a black-clad helmsman operates a boat in the distance, which carries white-clad, ghostlike passengers. In fact, the cellos and the harp at the beginning of the composition suggest the rhythmic movement of the dark waters surrounding the isle. Throughout the piece which has its “climatic” moments, Rachmaninoff hints at the Dies Irae theme.

No matter what I am doing, as soon as the chorus erupts in “Arpa d’or dei fatidici vati/perché muta dal salice pendi” I shed a tear.

Can you name your “favourite” tearjerkers?