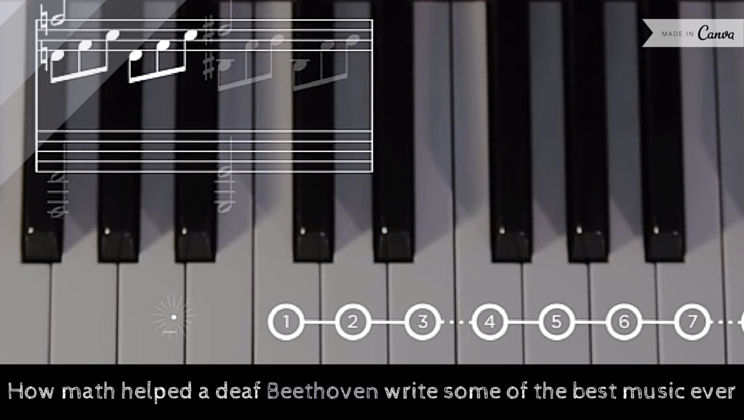 TED has produced an interesting video and accompanying blog post explaining how important elements of Beethoven’s creativity can be traced to mathematics. This helps explain how he was able to write some of his most beloved pieces even though he was going deaf.

The video points to the 13 keys which make up an octave on a piano, each separated from one another by a half step. It then shows the standard major or minor scale, composed of eight keys that used five full, and two half steps.

Analyzing the opening bars of Beethoven’s Moonlight Sonata, the video notes the significance of the grouping of the notes together in triads and how they contain an internal melodic structure which is geometric. Attention is drawn to the D triad in measure 50, made up of the D, F sharp and A notes, numbers one, three and five in the scale.

Sound graphs are employed to illustrate how consonance works in this passage, making the sounds naturally appealing to our ear. But Beethoven’s use of dissonance is also crucial and this is demonstrated by looking at measures 52 to 54, where he employs the notes B and C. The video argues that by combining the dissonance and consonance, Beethoven contrasts the “unquantifiable” features of “emotion and creativity to the certainty of mathematics.”

The relationship of mathematics to other great composers has also been a subject of interest. Bach’s work has been the focus of mathematical analysis due to its regularity and systematic character. Some have also pointed to the significance of numbers in Bach’s work, for example by pointing to how the number three symbolizes the holy trinity. Pianist Alexander Hawkins explained how he likes the fact that the second book of Bach’s Goldberg Variations begins with a French Overture. “It’s nicely perverse having an overture in the middle and it subtly breaks the regularity of Bach’s maths. This is [a] piece which isn’t 64, or 32, bars long. How long is it? With the repeats it comes out at 95 bars, 9 plus 5 equals 14; BACH – B is two, A is one, C is three, H is eight, add those numbers together and it comes to 14.”

And there’s plenty of evidence to suggest that some of the best-known composers had a fascination for maths. Mozart loved doing times tables, according to Andreas Schachtner, who was a court trumpeter and family friend. “When he was doing sums, the table, the chair, the walls, and even the floor would be covered with chalked numbers,” Schachtner wrote. His wife also reported that her husband was fascinated with algebra and arithmetic.

Some commentators have sought to interpret Mozart’s works in terms of his fascination with numbers. The Magic Flute opera is apparently fond of the number three, with characters appearing in threes, and a three-note rhythm sequence being used. The opera also features several pairs, day and night, fire and water, silver and gold, sun and moon, and when it comes to Sarastro’s power, this is bound up with the seal of the seven circles of the sun.

But maths isn’t equipped to explain everything about music. As well as the issues of “emotion and creativity” identified by Ted as “unquantifiable,” there’s also the matter of context. Christopher Hogwood, a leading scholar on Bach who also founded the Academy of Ancient Music, points out that unless you know the purpose of his musical compositions, the conditions under which he wrote, and the religious and philosophical views of the day, it is not possible to fully grasp his musical creations. “trying to make sense of Bach without knowing what was in his world is a compromise,” Hogwood said.