In 1851, Richard Wagner made a bold statement regarding the art of symphony: he claimed that, after Beethoven’s substantial contribution to the genre, the symphonies that were composed after his death were just an “epilogue”, as they did not bring any significant innovation. Can we say he was right? Yes and No: Modernism– and even the late Romantics— brought about a second renaissance to the genre, but he did not live to witness it in its entirety.

When Wagner was active, composers preferred to follow Franz Liszt’s lead and thus resorted to the symphonic poem. A musical realizing of a “literary principle”, it gave more creative freedom to composers, as it focused more on extra-musical perceptions than on the formal rules that were the basis of a symphony.

In 1876, Stéphane Mallarmé wrote the poem Prélude à l’Après Midi d’un Faune, which became a seminal work in symbolist poetry. 17 years later, Debussy set it to music, and the result was a symphonic poem of the same name: the opening flute solo, with a chromatic descent to a tritone below the original pitch and a subsequent ascent, is a very well-known passage in orchestral music, and the woodwinds play the lion’s share in evoking the underlying eroticism of the poem. After all, in Mallarmé’s original, the faun was playing his pipes before being aroused by passing nymphs. When the score was adapted to ballet, it caused an uproar due to explicit obscenity portrayed onstage.

Ralph Vaughan Williams used two poems by M. Arnold, The Scholar Gypsy, and Thyrsis, as an inspiration for this symphonic poem and, despite the title “elegy”, the work is more pastoral than melancholic. This is actually consistent with the literary sources he drew upon: The Scholar Gypsy relates the deeds of a former Oxford student who joined a band of gypsies, while Thyrsis is one of the shepherds versed in the art of poetry appearing in the poems by Theocritus and Virgil.

Tchaikovsky loved Shakespeare: he also composed an Overture to Romeo and Juliet and incidental music to Hamlet. This symphonic poem, written in 1875, reenacts the main themes in Bard’s last play, and the music evokes the stillness of the ship at sea, the grotesque nature of the monster Caliban and the love between Ferdinand and Miranda, which shares some similarities with the love theme of Romeo and Juliet.

The Isle of Dead, Rachmaninoff

Between 1880 and 1886, Swiss symbolist Arnold Böcklin painted the Isle of the Dead, which depicts a desolate islet emerging from an expanse of dark water, with a rowboat arriving on the shore. The painter himself described it as “a dream picture: it must produce such a stillness that one would be awed by a knock on the door. In 1907, Rachmaninoff saw that painting firsthand and, inspired by the desolate scenery, he composed a symphonic poem whose introductory bars are reminiscent of the sound of the oars. The Isle of Dead also contains references to the Dies Irae and a theme that evokes breathing, thus intertwining life and death.

The Fountains of Rome, Respighi

Four Roman fountains at four different times of day constitute the four movements of this symphonic poem by Ottorino Respighi: the first is the fountain of Villa Giulia at dawn, set in a pastoral landscape; the second is the Triton fountain in the morning, and Respighi’s music evokes Naiads and tritons dance; then comes the Trevi fountain at noon, set to a triumph. When the fourth fountain is introduced, the melody gets melancholic: the sun is setting on Villa Medici’s fountain.

In Saint Saëns’s le Rouet D’Omphale, following the original Greek myth, Apollo condemns Hercules to serve the Lydian queen Omphale while disguised as a woman, and, for the next three years, the Greek demigod finds himself spinning wool while wearing womanly dresses. The violins recreate the sound of the spinning wheel, while a more somber melody mirrors Hercules’s disgruntled mood.

Rimsky Korsakov was aiming for “oriental-themed symphonic music that evokes a sense of the fairy-tale adventures.” A symphonic suite in four movements and a unified theme, Scheherazade contains references to Sinbad’s ship, The Kalendar Prince, The Young Prince and the Young Princess, and a festival in Baghdad. A violin solo accompanied by a harp represents Scheherazade, while the sultan is rendered through a grim bass motif. This suite is very popular among figure skaters.

As a symphonic poem, Finlandia aimed to protest against the increasing censorship of the Russian empire, and, when performed, it was accompanied by a tableau depicting episodes from Finnish history. This symphonic poem has turbulent melodies, which depict the struggle of the Finnish people, while, towards the end, we hear the Finlandia Hymn: words were written for it in 1941 by Veikko Antero Koskenniemi, and it became one of the most important songs of Finland, It is also sung as a Christian Hymn, albeit with different words.

One of the creepiest folk tales serves as a backdrop to this symphonic poem by Dvorak: A distressed mother tells his child to behave properly, lest the Noon witch comes for him. When the hour strikes, the mother frantically heaps the child up and runs for her life and then faints. We then see (or hear) her husband coming home, where he finds his wife unconscious with her child in her arms. Too bad she had smothered him.

Don’t let the word Symphony fool you: the Dante symphony actually consists of two separate symphonic poems, one set in the Inferno, the other in the purgatory, both being orchestral. We know that Liszt wanted to compose a third choral movement to depict Dante’s Paradise, but Wagner, to whom the Dante Symphony was dedicated, dissuaded Liszt from giving the Paradise a musical interpretation: what remains is a choral magnificat at the end of the Purgatory movement, which mirrors Dante’s arrival in the earthly paradise.

Hetman Ivan Mazeppa was a very popular figure in the 19th-century literature, as he embodied the ideal of the Romantic Hero. Even though historically, he was well-versed both in the arts and in warfare, Byron and Hugo chronicled his journey through Europe while tied to a horse. He ended up in such a condition because he had been caught having an affair with a Polish countess. Liszt’s version follows Hugo’s narrative, in that the string section play the main theme, with the bassoon and the horn expressing astonishment: when he finally arrives at the Cossack Hetmanate, a march is heard.

“A musical symbol of fin de siècle modernism,” Don Juan was composed when Strauss was only 24 years old, and his version follows Don Juan’s story as told by Nikolaus Lenau, where the world-famous libertine, unable to find a woman to love–hence his promiscuity, which is more of a “journey” to him– simply loses the will to live (like queen Padme Amidala in Star Wars). Due to its high degree of difficulty, this symphonic poem is a staple in auditions.

In the summer of 1932, George Gershwin took a trip to Havana, and, upon his return to America, he celebrated the land he had visited with a symphonic poem full of Caribbean rhythms, native percussions and a theme that derived from one of the “hits” of that year. It premiered at the Lewinsohn stadium in New York as part of an all-Gershwin soiree, with 17,845 people in attendance. The presence of Clavés, gourdes, and maracas won the audience over. 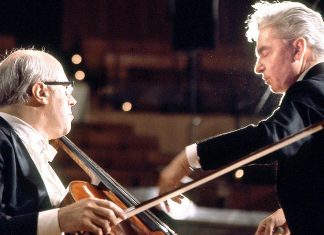 CMUSE - Sep 20, 2017
Only a few can lay claim to using the cello to produce much more melodious sounds than Mstislav Rostropovich in this 3-minute display of...