The question of how the f-hole design found in violins, violas an cellos came to predominate is one which has divided historians and musicians for some time. From the suggestion that it was simply a creative flourish by an early violinmaker, to the idea that violins were so designed in honour of a royal customer of the 16th century, King Francis of France, various competing theories have been advanced.

Now, researchers at the Massachusetts Institute of Technology (MIT) are putting forward their own perspective. According to the findings of a seven-year project carried out in conjunction with violinmakers at the North Bennet Street School, f-holes were developed because they enhanced the acoustic power of the instrument. The research revealed that the more elongated the instrument’s F-holes, the more sound it could produce. Moreover, the review of historical records and scans of instruments revealed that the f-holes from the Cremonese period onwards became increasingly elongated.

Historians have long dated the emergence of the modern violin to the 1500s in Cremona, Italy, where it is associated with the Amati family. The MIT study calls into question at least some aspects of the idea of a radical departure from previous instruments such as rebecs, lyres and fitheles.

An important part of the development from medieval instruments to their modern-day successors was the change of shape in their sound holes. The MIT research noted that over the eight centuries examined, from the 10th to the 17th 18th century, their shape shifted from a simple, circular hole in the earliest examples, to a semi-circle, followed later by a C-shape which then was gradually developed into the f-holes with which we are familiar.

On top of the f-holes, another key feature of the violin the researchers identified as contributing to improved violin sound quality was the thickness of the back plate. This feature also evolved throughout the period after the Cremonese era.

Based on a review of the development of stringed instruments from the 10th to the 17th century, the scientists conclude that the development of sound holes proceeded in a manner consistent with natural mutation or craftsmanship error, a little like natural selection in the plant and animal kingdom. This theory suggests that f-holes were gradually altered by the process of manufacturing them over an extended period, and it calls into question the presumption that the violinmakers knew which shape of hole produced the best sounds. “We found that if you try to replicate a sound hole exactly from the last one you made, you’ll always have a little error,” Nicholas Makris, who led the study at MIT, explained. “You’re cutting with a knife into thin wood and you can’t get it perfectly, and the error we report is about 2 percent … always within what would have happened if it was an evolutionary change, accidentally from random fluctuations.”

Makris further contends that while violin-makers like Amati or Stradivari may have sought to copy the instruments with the best sound quality in the course of their manufacturing activity, this does not necessarily mean they deliberately aimed at the development of f-holes.

Makris noted that the extent of what the violinmakers of the 16th and 17 centuries understood about the desirability of longer f-holes is open to debate. Indeed, there are those who sharply disagree with the conclusions of the MIT research study.

Writing in the Strad, Stewart Pollens bluntly termed the research “simplistic at best” and the claim that f-holes emerged unintentionally as “spurious.” He writes, “While, as the authors of the study assert, it may be true that minor differences in the shape of f-holes are due to the vagaries of handcrafting, the essential shape, dimension and placement of f-holes have traditionally been governed by rigid proportional established in Cremona in the early 16th century.”

Pollens also challenges the conclusion that f-hole length is the primary reason for an instrument’s acoustic power, citing plate thickness and arching height as equally, if not more, significant. 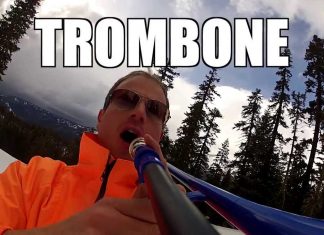 D Grant Smith - Mar 31, 2015
The Flight of The Valkyries has been the theme for several modern film and TV specials. Recently it was used in an even more...