Choosing equipment for the audio control is always a daunting task because of the sheer vareity in the instruments and devices available on the market.

As far as the analogue controllers are concerned, everyone wants quality, vintage sound and crispness from them. SSL Fusion has been a choice of a large number of people because of its tonal character, design and performance.

On the other hand, Neve MBP is another cool processor that gives you better control over audio appliances. These two processors are often competing against each other on several forums.

In this article we will describe the features of each one of these processors so that you can settle on the one that best suits your needs.

The Differences Between SSL Fusion vs Neve MBP

SSL Fusion stands for Solid State Logic Fusion. One can have an idea on the effort put in the manufacturing of this product is that even the designing of this processor took two years.

A joint expertise of industry engineers, producers and mixers got you a device that meets the standard of today’s hybrid studios.

The features of the SSL fusion stereo processor ensure that they perfectly blend realism, depth and additional character. 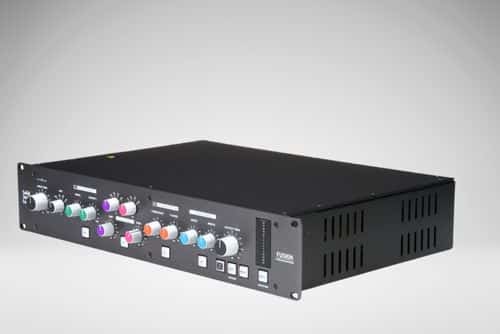 The analogue processing tools used in this processor bring a next level of adaptability and extraordinary sound character. The production process is also accelerated because of the advanced connectivity features that SSL has to offer.

The violet EQ featured in the SSL processor is the first new analogue EQ circuit that the company has manufactured in more than 25 years. You can adjust the gain and corner frequencies as per your choice.

Whether you have to add a high-end gloss or a low-end solidity, you can do so because of the subtle tonal structuring. You can switch the purple capped low section between 30,50,70 and 90 Hz.

As far as the pink capped high section is concerned, the frequency range for its switching is between 8,12,16 and 20 kHz. The two portions come with the gain range of 9 dB.

The HF compressor has crossover and threshold frequency controls which have the orange caps. The gained reduction is represented by the tricolour LED.

Basically the goal is to bring a softness in the high end of the source, that is accompanied by the smooth vintage quality. Talking about the compression, you can easily manage it because of its transparency.

The specification of the frequency range is controlled by the crossover controls. The job of the threshold controls is to give you the figures on the amount of HF that is applied to decrease the edginess and harshness.

The next feature on the SSL Fusion processor is the vintage drive that gets you the required vigour. This nonlinear harmonic amplifier circuit makes sure it gets you a perfect mix of power and cohesiveness.

The ‘density’ and ‘drive’ settings go hand in hand to give you smooth compression and harmonic saturation. The high frequency compressor is responsible for giving the classic sound of high frequency rounding. It controls brittle high frequency fizz.

With primary focus on the frequency spectrum, the compression delivered by this compressor is just perfectly right. It is the high frequency compressor that gives a back to basics analogue circuit approach to your music.

There is a significant reduction in bite and harshness because of the dual control method used by the compressor. If you lose the control of the effectx you get indicated by the LED.

There’s a bypass switch that lets you make the comparison. An important thing to note about the compressor is that it comes without any makeup gain control.

The custom designed transformer circuit comes with the simple button that when pressed adds more thickness to the low end and gets the high end shiner.

If you try to make changes in the input level, you shouldn’t expect a great response from the processor because it is not good at that.

Therefore, it requires you to get the circuit on or off and then decide on the sound that is suitable for your stuff.

Neve MBP is The Rupert New Designs Neve Portico II Master Buss Processor. It is a discrete stereo processor that has rich voltage. It has a packing of 16 push button led switches and 20 mastering grade dentated pots in its aluminium faceplate.

Each channel gets its gain reduction and output level from the 24 steps offered by the output metre of this processor. 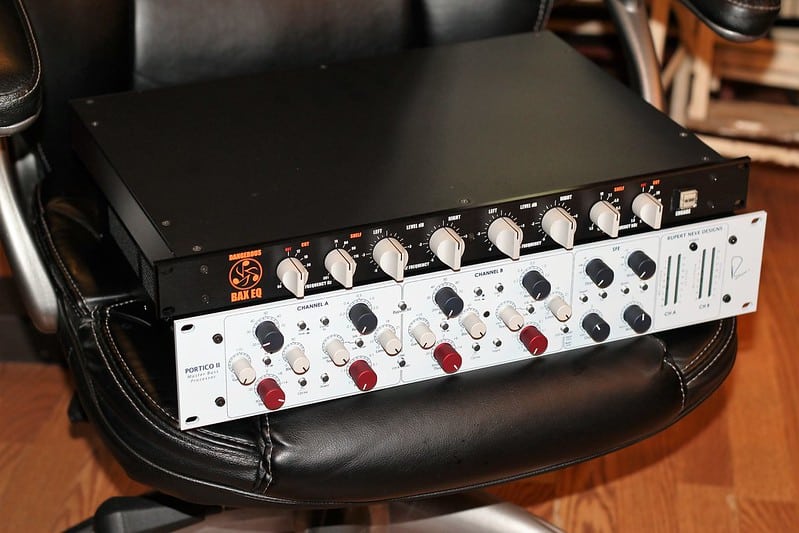 Most of the mastering quality A/D conversion provides +24 dBs trim which is successfully exceeded by the Neve MBP. Itd XLR outputs an exceptional +25 dBu.

Each compressor consists of ‘silk’ which is a distortion circuit. The circuit also has a peak limiter. As far as the sound field editor is concerned, it can be defined as a midsize equaliser whose frequency points are fixed.

There is no doubt that the compression characteristics of the Neve MBP are highly transparent but it is not the best product for this job. The reason is that despite its settings, the manipulation of the stereo image done by the MBP is not aesthetic.

You cannot really notice the manipulation when the link mode is on but it is quite unacceptable when you are at the end of your chain.

The manipulation of the studio image is not just limited to the compressor but the silk distortion circuits are also responsible for expanding the image inappropriately. Because of this added width the track sounds unbalanced.

However if we look at the strengths of this processor that is it’s amazing flexibility. It comes with the transparent compressor circuit and that is why you can set it well on any content.

The silk distortion circuits also add more to the functionality of the Neve Master Buss Processor because they are the best solution for solving the closeness and equalisation problems with the knob.

An important thing to understand here is that most of the dance masters are good but the great ones surpass the good ones in aesthetic distortion. Neve is undoubtedly one of the great ones.

Talking about the limitations of the MBP, the reason behind its drawbacks is that the developers tried to fit multiple features in a little box.

Regardless, it is an exceptional device for recording mastering and mixing engineers. At the end, both are great choices, though the SSL Fusion slightly edges out the NEVE MBP.