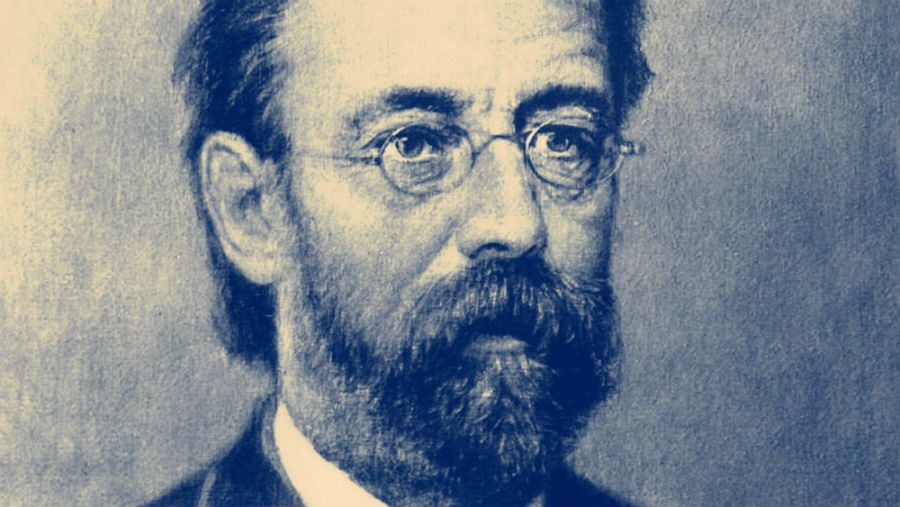 “With God’s help and grace, I will be a Mozart in composition and a Liszt in technique.” – from an 1843 diary entry

The most famous Czech composer outside of the region is Antonin Dvorak, but ask the question among Czech-speaking listeners and you’re more likely to hear about Bedrich Smetana.

Dvorak’s work radiates powerfully on an international level; Smetana is less famous outside of his homeland, but his work has reverberated with greater force within it. He is even described as a nationalist composer, a label that is technically accurate but has come to carry some anachronistic political connotations—and may not adequately convey the great influence other European composers, such as his Hungarian mentor Franz Liszt, had upon him.

It would probably be better to simply say that his work is more popular in Czech-speaking regions than it is elsewhere, and that it preserves more of his homeland’s musical traditions. Schonberg’s The Lives of the Great Composers identifies Smetana as “the first to go to Bohemian folk song and use it as a basis for art music,” a distinction that sounds narrow and technical but isn’t; his decision to do this defined his legacy, and changed European classical music forever.

His best-known work in the English-speaking world is by far The Bartered Bride, which marbles Czech folk music with the more historically Italian tradition of comic opera. Smetana wrote it as an attempt to bring shape to a new tradition of Czech comic opera, which he saw as a counterpart to the German renaissance of tragic opera then-spearheaded by the German titan Richard Wagner. The fact that he never achieved a comparable profile is not, in and of itself, terribly significant; The Bartered Bride is worthy of the comparison. His other eight operas are seldom performed outside of the Czech Republic today, but fans of The Bartered Bride will find that his other operas are in many respects equally impressive. His non-operatic works, too, are worthy of attention. Bedrich Smetana’s six-part symphony Má vlast (“My Country”) is more directly Czech in its subject matter, but it travels well. So do his two openly autobiographical string quartets.

If you’re not familiar with Smetana, it would be accurate to say that his aspirations to represent a meeting point between Mozart and Liszt were not far off the mark. You will certainly hear Mozart’s echoes in The Bartered Bride, as Smetana conveys a similarly playful understanding of melody, and music critics have already noted (sometimes viciously) the profound influence Liszt had upon him. But he was also unmistakably Czech; he belongs more to his homeland than he does to the rest of the world, and he wouldn’t have had it any other way.

Here are six interesting facts about the ambitious and versatile Bedrich Smetana:

Under his father’s tutelage, Smetana began to show musical talent at a very young age. He performed in a string quartet at age 5, gave a solo piano performance at age 6, and wrote his first composition at age 8.

2. He was bullied out of school for being an uneducated country boy.

Smetana’s father, František Smetana, was an accomplished musician—but he was also a working-class brewer who lived out in farm country. When Smetana moved to Prague to attend school at age 15, more privileged students openly ridiculed him for his poor grasp of Czech (German being the vernacular of the broader region) and his lack of city manners. He ended up dropping out.

It’s hard to imagine how different Smetana’s life might have been if his peers in Prague had treated him more kindly, but he did end up learning Czech anyway as an adult—and doing more for Czech-language folk music than almost anybody.

4. Czech audiences loved Smetana, but German critics thought he was too German.

After the 1862 debut of Smetana’s symphonic poems Richard III and Wallenstein’s Camp, audiences in Prague were thrilled but German critics were not. “Singular notices in the press!,” Smetana wrote at the time. “The Czech papers praise uniformly. It is the German papers that reproach me with belonging to the neo-German school.” In Liszt and His World, Kenneth DeLong quotes one contemporaneous German review:

“We now turn to the most delicate part of this interesting concert program: the two large orchestral compositions of Smetana, Richard III and Wallenstein’s Camp … It does not matter that the composer calls them fantasias for orchestra. The overall architecture in general; the character of the motives, which were clearly inspired by something other than musical compositions; the thematic arrangement of them into a massive construction; the sharp, glaring contrasts in the widely differing effects; the attempt to impose the stamp of a unified organism on the overall composition with the use of so-called guiding ideas … all of this demonstrates very clearly the intentions of a composer who is obviously second-rate … If one can judge by only one hearing, Richard III and Wallenstein’s Camp seem to ‘out-Liszt’ their eleven predecessors.”

German audiences warmed up to Bedrich Smetana over time, but the broad outline of Smetana’s legacy—where he is generally appreciated by Czech audiences and critics, but less commonly enjoyed elsewhere—had already begun to take shape, even before his best-known work had been completed. This is not to say that all Czech critics appreciated him; his habit of recruiting non-Czech vocalists infuriated some, prompting the local art paper Hudebni listy to describe Smetana’s operas as the terminal point by which “Czech opera sickens to death at least once annually.” He took this criticism very personally, briefly disappearing from the public eye.

5. He never heard his own later work.

Smetana’s health began to deteriorate (which he blamed, in large part, on the stress caused by his critics) and he went completely deaf in the early 1870s, but the last decade of his life was his most prolific. He wrote five of his nine operas and a number of instrumental pieces, including an autobiographical string quartets (performed, in a private debut, by a group that included Antonin Dvorak himself).

Ultimately, Smetana’s illnesses caught up with him. It was in 1883 that, still deaf and suffering from dementia (most likely caused by neurosyphilis), he composed his more challenging second string quartet, an autobiographical account of the difficult final decade of his life. He died in an insane asylum a year later. Although it is often described as radical and experimental, Smetana’s String Quartet No. 2 is arguably his greatest instrumental work. The third movement, “Allegro non più moderato, ma agitato e con fuoco” (“Cheerful, not moderate; agitated and aflame”), is a defiant statement to his critics and to the disease that would ultimately take his life.

“It is mostly loss,” Arthur Schopenhauer once remarked, “which teaches us about the worth of things.” The same might be said of people. Driven out of the public eye by German criticism and Czech power struggles, Smetana lived most fully as a composer while he was slowly dying as a man. By the time of his death, his genius had been fully recognized by the Czech classical music community, by political leaders who saw his celebration of folk music as the soundtrack to independence, and by the people at large. His 1884 funeral was a national event, as crowds of people processed through the streets of Prague in his honor. In 1936, a museum was dedicated to preserve relics of his life and work. It is still a major tourist attraction in the city.

The same kinds of students who ridiculed him for his poor knowledge of Czech are now required to study him. The same kinds of musicians who dismissed him because of his neo-German style are now expected to include his works in their repertoires. Was he what he aspired to be as a young man—“a Mozart in composition and a Liszt in technique”? Not entirely. The man who aspired to imitate Germans, and then was accused of imitating Germans, ultimately carved out a legacy that is uniquely and unmistakably Czech. And if the rest of us fail to fully appreciate his contributions to classical music, so much the better; it proves that, accusations to the contrary notwithstanding, his music was never really about pleasing us. It was about his audience in Prague, the pastoral countryside from which he came, and the unique national identity that would emerge—for him, and for his nation—after his death. He has achieved posthumously what he could not achieve during his lifetime: full recognition of the fact that he is, indeed, a distinctively Czech composer.