Prehistoric music (formerly known as primitive music) is a phrase used in music history to refer to any music produced in preliterate societies—societies that existed before writing was invented.

Ancient music follows prehistoric music in different regions of the world, yet it persists in isolated locations. However, it is more typical to refer to “prehistoric” music as folk, indigenous, or traditional.

Prehistoric regions and cultures that we can investigate include Asian, Indian, European, African, North American, and Australian cultures.

This article will summarize the prehistoric timeline before highlighting four distinct cultures where musical instrument archeological remains have been found.

Prehistoric or Primitive Music Comes From What Type of Cultures

Prehistoric time is roughly 2.5 million years ago, up to 1,200 BCE. This long period, known as the Stone Age, can be subdivided into three periods: Paleolithic (Old Stone Age), Mesolithic (mid-Stone Age), and Neolithic (New Stone Age).

We’ll briefly examine these periods below because, within those periods, we find clues from which prehistoric culture music developed.

Early humans were hunters and gatherers who lived in caves, rudimentary houses, or tepees. For hunting birds and wild animals, they employed simple stone and bone tools and primitive stone axes.

Ancient humans cooked their food over controlled fires and made art from the bone remains of their food—archeology has revealed that our ancient ancestors produced instruments such as clay drums and flutes (more images and information here). 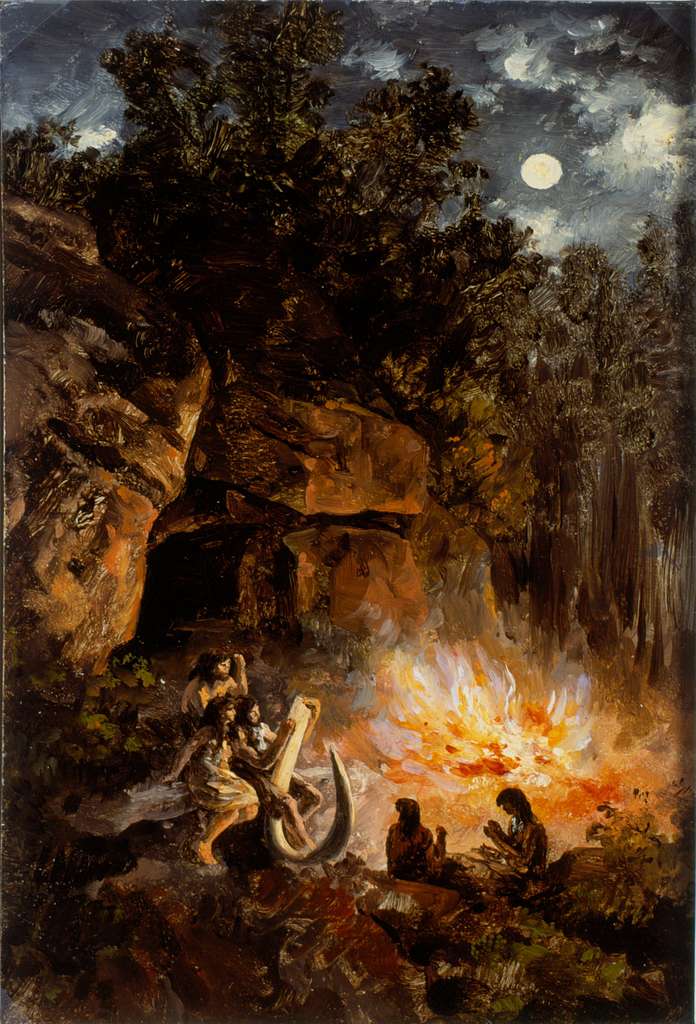 Humans used small stone tools, now polished and occasionally made with tips and connected to antlers, bone, or wood, to function as spears and arrows. They frequently lived in nomadic camps near rivers and other bodies of water.

They developed agriculture during this period, resulting in more permanent communities in villages.

Ancient humans transitioned from a hunter-gatherer lifestyle to agriculture and food production. They tamed animals and planted cereal crops. They settled on the plains, using polished hand axes and adzes for plowing and tilling the ground.

Not only were tools improved, but also farming, home construction, and art, such as pottery, stitching, and weaving.

Prehistoric Cultures Around the Globe

All cultures, regardless of their origin, possess the ability to produce music.

Within prehistory, the term “music” can be somewhat problematic—while our Western understanding of what makes up music is considerably different in places, for example, Sub-Saharan Africa.

Music is sometimes so entwined in people’s lives that we cannot see it as a separate entity. In other prehistoric folk cultures, music, such as natural sounds, is emulated by people to attract animals during the hunt or used in shamanic rituals and beliefs.

They may also use music in a game for entertainment or to fuse bonds among members of the same prehistoric tribe and bring them closer together—scientists posit that this gave prehistoric humans the surviving edge over Neanderthals whom they coexisted with.

We’ll highlight four cultures spanning the globe below to give an overview of the prehistoric cultures that produced music below.

Various African sites have rock gongs and art dating back to the Neolithic period.

While the purpose of these rock gongs isn’t entirely known, archeologists suggest a connection between them and the rock art depictions of animals and other figures—they use varied and included purposes such as signaling because the sound carried for several miles, musical, and ritual purposes.

The rock gongs could be played individually, but there is also evidence that they were played in ‘gong ensembles’.

Archeological evidence from China discovered several gudi (meaning “bone flutes”) in 1986 in Jiahu in Henan Province. These gudi date back to around 7,000 or the Mesolithic period.

The flutes, containing between 6 and 9 holes per flute, were made from the hollow bones of a red-crowned crane. The bone flute can play the five- or seven-note Xia Zhi scale and the six-note Qing Shang scale of the ancient Chinese musical system.

Flutes made from materials ranging from bone to wood have been found across Europe.

The oldest flute, dating to the Aurignacian industry, was discovered in 2008 in Germany in Hohle Fels, showing that humans practiced music as early as 40,000 years ago (Paleolithic period) when modern humans expanded over Europe.

The oldest set of wooden pipes was found in Wicklow, Ireland, with carbon dating showing they are from 2,167 BCE (plus or minus 30 years).

The six pipes are made from yew wood and range from 12 to 20 inches (30–50cm), tapering at the one end but without finger holes. It is thought that these pipes could have been strapped together.

Before Europeans arrived in Canada, Indigenous Canadians made their instruments from found materials for millennia. First Nation clans fashioned rattles from gourds and animal horns; many rattles were intricately carved and exquisitely painted.

They also constructed birchbark horns and drumsticks out of carved antlers and wood. Drums were often constructed from carved wood and stretched animal skins.

These musical instruments served as the backdrop for songs, while songs served as the background for dances. Song and dance are sacred to many traditional First Nations people. Chanting is also an important part of their musical culture.

Every human civilization, like every other, has music and language. At the same time, musical and language systems differ greatly. Unknown musical systems might not even seem like music.

Still, it is unique to each culture from prehistoric to modern times. We highly recommend Jeremy Montagu’s book Origins and Development of Musical Instruments for an in-depth investigation of the development of musical instruments through the millennia.