Pipe organs have been part of the majestic history of Westminster Abbey for hundreds of years. The current organ, made by the organ builders of Harrison and Harrison, was installed in 1937 for the Coronation of George VI. Since that time, it has also been used for the Coronation of Queen Elizabeth II, weddings and funerals of members of the royal family and others, special events, as well as daily religious services and weekly organ recitals.

The first known account of an organ in the history of Westminster was in 1304 and consisted of a “pair of organs.” These organs were in the Lady Chapel that had been built during the 13th century. This chapel was later replaced by the Lady Chapel financed by Henry VII. Construction began in 1503 and the chapel is considered one of the greatest works of English medieval architecture. The tomb of Henry VII and his queen, Elizabeth of York, is behind the altar.

The next existence of a pipe organ was in the second half of the 16th century. This was also when names and dates of the organists of Westminster Abbey began to be recorded. The organ was in the Quire or Choir, originally where the monks worshipped. There were several redesigns during the 18th and 19th centuries, changing the Quire to its present Victorian Gothic style. Several prominent English composers have also served as organists of Westminster Abbey. Among them were four from the 17th century: Orlando Gibbons, Christopher Gibbons, John Blow, and Henry Purcell. 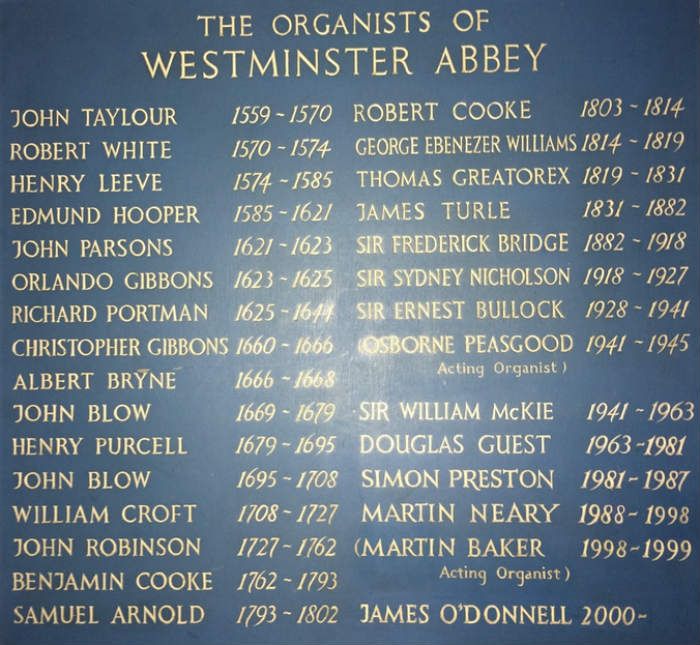 This organ was followed by one built for the coronation in 1727 of George II and placed at the Quire’s entrance on the central screen. In 1848, a five-manual organ made by William Hill was installed on the north and south sides of the Nave screen. This is also the location of the Harrison and Harrison organ which was built with some of the pipework from the Hill organ.

The company that built the 1937 organ was and is one of England’s best known and highly respected organ builders. It was founded by Thomas Hugh Harrison whose father made parts for organ building. Harrison began a seven-year apprenticeship to an organ builder when he was 12 years old and, upon completion, accepted the position as manager with an organ company. He decided to go into business for himself in 1861.

He earned the respect of people in the music world but by 1870, the company was facing financial issues. He moved to Durham and started over in 1872. His father supported the move and the company became known as Harrison & Harrison. By the end of the 19th century, they had built more than 300 organs for various places throughout England and Scotland.

When Thomas Harrison retired, his sons, Arthur and Harry, succeeded in handling all aspects of the company. It was during their leadership that work began on the Westminster Abbey organ. Arthur died before the instrument was finished but it was installed on schedule. It had four manuals and 84 speaking stops. There were no major changes until 1982 when the organ had a complete overhaul.

One of the changes was the addition of a fifth manual. This was to be used for the Bombarde division that was completed four years later, in 1986. This included reeds suitable for fanfares and a powerful chorus that would strengthen the sound during large congregations. New stops were added to other manuals and to the pedal division. The memory capacity was overhauled in 2006, doubling the number of channels to 512. Ten thumb pistons were added to the four main manuals plus reversible thumb pistons for the large stops. A new rank of pipes was installed in 2008.

Every Sunday, Westminster Abbey offers free 30-minute organ recitals beginning at 5:45 p.m. These recitals give visitors the opportunity to hear the Harrison and Harrison pipe organ in the historical setting for which it was built.