Many people believe that technology kills creativity. While it is true to some extent, there are times when you need the gadget to ensure quality. The right tech gear can do wonders and take your work up a notch.

This is why musicians always invest in tech gear for recording and performing. It improves the sound quality and makes sure that everyone hears the authentic sound.

An audio interface is a gadget that takes signals from the microphone and the instrument and converts them into a recognizable format for your PC. They are usually connected to a PC via USB cables.

However, it is seen that it lacks features and has limited capabilities. So, if you are looking for production-quality audio for your project, consider investing in an audio interface.

MADI and Dante are two popular choices when it comes to an audio interface. Both have been widely used by audio engineers and professionals and enjoy great popularity.

Below is a comparison between the MADI and Dante audio interface.

Without an iota of doubt, MADI is among the most sought-after audio interfaces in the market. It is manufactured by RME, a company that specializes in manufacturing audio solutions.

Although the company offers many other products as well, a significant portion of its popularity and success comes from the MADI audio interface. 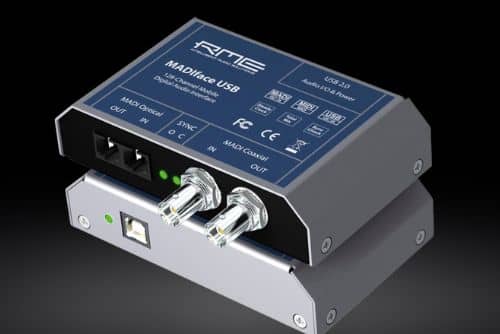 MADI stands for Multichannel Audio Digital Interface. The best thing about the MADI lineup is that they use the latest technology and boast all the exciting features that you may need for your audio project.

The MADIface XT USB audio interface, for example, is the first USB 3.0 interface on the market. The company is not reluctant to bring the advanced technology to the table, and its audio interfaces are testament.

The MADI audio interface packs a remarkable channel count into a portable housing for your convenience. Whether you are looking for an interface for live performances or a studio, it is an excellent choice for all audio needs.

It supports 196 input channels and 198 output channels for a whopping total of 394 audio channels.

The incredible channel count may make you think that the MADI audio interface is a complicated audio solution. However, as it turns out, using it is a walk in the park, even for those not familiar with the working of an audio interface.

You get two super clean combo inputs on the front side that can work with mic or instrument level signals. You also get a stereo headphone slot to connect headphones to the system.

Another striking feature of the MADI audio interface is that it comes with a full-color display to provide metering for all input and output channels and the access to settings for the unit in the internal zero-latency mixer.

Now talking about the back panel, the MADI audio interface provides you with a pair of line-level outputs with high-end digital-analog converters for direct connection to the monitors.

Apart from that, you get AES, MIDI, and three ports on the rear side for better connectivity. 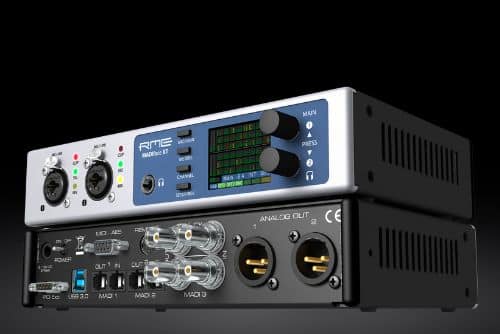 With the MADI audio interface, you can either use the USB 3.0 port or the external PCIe port to connect to a host computer seamlessly.

The Totalmix software in this interface provides you with an excellent digital mixer that allows for practically unlimited mixing and routing of inputs and your playback channels to any output you want.

The MADI audio interface boasts the REM’s built-in effects system to float your boat, such as eq, dynamics, reverb, and delay. These features make it an excellent choice for both live and studio use.

That being said, the MADI interface is a clunky interface weighing 4.85 lbs. So, moving it around can be a hassle if you intend to use it in your performances.

Dante has become a de facto standard for audio transport with tons of cool features. It has been around for a long time and has been used in projects of all types. It was introduced in 2006 by Audinate, and it has been on a roll ever since.

Your audio is your craft and is important to you! More and more audio engineers are recording shows these days, making the Dante interface an excellent investment.

Convenience is high on the agenda with the Dante audio interface. It is easy to incorporate into the products and just as easy to operate. It has an incredible performance, and it works equally well in a studio and or large stages.

Any person with basic know-how with audio will tell you that the industry used analog cables for a long time to transfer audio from one place to another.

While they worked well in most situations, they had shortcomings that needed to be overcome. It is seen that analog signals deteriorate as the distance increases. To worsen the problem, they were also susceptible to electrical and mechanical noise.

This is where the Dante audio interface comes in handy. It brings an exceptional remedy to all the problems mentioned above and helps you transport hundreds of channels of pristine audio over a single inexpensive ethernet cable.

You can send the audio files to as many devices as you want and make instant changes using the software.

Latency has always been a problem in audio interfaces. Even today, some interfaces sacrifice flexibility to reduce latency.

Talking about the Dante audio interface, it gives you smooth connections with latency as low as 150 microseconds. It remains consistent, and you can also adjust it as desired. 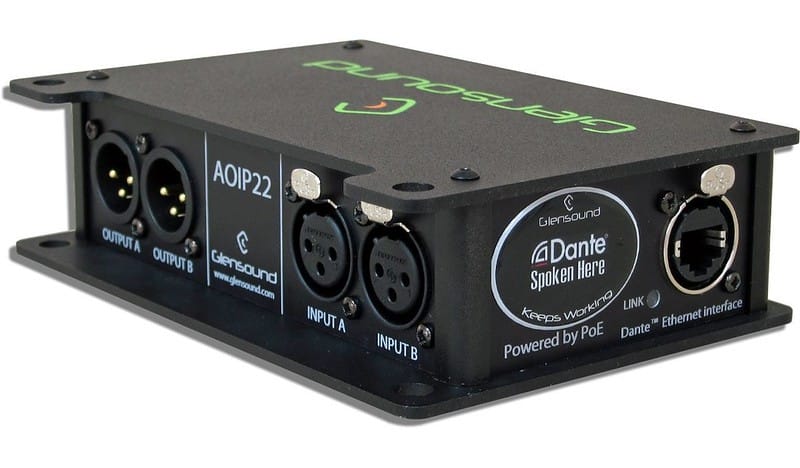 As for portability, the Dante audio interface weighs next to nothing. It has a compact body and low weight, making it an ideal travel companion. You can carry it around without any problem and store it easily anywhere you want.

MADI and Dante enjoy a special place in the audio world, thanks to their outstanding features and remarkable sound quality. Both interfaces allow for seamless audio transport and provide you with ample channels for the best experience.