To offer a little context may be helpful with this title. The cello or to give the instrument its full name, the ‘violoncello’, is a member of the string family. This includes the violin, the viola, and the double bass. In earlier periods of music, the Renaissance, for example, this family would have included the ‘viol’ that declined in popularity once the violin had begun to take center stage.

With the violin at the top of the string family’s range, the viola follows next, then the cello and the double bass. This makes the cello an instrument that, in most orchestral and ensemble settings, plays the lower parts of a composition, often ‘doubling’ the line of the double bass or bassoon. That is not the whole picture as the cello often plays a melodic part too as it is one of the most richly expressive instruments available today and is compared to characteristics of the human voice.

Cellos are wooden in construction, using woods such as spruce or maple. The neck of cellos is carved in a gently ornate style with the fingerboard and tuning pegs made from ebony, a dark African hardwood. Traditionally the strings on a cello would have been made from catgut which is really the intestines of goat, but strings today for the string family are wound, metallic strings that use exotic materials like titanium.

Sizes of cello vary from full-sized right through to three-quarter sized to accommodate all ages of players. The way these smaller instruments are made is broadly the same as the larger counterparts and allows children from as young as three or four to begin to learn the cello. On the other side of the cello range, some cellos are bigger than full-size ones developed for cellists with particularly large hands but these are a historic curiosity rather than a common option today.

Under normal circumstances, the cello has a range that spans an impressive six octaves if you include its capacity to play harmonics. These are artificially or naturally produced tones that result from particular playing techniques used by the advanced cellist that have a light, slightly thin timbre when compared to a normally stopped note.

There are four strings on today’s cellos with the lowest string tuned to a C2 that is two-lines below the bass clef. Each string is tuned to a perfect 5th above this giving the open strings on the cello the following notes; C, G, D, A. Each string has an approximate range of three octaves making the cello an immensely flexible instrument and one frequently used for Concertos where its qualities can be fully explored.

There are some compositions, notably the ‘Sonata for Solo Cello’ by Zoltan Kodály that requires some advanced alterations to the instruments. Kodály’s Op.8 (1915) composition is written in the key of B minor and is considered by many cellists to be one of the most important works for solo cello since the JS Bach Cello Suites.

The Sonata has three movements in the familiar Fast-Slow-Fast pattern of tempi. What makes the Kodály piece unusual is that it calls for a different tuning to the standard tuning mentioned above. Whilst Kodály allows the upper two strings to remain unchanged on A and D respectively, the two lower strings he asks the performer to change to an F# and a B with the B now a semitone lower than the customary tuning.

This technique of altering tuning on string instruments is called ‘scordatura’ and is perhaps more commonly associated with guitarists and lute players. When applied to the cello the lowest note becomes a B2 and brings with it a significant change in the instrument’s timbre and expressive range. It presents some technical challenges for the soloist that at the time of its composition were thought to be almost unmanageable.

Kodály said that he felt certain that within twenty-five years of the composition being finished that no cellist would be able to enter a conservatoire without being able to perform the work. To a greater extend he was right and it is now a piece that is firmly embedded in the repertoire of cellists across the world.

There are physical limits for scordatura as there comes a point where the cello simply will not play in a manner that allows notes to stay in tune or for the performer to adequately realize the composer’s intentions. Nevertheless, an extension to a low A2 would be an option but beyond that, the tension in the string would be overly compromised. I believe that it also presents issues with the tuning pegs of the cello if the regular pitch of the cello is altered. I have not discovered any compositions that demand this extension of the cello, but I would not be surprised to discover contemporary works that have made these requests of cellists.

Double basses you can commonly see in orchestras with either a fifth string or an extension to the low E strings that allow the instrument to stretch down to a C or even a B1. This came about as a result of some composer’s increasingly ambitious designs and has now become very much a norm for the players of the double bass. What I wonder is whether or not the cello may one day also be subjected to these changes with the addition of a fifth string, lowering its range perhaps as far down as an F1? 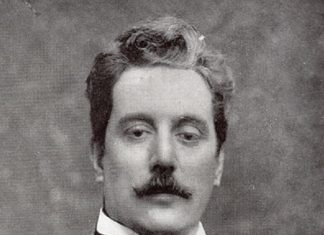 CMUSE - Feb 6, 2018
Giacomo Puccini (1858 - 1924) is recognized for his contribution to classical music. Often touted as one of the best classical composers of modern times,...

A Guadagnini cello sold for a record-breaking $1.5 million