The term “perfect pitch” indicates the ability to identify the pitch of a musical tone without an external reference pitch. The first studies about the perfect pitch – or absolute pitch – can be traced back to the 19th century and they focused on the phenomenon of musical pitch and the methods for measuring it. “The estimation of pitch demands a musical ear. The measurement of pitch is purely mechanical, and requires simply the power of hearing and counting beats,” wrote Alexander J. Ellis in 1876.

Despite the straightforward definition, absolute pitch is still clouded in mystery: it is unclear, for example, whether it is something you are born with or something you can learn. Genetics, professor Takao Hensch explains on NPR Classical, might play a role but most of the studies think it’s a matter of early-life experience, training or exposure to music. It is a cognitive trait since it needs the memory of the frequency, a label for it (such as “B-flat”), and exposure to the range of sound encompassed by that categorical label.

Statistics show that only one in 10,000 people have perfect pitch. On the contrary, relative pitch— the ability of a person to identify or recreate a note by comparing it to a note of reference and identifying the interval between the two notes—is quite common among musicians and it can be developed through ear training.

We’ve found some other interesting facts about this ability/phenomenon/or gift, whatever you might call it:

It almost goes without saying that Mozart was identified as having perfect pitch. In the summer of 1763, right before he toured Europe with his family and gained the reputation as a musical prodigy, an anonymous letter appeared in the Augsburger Intelligenz-Zettel. It included the following statement: “I saw and heard how, when he was made to listen in another room, they would give him notes, now high, now low, not only on the pianoforte but on every other imaginable instrument as well, and he came out with the let- ter of the name of the note in an instant. Indeed, on hearing a bell toll, or a clock or even a pocket watch strike, he was able at the same moment to name the note of the bell or time piece.” Even though Mozart is the only Western musician and composer who was explicitly acknowledged as having perfect pitch, Bach, Händel, Chopin, and Beethoven are generally known to be endowed with that ability as well.

Bats, wolves, dogs, gerbils, and birds appear to have perfect pitch: those animals use forms of that ability to find possible mates or…meats. Psychologist Ron Weisman of Queen’s University in Ontario (who recently passed away at age 77) conducted a two-fold experiment involving zebra finches and humans (practicing musicians), testing them in frequency-range discrimination. In the cross-species comparison with humans, zebra finches appeared to have not only a special sensitivity for the frequencies in their songs but also a general ability to sort frequencies across spectral regions: the birds were able to respond 85% accurately on the final training day.

The case of tonal languages.

There seems to be a correlation between tonal languages and perfect pitch: a 1999 study conducted at University of California, San Diego led by Diana Deutsch found that native speakers of Mandarin Chinese and Vietnamese, compared to their English-speaking counterparts, exhibited “remarkably precise and stable form of perfect pitch in enunciating words.” A 2004 follow-up study by the same university then concluded that native speakers of a tonal language can actually “acquire” perfect pitch in the same way they learn a second language.

A 2013 study from the University of Chicago claims that perfect pitch might not be perfect after all. 27 participants who claimed they had perfect pitch were made to listen to a piece of symphonic recording which was progressively de-tuned by 2% of a note every minute for the first 15 minutes, and then the rest of it was played out of tune. Not only did they fail to identify the de-tuned notes as incorrect, but they also claimed that the correct notes were off-key. For your information, they listened to Brahms’s Symphony in C minor.

What’s the deal with synesthesia?

Perfect Pitch is oftentimes associated with synesthesia. Synesthesia is a neurological condition where the subject experiences an involuntary crossing of sensory experiences: information received through one sense (e.g. hearing a sound) triggers another response in another sense (visualizing a colour). “AP possessors and tone-color synesthetes show similar additional activations for the early cortical processing of music compared to non-APs and non-synesthetes, but distinct patterns of functional activations for perceptual associations, categorizations, and affective processing,” says a study on ICMPC.

Can Valproic Acid be the key?

Takao Hensch, professor of cellular biology at Harvard, is trying to create a drug that enables adults to achieve the perfect pitch. On NPR Classical, Hensch explains that valproic acid, a mood stabilizer, allows the brain to absorb new information as easily as it did before age 7, as it directly affects neuroplasticity. He gave the pill to a group of people who had no prior musical training and, at the end of a two-week trial, they were tested on their ability to discriminate tone. The results were, in his words, “remarkable” since there are no reports of adults acquiring perfect pitch. That pill could be used also to teach languages.

Give it a try!

Perfect-pitch training courses have been offered since the early 1900s and results generally failed to meet the expectations of all hopefuls who attended them. However, if you want to know if you “have it,” or if you simply want to spend time playing a curiously addictive game, just try one of the zillions of youtube videos available. 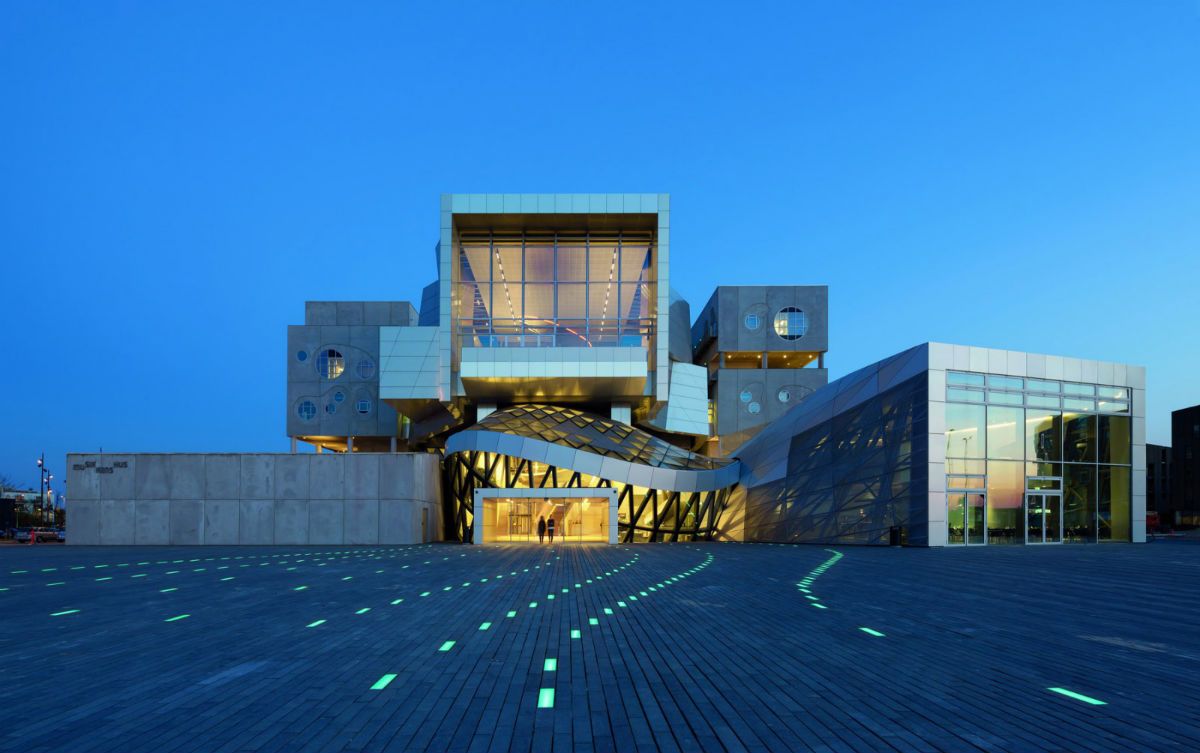 CMUSE - Jul 20, 2014
Designed by Austrian firm Coop Himmelb(l)au, this multifunctional center is a marvel of Solar passive design and features a south-facing facade covered with thin-film...