This article is going to give two highly important periods of Western Classical Music a chance to square up to one another and discover how they compare. Could it be that one period of musical history has extensively more to offer the performer and the listener than the other, or are they equal in their musical offerings?

Periods of Classical music reflect the ages in which they existed. Culture, economics, society, politics all influenced and to some extent governed the development of music during these times. Each period of music is also built on the one that preceded it even though what it then comes to represent is frequently in contrast to it. By this, I mean that the musical and social conventions that were common in the classical period travelled through the Romantic period and enabled the new ideas to flourish.

Music of the classical period then reflected the baroque but also rejected it too. The gilt-edged, ornate opulence of the baroque was discarded in favour of a more modest and streamlined musical model. Likewise, the Romantic period moved away from the elegance and measured control of the classical period towards increasingly larger and complex music in an effort to more fully express the great range of human emotions.

This change in focus is key to understanding another difference between the periods of music. Classical music was highly expressive and communicative but the romantic composers drew perhaps an even greater focus on the human condition and the struggle of the spirit.

The difference here is in respect of the pure numbers of performers. Even in the late symphonic works of Haydn, the composer would not have called for many more than 50 performers whereas the late romantic symphonic works regularly require in excess of one hundred performers.

There were significant developments in the instruments themselves across both periods of musical history. The piano began in the times of Mozart and Haydn developing to the piano we recognise today as the concert grand. Woodwind instruments developed more complex key-work to cope with the demands made by classical composers.

Brass instruments established valve systems that brought a greater range and technical possibilities that the natural instruments could not offer. These steps forward were furthered significantly in the romantic period and encouraged the rise of the virtuoso performer who in a very real sense became the struggling hero ever popular during this era.

From the orchestra, choir, piano, string quartets came very different types of musical composition during these two periods of music. The symphony began in the classical period as a three or four movements musical form with a duration of around twenty minutes. As the symphony developed in the romantic period the form dramatically changed towards a more unified structure.

Symphonies that were thematically linked (Berlioz idée fixe for example), evolved and four movements became one continuous piece. The romantic symphony often had a programme or was inspired by literature leading to the tone poem and gigantic works like the Symphonie Fantastique by Berlioz or Mahler’s “Symphony for a Thousand”.

This, in turn, meant that the musical structures changed too. Familiar forms from the classical period like sonata form, rondo, ternary, variation form, all tended towards dramatic expansion in the romantic period. The gentle confines of periodic phrasing from the classical period grew into lengthy, extended melodic expressions that soared across the new expanses of the developed forms.

The romantic period pushed the older musical forms to breaking point, and in some cases where they are no longer recognisable. The composers focused on the facility to fully express the richest emotions in the romantic period often to the detriment of the composition which could be prolonged far beyond the natural possibilities of the musical material.

Whilst the classical period remained tonal (even in Mozart’s ‘Dissonance Quartet’), the romantic composers eventually drove tonality towards destruction. Harmonically the periods differ widely in this respect. Even though there are examples of highly intricate classical pieces they do not come close to the intense chromaticism that underlies the works of composers like Wagner, Scriabin and Schoenberg.

In many of Wagner’s compositions, the idea of a tonal centre, that dominated the classical models, vanishes in a haze of ever transient harmonic movement. Arnold Schoenberg then took the next step and devised his own harmonic system that completely dismissed tonal harmony. The gradual dissolution of the tonal framework that threaded its way through classical music began even as far back as the later works of Beethoven. Beethoven spanned both classical and romantic periods and in many ways prepared the way for the composers that followed to further develop his harmonic and structural innovations.

If we judge the classical and romantic periods in terms of the scale then the romantic period would win. The concertos and symphonies were almost demonstrations of excess and indulgence compared to the measured, concise classical pieces. If however, we are looking more completely at the music itself, then both periods produced remarkable works in their own right. The classical period gave rise to the romantic and in that sense they are inseparable. 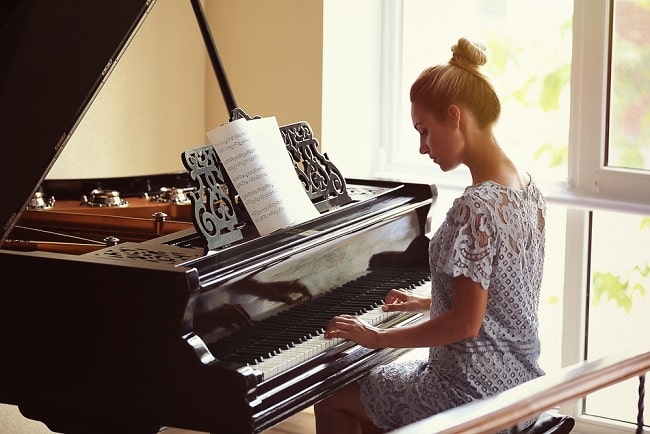 CMUSE - Sep 4, 2019
Learning to play the piano without a teacher is quite possible these days.  There are so many lessons, videos, and resources online.  With a...